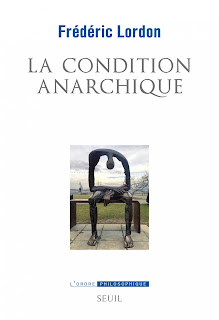 A glimpse of the cover, title, and timing of Lordon's latest book, La Condition Anarchique might lead one to suspect that the anarchic condition it refers to has something to do with financial crises. Which goes to reaffirm what they say about books and covers. The anarchic condition that Lordon is writing about not only has nothing to do with anarchism, nor with some kind of chaos, but with the very existence of values and norms.

Lordon makes a distinction that you would expect to find in a book by a Heideggerian, between arkhé as first principle, as authority, and order, and cratos, as force of domination. We live in a world devoid of arkhé but defined by cratos, by various sorts of rule. This anarchy not a historical condition, but in some sense the human condition. As Lordon writes, "Anarchy becomes the concept not for a political science but for a critical axiology."


Lordon is a Spinozist not a Heideggerian so the basis for this inspiration is not some "anarchic" ontological condition, but Spinoza's statement in EIIIP9S. As Spinoza writes, ‘it is clear that we neither strive for, nor will, neither want, nor desire anything because we judge it to be good; on the contrary, we judge something to be good because we strive for it, will it, want it, and desire it.’ This inversion of values, from qualities of things to effects of desire is complete by Spinoza's examination of the conditions of desire. Desire is shaped by the affects, by the encounters and relations that make up social life, and for Lordon, most notably for the common affects that define political life. As Spinoza defines them in the Political Treatise,