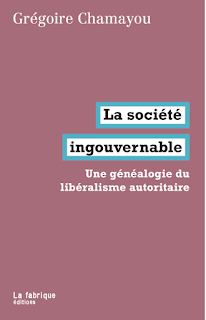 Perhaps the best way to make sense of the present order is to consider first the disorder, the contestation of the old order. This could be considered the autonomist hypothesis applied to politics, and it is the underlying method of Grégoire Chamayou’s La société ingouvernable: Une généalogie du libéralisme autoritaire.


The focus of Chamayou’s book is “ungovernability,” more specifically the ungovernability that was a kind of interregnum between the Fordist/Keynesian order of the post-war years and the neoliberal order of the later years. As Chamayou argues ungovernability has two poles; first, there is ungovernability from above in a breakdown of legitimacy and authority and there is ungovernability from below as a new form of revolt emerges. These two combine and often do. In the case of the seventies Chamayou sees both combining. First, on the side of the ruling class there is a major transformation of the modality of class rule. The shareholder, and realizing shareholder value, displaced the capitalist as owner and controller. The separation of ownership from control led to a question of authority on both sides of the divide: on the one hand there is the emergent managerial class but on the other there is the stockholder who has increased control over the production process with less connection and commitment. Second, this period saw the rise of contestations of capital. Chamayou mentions not just the worker revolts of the seventies, but also more passive forms of revolution such as the absenteeism of the period. However, his primary focus is not only much broader, examining the way in which capitalist profit came under external criticisms as well; the ecological movement, the anti-apartheid movement, and other social issues contested capitalist control from the outside the factory or the firm. As Chamayou argues this new order is predicated on recognizing a new terrain of struggle. If before business had primarily to deal with class struggle in the workplace and competition in the marketplace, the latter half of the twentieth century corporations increasingly found themselves dealing with a third form of conflict, external social conflict, as business interests find themselves confronted with various social and political agendas hostile to profits and control. What interests Chamayou is less the resistance than how this resistance was countered and coopted. This is a study of reaction, or, more to the point how a new form of governability, one that is more favorable to the rule of capital, is constructed out of the old one.