Year of the Wolf, Part Two : On The Howling 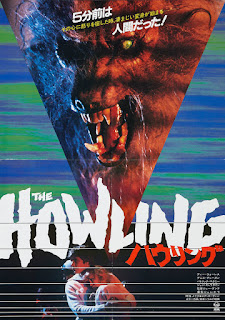 Years ago I wrote what I jokingly consider my contribution to "Wolfen Studies."The other contributions to the field being Evan Calder Williams Combined and Uneven Apocalypse and Alberto Toscano and Jeff Kinkle's Cartographies of the Absolute.  In the comments to that post it was pointed out to me that Wolfen was one of three werewolf movies to be released in 1981; the other two films were The Howling and An American Werewolf in London. I initially thought of writing a post on all three, but dropped the idea. Now, years later, I returned to the notion. This October I have been watching a lot of old horror favorites from Hammer films to some classics from the eighties. I decided to rewatch The Howling.
After an opening credit sequence that foregrounds not only the television news setting of the film, but the disorienting nature of television--the images are of test patterns and scrambled images--the film opens in Los Angeles Red Light district. A reporter, Karen White (Dee Wallace) is going to meet with a suspected serial killer, Eddie Quist. She is wearing a wire and under police surveillance; and her actions are being followed in the newsroom where a psychiatrist is being interviewed (and is prepared to offer expert commentary). The forces of order, police, television, and psychiatry are assembled into a unified front. Against them stands the red light district itself reconfigured as a kind of new barbarism, a wild nature at the heart of the city. The interview with the psychiatrist provides the verbal framing of this descent into nature as he wonders about what civilization has done to our beastly, animal nature. The urban jungle has become our new jungle.


Karen's journey through the pornographic video store is a funhouse mirror of fears. As she walks in all of the men in the store awkwardly fold up their magazines and walk out, caught in their two dimension fantasies by a real woman. Whatever power Karen wields is quickly dissipated as she steps into the video booth. Eddie is behind her, and he starts the film, a stunningly graphic portrayal of a women being stripped, tied down, and gagged by two men. It is at this moment that Eddie begins his transformation into a werewolf. He is interrupted by a cop who shoots through the walls of the booth, but the film has already made its point abundantly clear. The beastly animal nature is sex. (I just so happen to be watching season two of The Deuce now as well, and it is striking how much this film anticipates the former's little red riding hood in Times Square).

After Karen's traumatic encounter in the pornshop, she takes the advice of the television psychiatrist  Dr. George Wagner (Patrick Mcnee)to head to his retreat in the woods north of LA. It is at this point that the triumvirate of order begins to unravel and the film shifts into a different sub-genre, that of the cult or conspiracy film. No sooner do Karen and her husband Bill Neill (Christopher Stone) arrive at The Colony, as it is called, than things begin to look suspicious. The conflict shifts from men versus beast, and the beast within, to the more intimate conflict of married life. Karen White, she kept her maiden name, is much more famous, successful, and brave than her husband, a former Stanford football player who now owes a few fitness clubs. Her abuse at the hands of Eddie in the pornshop has left her understandably uninterested in her husband's sexual advances. These marital conflicts send him straight into the arms of the first available werewolf he meets. This is not the horror of becoming a werewolf, at least not yet, but the horror that those around you are already something monstrous, in this case men.

We soon learn the true functioning of The Colony. It is a retreat for werewolves. A place where Dr. Wagner can help them adjust to a modern world. They kill livestock instead of humans, for the most part, and have plenty of dark woods to roam around. It is the perennial farm with lots of place to run around. Psychiatry transforms a supernatural curse into common everyday leash aggression. It turns out that there is a split in this retreat. Many of the werewolves are unhappy with their domesticated life on the farm, and rebel against the doctor's rules. All of this explodes in the final conflict which brings with it the requisite silver bullets.

In the end, the film returns to the newsroom where it opened. Only now the perspective on the triumvirate of order has changed. The police have proven to be ineffective if not thoroughly corrupted. Psychiatry has has failed to stem the tide of aggression and anger. Dr. Wagner is a werewolf too, and when he is shot by silver bullets he exclaims "Thank God." It is unclear if he is grateful for being freed from his unholy curse or from his curse of peddling a compromise he knows does not work. The last hope is the power of television itself. In the escape from The Colony Karen has been bit by a werewolf. In the scene that everyone remembers long after they have forgotten the film, she transforms into a werewolf on live TV. The film's coda suggests that the power of television is also fading. A montage of scenes show us an audience that views the transformation as gimmick or special effect, anything other than believing the monstrous truth.


Rather than gives us the typical closed loop in which the beast is vanquished and order is restored, The Howling suggests that order was never there to begin with.