Halo's Return: Two Versions of the Religion of Capital 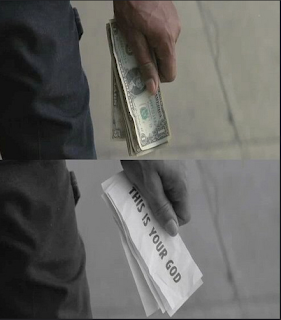 Image from They Live


Sometimes students ask me if I think that Marx was wrong about anything. Marxists are supposedly not known for independent thought. I always have a quick and easy answer, the point of reference is not something deep in Volume Three, but in one of the most well known and most cited passages of all. I am referring to the following passage from The Communist Manifesto.

It begins as follows...

The bourgeoisie, wherever it has got the upper hand, has put an end to all feudal, patriarchal, idyllic relations. It has pitilessly torn asunder the motley feudal ties that bound man to his "natural superiors", and has left no other nexus between man and man than naked self-interest, than callous "cash payment".

And culminates with the famous lines...

Constant revolutionizing of production, uninterrupted disturbance of all social conditions, everlasting uncertainty and agitation distinguish the bourgeois epoch from all earlier ones. All fixed, fast frozen relations, with their train of ancient and venerable prejudices and opinions, are swept away, all new-formed ones become antiquated before they can ossify. All that is solid melts into air, all that is holy is profaned, and man is at last compelled to face with sober senses his real condition of life and his relations with his kind.

In a word this is Marx's identification of capitalism with modernization, or, as the kids call it today, "acceleration." To say that Marx got this wrong is a bit too strong. First, in that this is a Manifesto; its statements are split between description and prescription. Its statements on the over all logic of history is less a contribution to the philosophy of history than an attempt to convince the would be communists that the tide of history is with them. The ceaseless revolution being nothing more than the preface to capital's self destruction. Second, and perhaps more importantly, after 1848 and onward Marx would become increasingly skeptical about capital's tendency to strip away all previously held illusions. From ideology to commodity fetishism to even the obscure lines in Volume Three about the "religion of daily life" Marx not only theorized capitalism's tendency to create its own illusions, but increasingly framed those illusions in terms of religion and mystification.

Marx's rectification of this logic of modernization is incompletely phrased and framed, like many of his later developments it is subordinated to the ongoing critique of political economy. There is no short and pithy formulation of the differential temporality of capital, to take Althusser's formulation. It would have to be read between the lines if not invented whole cloth. With respect to the latter I would like to briefly examine together three formulations that attempt to rethink the connection between capitalism and religion in terms of both the former's historical logic and rationality.

As the title and target of Deleuze and Guattari's book indicates, the overall trajectory of history is one that goes from Oedipus the despot to the oedipal complex. What first existed as public spectacle returns as private drama. This trajectory is not limited to Oedipus; what Deleuze and Guattari refer to as reterritorialization is the reconstruction of structures of authority and belief on new more internal and private grounds. It is not just that the family, especially in its more authoritarian frame, is a little state where dad plays the despot, but the internalized terrain of authority is fueled by its public collapse. The meaningless abstraction of capital gives rise to new territories of meaning and authority.

What is often overlooked in the celebrations of Deleuze and Guattari's "accelerationism" is that in breaking with the Manifesto they hew closely to the later volumes of Capital. As Deleuze and Guattari write, “Capitalism can proceed only by developing the subjective essence of abstract wealth or production for the sake of production…but…at the same time it can do so only in the framework of its own limited purpose, as a determinate mode of production…the self expansion of existing capital.” For Deleuze and Guattari this contradiction, even if they do not call it that, has to be understood as not just the economic crisis of capital but is also the basis of its cultural logic. This is why we live a world divided, split, between revolutionary transformations and reactionary revitalizations. Capitalism may constantly revolutionize, but that only fuels reactions at the level of the family and the state.

André Tosel is much more explicit in framing this problem in terms of the difference between the Manifesto and Capital. The Manifesto has no concept of fetishism, or even ideology, all symbolism is dissolved in the icy waters of calculation. It is worth noting that this idea of "desacralization of the social bond" is still continued in such thinkers as Alain Badiou. Tosel argues that Capital posits a different relation, a destruction of all preexistent religious symbols combined with the ambiguous resacralization of money and value.

Understanding the ambiguity of these new symbols requires two brief detours into Tosel's theory of religion and capitalism; the remarks that I am citing appear in the two volumes of Scénarios de la mondialisation culturelle. Tosel's general theory of religion is more Spinozist than Marxist, more constituent practice than a heart in a heartless world. All religions are part of the constitution of collectivities, collectivities that constitute themselves through the creation of an other, a transcendent ideal and origin, an affect of the immanent organization of imagination and affects that necessarily appears as a cause. Tosel, in a manner somewhat akin to Peirce or Lacan, refers to this symbolic dimension as Third, as an other, that presents itself as outside of social conflict but internal to the constitution of the individual. As Tosel says it is transindividual. Religion is part of what constitutes a people as a people, to which Tosel adds that Marxist caveat that any such unity is beset by divisions and contradictions. Any unity is necessarily a hegemony.

Capitalism has a particular relationship with this process. It does not so much constitute a people as abstract from every condition of belonging. In doing so it presents its institutions, its conditions, not as part of a particular people, a culture, but as rationality as incarnate. The effect of this is a paradoxical deepening of the divisions of humanity. Those outside of its logic are outside of humanity altogether.

"Capitalist globalization appears thus as a process that reunites incompatible extremes. It is an oxymoron realized. It is presented, in one aspect, as universalization of economic, social, and political processes, that are supposed to represent the nec plus ultra of history (democratic regimes, free enterprise, global market, internet, prison). Its other aspect is a mega-machine that fragments, hierarchizes, eliminates, every "other" that it encounters."

This oxymoron has profound effects on the symbolic order. Capital cannot constitute a transindividual symbolic order. It creates something more like superstition than religion, symbols of an impersonal and indifferent force to which one must adhere, only that force is now social relations not nature. As Tosel writes:

"The symbolization of individual works under the other of quantized abstract work is lost as the determination of this socialized work takes on an autonomous value...The value in itself, which takes the form of Money and Capital, is a pseudo-third, an effective third, however, which absorbs the symbolic dimension of socialized labor into its imaginary mobile automaton."

There is a great deal that could be said about the similarity of Deleuze and Guattari and Tosel's approach. A similarity that stems from incomplete lines of inquiry in Marx. The difference is no less striking. First, Tosel, does not see capital as dispensing with code, with symbols, to engage in purely quantitative axioms. Capital's symbols are not the private codes, but encompass the public symbols of money and value, symbols that compel without meaning, symbolize without individuality or belonging. Second, as I have already hinted, Tosel's finite communism is an argument against accelerationism, against the attempt to push capital's abstraction and indifference towards some liberatory end.

One could conclude then that anti-capitalist politics necessarily need to be predicated on some return to symbols of belonging and exclusion. As Fredric Jameson argues in an aside in his essay "Deleuze and Dualism," "One of the crucial theoretical arguments about socialism today surely turns on this distinction as well, i.e, on whether socialism and other proposed alternatives to capitalism, such as Islamic fundamentalism, do not also require some "extra-economic" motivation." Jameson's formulation would already suggest the dangers of such revivals of the symbols of religion or nation. If neither jetting forward nor reviving the past is possible then the solution would seem to think through a new relation between symbol, or imagination, and abstraction, or reason.

There are echoes here of Balibar's Spinozist politics, another politics of finitude, in which imagination and reason are insurmountable aspects of every individual, every political relation. Or, as Tosel puts it:

"The disjointed unity of subjectivity and identity is the structural condition of humanity; it is a tension of two moments, that of a generic equivalence which makes each and everyone share the same power to exist as a human being--living, working, speaking--and that of the differential play of identities, of the difference which characterizes each specific human and which qualify belonging."

Capitalism, like any mode of production, is a particular articulation of this structural condition. One in which the equivalence is quantified, rather than symbolized, and identies are increasingly privatized. To add a third reference, Grégoire Chamayou's La Société Ingouvernable: Une généalogie du libéralisme autoritaire, argues that neoliberalism has its own specific double movement. As much as neoliberalism destroys any appeal to a public good to competing private interests it also moves towards "responsibilization", a highly individuated response to social problems. As Chamayou writes,

"Economic irresponsibilization and ethical responsibilization, the concrete dissolution of cultural mores and the abstract appeal to moralization, these two directions form a contradictory unity. It is not enough to denounce the duplicity; the crucial question in each situation, would be to know how to push the contradiction, convert the moral dilemma into a political conflict."

What must be called politics is another articulation, another relation, of abstract subjectivity and concrete identity, of social relations and individualization, another experience of collectivity, of transindividuality.

Posted by unemployed negativity at 12:02 PM