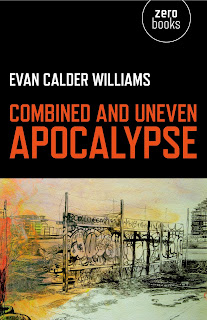 The following statement from Fredric Jameson is well known and often cited, becoming something like a pithy formulation of the contemporary political imagination, "It seems to be easier for us today to imagine the thoroughgoing deterioration of the earth and of nature than the breakdown of late capitalism; perhaps that is due to some weakness in our imagination." One way to read Evan Calder Williams’ forthcoming Combined and Uneven Apocalypse is as an exploration of the concealed conjunction in what Jameson’s statement disjoins: what is the connection between all these images of the end of world, these post-apocalyptic wastelands, collapsing cities, and worlds overrun by zombies, and the end of capitalism, the end that we imagine and desire? Not the end of the world or the end of capitalism, but both at once (and one through the other).

Williams’ book covers many of the themes that I have covered on this blog, zombies, Wolfen, and of course the post-apocalyptic genre. However, where I have dabbled in these topics, scribbling a few lines here and there, Williams brings a focused investigation, continuing the Zero Books tradition of merging sustained intellectual engagement with an attention to popular culture. Williams’ book is a work of post-apocalyptic criticism: it reads the various images of the end, examining them for how they envision or fail to envision the end of the world, but it also examines us, our preoccupations, from this end. It asks what will remain of this world, our commodities, our obsessions, ourselves, after it comes to its inevitable destruction. It is thus an enterprise of salvage, of constructing another world from the gutted remnants of this one.

The book deserves a lengthy response, more than I have time to dedicate to it here and now. It also seems odd to review, in any thorough sense, a book that has not been released yet. There is after all no possibility for critical discussion. So I thought I would offer a few remarks on a few citations, citations coupled with their corresponding visual elements. The book is very good at reading films, paying close attention to their logics and visuals. Thus it seemed fitting to pair image and text in order to do just to the book's attentiveness to the intersection and disjunction of each.

That the book discusses The Road Warrior, perhaps goes without saying: the film has such a massive influence on the entire apocalyptic imaginary, and is being remade again and again. What is interesting, however, is the attention that Williams brings not to the familiar aspects, the mohawks and motorbikes, but to the often overlooked opening montage.

“What’s striking here neither the severity of the envisioned apocalypse nor its ideological inconsistencies, but the way that it salvages established narratives of the war against fascism and social progress and uses them otherwise. In this case, to inscribe an anti-modernization polemic in which all roads end in gasoline-obsessed hoodlums prowling the post-oil desert. So, in turns out, the slaughter on the Normandy beaches and the Maginot Line were about the panic of disappearing “black fuel.” The barricades of May 68: what are they if not a “firestorm of fear,” the frantic clawing of the masses in the “nothing” that follows the end of affordable oil? Furthermore, the films are not set in the future: the historical images are drawn from and lead up to the time in which the film was made. As such, they aren’t a projection of the far future, but a reinscription of previous events so as to make the “real world” present genuinely apocalyptic and to enable a flight into another type of fantasy.”

Williams is not interested in this as prophecy, as peak oil avant la lettre, but as the way it imagines the present. After all, the series of images end with the present in both senses, with the present of the film's date (the early nineteen eighties) and the present depicted in the film as a “white line nightmare.” The introduction rewrites history as a history of warring tribes, in some sense naturalizing a battle of all against all. Williams does not comment on what has always struck me about this introduction and that is what is conspicuously absent from it; namely, the familiar mushroom cloud of atomic war. This will be included in the third film, Mad Max Beyond Thunderdome when a different history of the present is given, one that is not a cinematic montage but a mash-up of different historical modes of narrative and visuals: storytelling, cave art, radio sound effects, View-Master. I have always found that little bit of rewriting curious. Why not include the iconic image in the second film? Or why does everyone assume that the bomb has been dropped in the second film? Is it possible that the second film was simply received as post-nuclear war because that fit into the anxieties and fears of the eighties? If nuclear war is not part of the trilogy's narrative, then why included in the third film? Is it a matter of rewriting the narrative to conform to everyone’s expectation?

That the bombs never fell, or The Bomb never fell, in the second film is its most utopian dimension, suggesting that the demise of society is more about our fascinations with cars, property, and weapons than the world becoming unlivable. The locations of the two films suggest this as well: the first is shot in the outback, which is still populated, as much as it ever was with rabbits, snakes, and dingoes. It is still relatively green. The third film, however, is shot in the desert, a desert where nothing lives, or could live (with the exception of the oasis where the children reside).

Williams returns to this reading of The Road Warrior later in the book, contrasting it to the closing credits sequence of Wall-E.

“This sequence only makes full sense when compared with its inverted partner in crime, the opening of The Road Warrior discussed earlier. In both cases, a rescripting of inherited cultural images is used to situate the present of the film in terms of a constructed lineage of Western history as such. Yet while the peak oil catastrophe image story of The Road Warrior describes its present moment (the time of the film’s narrative and the early‘80s historical moment when it was released to the “real world”) as the descent into the apocalyptic collapse, the cooptation of art styles serves to describe a different arc in Wall-E. It’s telling that it does not include any approximations of painting after Van Gogh: like the gentle techno-ethos of steampunk, the narrative it tells never gets to the full technocracy, chaos, and pollution of the 20th century, resting instead in the slow pastoralism of its last image before black. And furthermore, we’ve already seen the final image in the story, the entire film of Wall-E itself. Retroactively, the film we have seen itself becomes the last image in the sequence, a clue to the lurking darkness behind the move forward. A move forward that, like the conclusion of the Mad Max trilogy, means going back, starting over, and “getting back to basics,” even as the post-post-apocalypse it describes is a return to the normal of late capitalism.”

Here the continuity is not that of Hobbesian conflict, which is presented as our past, present, and future, but that of technology. Technology is the disease and the cure in Wall-E: it has made us docile, passive, and pathetic, but it is only through it that we can claim and repopulate the earth. Williams criticizes this failure to engage with the apocalyptic, to think about how far we have already gone over the cliff, and how much we will have to change, socially, politically, and aesthetically.

Williams also points to the fascist themes of homeland and soil, of a cleansed and reborn race, that animates this segment. This is one theme that I wish there was more of in the book. Brian Massumi once called survivalism a uniquely American form of fascism, and it too is part of the post-apocalyptic culture. Ultimately, The Road Warrior and Wall-E can only indicate politics, economics, and social relations negatively, it is at the limit of their oddly circular and thoroughly naturalized histories, in which the past is the future and vice versa.

There is also a great reading of Return of the Living Dead.

Posted by unemployed negativity at 1:26 AM