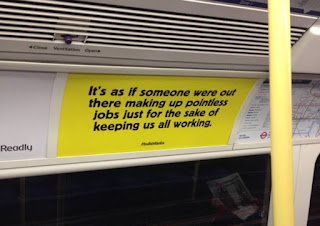 Graeber's book Bullshit Jobs is the kind of book I generally avoid. It is an expanded version of an essay originally published in Strike magazine. For the most part I find articles turned into books to be largely filler. The original essay or article made the point, and did so succinctly; expanding it into a book largely entails adding more and more examples with maybe a little bit of context and clarification. However, Graeber's essay was provocative enough, and close enough to my interests that I decided to read it.
The first question to consider is how does Graeber expand the original essay. He does so first by beginning with the original effects of the essay. An essay that went "viral"; it was shared so many times that it crashed the site, and became the basis for a guerrilla art project as well as many online debates and discussions. Graeber made some of this reaction into research, and much of the examples that expanded the book come from responses to the various reposting of the original essay and a twitter account dedicated to the phenomenon. These responses do not constitute anything like an accurate basis for a survey, but they do flesh out the concept with multiple examples of people whose jobs have no other purpose than filling up time and looking busy.

Along with the examples there is an attempt to clarify and differentiate the concept, offering both a sharper definition and a taxonomy of distinctions. Graeber argues that what distinguishes a bullshit job is primarily the subjective element--how it is experienced. As Graeber writes, "I define a bullshit job as one that the worker considers to be pointless, unnecessary, or pernicious--but I also suggest that the worker is correct." Within this general definition Graeber provides a taxonomy of different types of Bullshit jobs: "flunkies," assistants or other people made to make someone look important; "goons," those whose very existence is driven by the escalation of corporate tactics and strategies; "box tickers," those whose sole purpose is to show that some requirement is being met or need addressed (even if they never address it--like corporate wellness programs); "duct tapers," those who exist only to solve problems that would not exist if things were done right the first time; and lastly taskmasters, those who create extra work for others. What unifies these different tasks is less some structural transformation of laboring conditions, the rise of service, communication, or affect as dominant aspect, than the feeling of being caught up doing something that is pointless or pernicious.

It seems to me that the concept of "bullshit jobs" could be understood as an expansion of Marx's concept of alienation. In the famous section of the 1844 Manuscripts Marx on Estranged Labor outlines four aspects of alienation: alienation from the object, the product of labor; alienation from activity, from the labor process itself; alienation from species being, from the potential and possibility inscribed in being human; and lastly alienation from others, from other people. To this Graeber adds "bullshit" as an alienation from the very capacity to do something, to have some, hopefully positive effect on the world. This could be seen as a variation or expansion of alienation from activity, but now the point is not simply that one is alienated from the means and methods of the activity, not able to dictate how or when one works; it is an alienation from the activity as having any effect whatsoever, the alienation of doing nothing but filling time (and looking busy). Graeber draws on the psychologist Karl Groos who documents "the pleasure of being a cause," the joy a child finds in having an effect on the world, to explain this alienation. (I am only going to mention parenthetically how Spinozist this sounds). Bullshit jobs alienate us from our capacity to produce or do anything, to have any effect whatsoever.

"Whats more, in bullshit jobs, the ability to perform acts of make-believe, which under ordinary circumstances might be considered the highest and most distinctly human form of action--especially to the extent that the make believe worlds so created are in some way actually brought into reality--is turned against itself."

In Marx's original notebooks the most human activity that which sets us apart from the animals, labor, is turned into its opposite in capital, into a brute animalistic struggle for survival, repetitive and dehumanizing. "What is human becomes animal and what is animal becomes human."Graeber makes the same point with the bullshit of "looking busy." Human creativity is subordinated to the dead time of looking busy. The shift from an anthropology of production to an anthropology of creativity can be seen as emblematic as the difference between Marxism and anarchism.

Graeber's emphasis on the subjective aspect of bullshit underscores a fundamental limit to the concept of alienation. A limit that has less to do with its foundation, as Althusser famously argued, than its effects. Drawing from my own unscientific sample of teaching "Estranged Labor"in various classes from Political Philosophy to The Philosophy and Politics of Work for fifteen years I could say that it is a text that resonates with some people but not with others. It is subjective in the banal everyday sense of the word. Some people get it, and find the alienating effects of labor to be "relatable"--to use the parlance of our times, and others find it be at best "dated," a relic of some Dickensian past, and at worst beside the point--arguing that the workers are paid for their alienation, and that the alienation is more than made up for by the pleasures of consumption. Work hard, play hard is, after all, the ethos of our times. It seems to me that Graeber's book falls into exactly the same problem. Or at least that was my experience the one time I taught his initial essay. That is the problem with polemics in general: either you get it or you don't.

Since I brought up Althusser, I should mention that it is possible, at least heuristically, to think of the "break" of sorts between the young and mature Marx to be the shift from alienation to exploitation. Alienation, which dominates the early writings, is something subjectively experienced; exploitation, which is theorized in Capital, is not necessary experienced. The difference between necessary and surplus labor goes on behind the backs of producers. Alienation is experienced, but exploitation is necessarily effaced by the very structure of the labor relation. This is not meant as a real account of any break, I have no reason to believe that Marx saw the polemical limits of alienation, but a way of reading the two concepts. 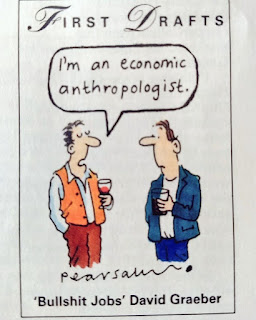 
Graeber is not uninterested in such a distinction. As Graeber writes, "The deeper structural forces that drive such historical changes, in turn are not the same as the cultural and political factors that determine how the public and politicians, react to them." Graeber is stronger on the former than the latter. He tries to address the paradox of "bullshit jobs"emerging in an era defined by productivity and efficiency, but can offer no real economic basis for this paradox. He sometimes explains this rise by stressing the continuity between managers and feudalism, vice presidents and associate deans as the new retainers, and sometimes by arguing that all of these new bullshit jobs are attempts to quantify the unquantifiable, to measure the social dimension of labor. Two tendencies that can be seen in the university.

Where Graeber lags in terms of structural conditions he excels in terms of social and cultural factors. He ventures outside of his skewed sample group of people telling him about their bullshit jobs to ask the question "Why do we as a society not object to the growth of pointless employment?" His answer is to define a particular "paradox of modern work." This paradox has two elements:

1. Most people's sense of dignity and self-worth is caught up in working for a living.

2. Most people hate their jobs.

Or, more to the point, "Workers, in other words, gain feelings of dignity and self-worth because they hate their jobs."

This explains the particular negative solidarity around work, the resentment towards those not only who are perceived to not work (unless they are rich), but even those who get to make something useful or do something meaningful. Graeber's example is the attitude towards autoworkers during the 2008 bailout, but we could include teachers for a more contemporary example who are held in contempt by so many precisely because they are seen to do something meaningful and rewarding. The pointless and futility of one's job is not a bug of the current economic system, but a feature, keeping everyone working and working against everyone else. As Graeber writes, "A crisscrossing of resentments increasingly defines the politics of wealthy countries. This is a disastrous state of affairs."

Thus, to conclude, new theories of alienation may be helpful in giving voice to the frustrations and pains of contemporary society, theories of exploitation are necessary for understanding the causes of such frustrations, but the real work, the work of politics is in the place where these two concepts do not overlap, in understanding how people can be exploited but not alienated, fighting for their servitude as if it was salvation. Or to put it bluntly, it is more interesting to know why people do not see their jobs as bullshit, see the reduction of work as a problem, than to have a taxonomy of all the ways in which jobs are seen as bullshit. 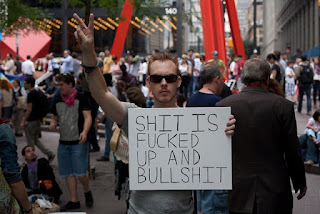 Posted by unemployed negativity at 9:48 PM