Putting the Living Back into Living Labor, Part One: Dejours and the Psychodynamics of Work 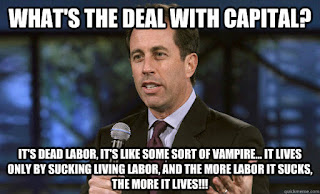 In the introduction to Travail Vivant et Théorie Critique: Affects, Pouvoir, et Critique du Travail Alexis Cukier argues that the critique of the domination of "dead labor" over "living labor" cannot remain at the level of social relations, as a critique of the wage form and employment, but must descend into the "black box" of labor, and produce a theory of "living labor."

The term living labor is of course derived from Marx, but it has less of a rigorously conceptual demarcation, as in the case of the dialectic of abstract and concrete labor, than a definition that ranges from the polemically dense, the famous opposition between living labor and the dead, or living dead labor, to the conceptually suggestive, as in The Grundrisse. Cukier and his collaborators are less interested in living labor as a concept that can be developed through a reading of Marx than the way that it has been developed after Marx. He sketches three different conceptualizations of living labor at work in contemporary thought. The first is to be found in the writings of Marxist Spinozists from Negri to Lordon, in which the living of living labor is the conatus and its striving; the second is to be found in Michel Henry in which the living is the irreducible singularity of the living subject; and the final is the critical psychoanalysis of Christophe Dejours in which the life of labor is related back to the psychic life of drives. As much as it is possible to reduce these different conceptions back to their theoretical sources, Spinoza, Phenomenology, and Freud, outline the fundamental triad of influences in contemporary French thought it is perhaps more interesting to think of them as different attempts to conceptualize the subjectivity and sociality of labor.

Taking Cukier's statement as I provocation, and because I am working on developing a larger project on the philosophy and politics of work, I decided to work through these different versions of living labor, starting with the two that I am least familiar with, Dejours and Henry. I will hopefully get to the latter in a subsequent blogpost, hence the part one, right now I am interested in the two volumes of Dejours Travail Vivant. 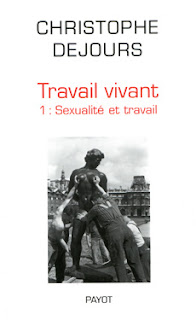 The first volume, Sexualité et travail outlines the methodological preconditions of an examination of the psychodynamics of work. In doing so Dejours must contend with the fact that Freud writes more of dreamwork than of work proper, and psychoanalysis places sexuality and not work as defining subjectivity. At the same time, and this is what perhaps justifies an entire book dedicated to what might otherwise be dispensed with in a preface, Dejours follows Jean Laplanche in understanding sexuality as the nexus constitutive of subjectivity. To put it briefly, it is because sexuality is a problem, caught between its early onset and latter development, between drives and social demands, that subjectivity is also a problem. Dejours argues that sexuality defines a fundamentally different philosophical anthropology than offered by political philosophy, one that focuses on the constitutive role of asymmetrical communication and embodiment. Thus, sexuality provides the template for understanding what Dejours calls, borrowing a term from Michel Henry, corporatization, the embodiment of subjectivity. Dejours cites Freud's remark from The Ego and Id that "the ego is first and foremost a bodily ego," drawing from from Freud and Maine de Biran to develop a theory of the development of understanding and awareness through the body. Work plays a primary role in this awareness it is situated between an imperative, something one must do, and a limit, the way in which the world does not conform to one's imperative or demand.Work is situated between prescription and execution, and it is in that space that not only one lives, but it is through that living that one forms a way of thinking and living. As Dejours writes, "The real is what is made known to the worker by its resistance to savoir-faire, to procedures, to prescriptions; More generally, what is revealed in the form of resistance to technical control, or even to knowledge." 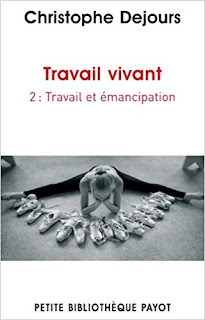 In the second volume, Travail et émancipation, this real splits in two. Work is simultaneously an encounter with a material world, a world that resists our intentions, and an encounter with an equally resistant social world. There are two "reals", physical and social, and these two limitations determine and define the world or work. One splits into two in case of the social. Dejours turns to Freud's Group Psychology and the Analysis of the Ego to demarcate two kinds of groups, or rather two types of organization at work in every group, one informal the other formal. In the case of work the informal group refers to the relations of informal cooperation that pass between workers and the instituted refers to the hierarchical relations between workers and subordinates. In Freud the difference between the lateral and hierarchical was understood in terms of ego or ego ideal. Dejours adds to this the dynamics of work itself, work is split, corresponding to a split in the ego between the suffering of the activity and its recognition. Work gets its meaning, its recognition from another.

These splits, between the objectivity and sociality of the real and the informal and formal organization, define the contours of the conflicts the labor relation. Conflicts emerge from the non-identity of the object and social dimensions of reality, working hard without being recognized or being recognized without doing the work. Two subjective figures familiar to anyone who has read the Phenomenology of Spirit or who has had a job. The cooperative dimension is also a site of conflict, especially as the capitalist organization of labor works to actively undermine the unorganized lateral cooperation of "coworkers," replacing them with the much more precarious and interchangeable "team members." Hierarchical control demands that lateral cooperation must be effaced an individualized. The "team player" is the subjectification, individualization, and effacement of cooperation. As with Marx's description of the commodity form, or even Freud's account of the psyche, the differences and contradictions are the lines of demarcation of crises and tensions.

Dejours sees the central crises of contemporary work to be in its individualization and constant assessment. These destroy solidarity, and that solidarity is the "pre-political condition of politics." Dejours borrows the term from Arendt, but shifts its sense; it is no longer plurality that is the condition for politics, but the specific plurality of the work experience which builds confidence and relations to others. Dejours argues that it is because work is epistemologically central, shaping our sense or ourselves and the world, that it is politically central. The contemporary world of work is designed, almost on purpose to undermine any confidence in oneself and others.  It produces only negative solidarity. As Bertrand Ogilvie writes, work is the black box of democracy, the condition of its creation and destruction.

It is tempting to put forth the thesis that the more one tries to develop the ontological or, in this case, subjective and epistemological dimensions of work, seeing in it some particular relation to the real, to reality, the less one can think in terms of its historical dimensions, its specific economic and technological dimensions. A variant on the eternal struggle against ahistorical concepts and categories. This works as a general rule of thumb, but it does not entirely capture Dejours' work. The second volume is in part devoted to the effects of contemporary managerial focused on individuation and quantification of productivity. However, it seems that a third encounter with the real is missing, not that of the material world or the social world, but the world of capital. To put it bluntly, individuals around the world are forced to work harder, or lose their jobs, not because they fail to transform the physical world or even the social world, but because their labor is no longer competitive, no longer profitable. This measure, this reality, is all the more traumatic in that it is not directly experienced. As Marx wrote, it is a "process that goes on behind men's backs." Capital confronts us a blind necessity, senselessly sustaining or destroying our relation to the physical and social world. In the end it perhaps not a matter of being historically specific in how one describes the labor process, incorporating the recent transformations of "human resources," although that is important, but of recognizing that the ultimate real of work is neither the world of objects nor the social world. It is the world of capital, the real is the real abstraction.

"Living labor" is a necessary and unavoidable starting point for any theorization of work. Work is experienced and it shapes much of what we know and experience, functioning as a quotidian last instance. At the same time, however, it is necessary to recognize that we live in the land of the dead, and the struggles and pleasures of work are shaped by this dead labour.
Posted by unemployed negativity at 10:16 AM