A Universal History of Villainy: A Brief Remark on Spider-Man: Homecoming 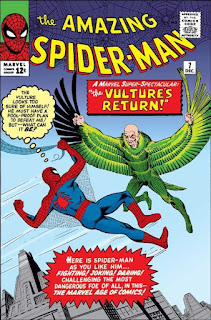 In Jameson's essay on The Wire there is an interesting digression (and in Jameson it is mainly the digressions which are interesting) on the problem of evil in popular culture. Jameson takes up the question of evil, of villains, more broadly, reflecting on both their decline and centrality to popular culture. To quote a long passage, or at least the important parts:

"This means that the melodramatic plot, the staple of mass culture (along with romance), becomes increasingly unsustainable. If there is no evil any longer, then villains become impossible too; and for money to be interesting, it has to happen on some immense scale of robber barons or oligarchs, for whom, to be sure, there are fewer and fewer dramatic possibilities today, and whose presence in any case recasts traditional plots in political terms, where they are less suitable for a mass culture, that seeks to ignore politics. (Or when it turns to politics, then we may begin to wonder whether something has not also happened to politics itself: the reign of Cynical Reason is also the omnipresence of the disabused conviction about the corruption of the political generally, and its complicity with the financial system and its corruptions—so virtually by definition this universal cynical knowledge does not seem to project any political consequences any longer.)...

...This explains why villainy in mass culture has been reduced to two lone survivors of the category of evil: these two representations of the truly antisocial are, on the one hand, serial killers and, on the other, terrorists (mostly of the religious persuasion, as ethnicity has become identified with religion, and secular political protagonists like the communists and the anarchists no longer seem to be available). Everything else in sexuality or so-called passional motivation has long since been domesticated: we understand it all, from sadomasochists to homosexuals—pedophilia being a minor exception here, to be classed as a kind of subgroup or subpossibility within the larger category of serial killers (who are generally, but not always, understood as sexually motivated). It is true that with mass murderers of the Columbine type we begin to shade over towards the political and here terrorism reappears, but the latter organized in terms of the radical otherness of belief and religious fanaticism, since little else remains. If we really grasped terrorism as a purely political strategy, then somehow its frisson also evaporates, and we can consign it to debates on Machiavelli, on political strategy and tactics, or on history.

I need not add that these two staples—terrorists and serial killers—have become as boring as the villains driven by "greed." Alas, as with the disappearance of the spy novel after the end of the Cold War, that boredom would seem to betoken an end of melodrama, which threatens to become the end of mass culture itself."

This might be the best way to approach, or at least historicize, the problem with villains in comic book movies, (the Marvel films in particular). I know that this might seem like overthinking things a bit. After all, the failure of the comic book villain can be understood as simply a translation problem from page to screen. It is easier to make the heroes of comics seem more sophisticated, to make a drunken Iron Man, a brooding Batman, and even a tortured Captain America than it is to make plots for world domination seem grounded. Who wants a realistic M.O.D.O.K. anyway? Or a relatable Kang the Conquerer. Second, the attempt to collapse the serial form of the comic into the big event movie has lead to villains which are nothing more the doubles of the hero, sharing the same origin for the sake of narrative economy, as in The Incredible Hulk, The Amazing Spider-Man, and Iron Man. More to the point of Jameson's remarks above, Hassler-Forest has argued, the dominance of the superhero film emerges with the war on terror, a war which can be approached through many allegorical mediations. Superheroes can save New York City from a catastrophic event again and again, but that is as close as they can get to the war on terror, or at least to the figure of the terrorist. Aside from Loki, who is carried by Tom Hiddleston's performance, there have been multiple versions of corruption punctuated by a few acts of revenge.

I tend to view superhero films as dramas of decline in multiple sense, decline of a particular idea of American Empire,  the battles of which have now been displaced onto the fantastic realm of mutants and monsters; of American Cultural hegemony, hence the increasing demand to include and decenter the US with respect to the globe; but also the decline of cinema, going to a Marvel movie increasingly feels like catching the latest episode in an ongoing series. The difficulty of creating a believable villain then stems from the fact that this decline is more of a collapse than a conflict. It is not pitted against any discernible opposition, the cold war is over and the war on terror is too vexed with anxiety to provide anything other than a general backdrop, but one that can only be viewed through the refraction of aliens and flying aircraft carriers.

The Vulture in Spider-Man: Homecoming is an interesting exception to the bland villains churned out by previous films. Forced by the sheer number of reboots, three in the last sixteen years, to go further and further down Spider-Man's rogues gallery the film is left with a B-List villain. Somehow it is easier to imagine three Spider-Men than it is to envision a different take on the Green Goblin. The villains are new, but the hero remains the same.


The film opens with a scene that takes us back to the world defining event of the attack on New York in The Avengers, something that appears again and again in the different films and shows, only now it is seen from the grounds eye, from the people who are left to clean up after it. Adrian Toomes is one such individual, an entrepreneur of sorts, who expects to provide for his family by cleaning up the destruction left in the wake. He has invested in trucks and crew, gone into debt to support this dream. He is soon sidelined by a combination of big business and government bureaucracy; he cannot compete with Tony Stark's connections and influence. His only choice, at least as he sees it, is to shift from clean up to contraband, manufacturing and selling weapons made from alien technology or bits of Ultron left scattered in the wake of the last superhero battle. Collateral damage continues to be the return of the repressed in the superhero film. Toomes, played by Michael Keaton, understands himself to be the "little guy" forced to do what he can to survive. He becomes "the vulture" living off of not only the salvage of discarded technology but the rotting corpse of the American dream. The game is rigged, and he can only win by cheating. He is also someone who insists on strong control of his employees, to the point of disintegrating them, which perhaps is not that striking in a crime boss, but this is complemented an obsessive control over his family, including his daughter. SPOILER ALERT:  Keaton's scene with Holland in the car is one of the best exchanges between villain and hero in Marvel films, an a reminder that tension and drama do not need a Hovercarrier falling from the sky, but they also underscore a villain, who, to quote William Clare Roberts on facebook, is petit-bourgeois in everything he does--protecting his investments, his power over workplace and family at any cost. It is Corey Robin's The Reactionary Mind with a jetpack.

There are multiple ways to read this refiguration. One could see it as the culmination of the fascist aesthetic of superhero films in which us, ordinary people, are always victims or collateral damage. The Vulture shows us what happens when collateral damage becomes self aware. In many ways his origin story follows China Mieville's pitch for Scrap Iron Man. One could also read it as the allegory of the 2016 election, Coombes walks and talks like a member of the much bemoaned "white working class" albeit a little less racist. Combine that with the fact that he is pitted against a multi-ethnic combination of school kids as well as a New York that feels like New York, and you get a replay of the last election, "I am with Spidey."(Although not too multi-ethnic. Donald Glover is in the film almost to remind us that this is Peter Parker and not Miles Morales we are watching. We do, however get a version of Miles' friend Ganke in the film). Spider-Man too is a man of the people, or a teen, less a brooding loner than someone eager to find his place in the world. In this film his connect to the people is less the crowd of New Yorkers in previous films, but the help and support of his actual friend. On this last allegorical point at least things turn out alright, the everyman Vulture is defeated by the friendly neighborhood Spider-Man, and, more importantly, the latter refuses the corporate funding of the Avengers. So, Uncle Ben would have won, or whatever.


However, I am less interested in the allegorical dimensions, than in thinking about the superhero film as the form and content of a kind of cultural decline, and, how it can be detourned into forms of political critique or transformation. These days we all deal in scrap.

Posted by unemployed negativity at 11:46 PM