The Role of Revolution in the Transition from Man to Ape (and back again): On War For The Planet of the Apes 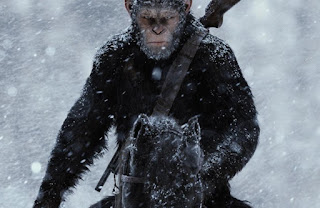 Perhaps the new ape films should be considered as one long remake of Conquest of the Planet of the Apes. Initially, this seemed to be limited to the first film, but the subsequent sequels have extended the revolutionary moment. Ape versus humans is no longer a chapter in the story, but the entire story. The first film, which seem like a risky one off when it was first released, had a few "easter eggs"alluding to a missing mission to Mars that set up the original films. With the film's success there was the need to continue the story, converting easter eggs to plot points, to provide the full story of the transformation of our world into a world of apes. This makes the recent ape films unique in the world of apocalypses and dystopias; the film does not present a new world already made, but the conditions of its making. That the final in what is now being called a trilogy comes out in 2017 on July 14th, hitting two revolutionary anniversaries, Bastille Day and the Russian Revolution of 1917, would only seem to underscore the point of revolution.They attempt to show how the planet of the apes came into being, revealing the causes and the contingency of what the original presented as necessity.
War for the Planet of Apes offers another moment of this transition. Although unlike Dawn which came before it there is no considerable leap forward of years, no slow transformation of a group of lab apes and zoo animals into a society. The opening credits reveal that this film takes place only a few months after the original at most. The apes still live in the woods someplace north of San Francisco, although much farther north, and are still being hunted by the soldiers summoned in the second film. The film is in some sense not about the revolution at all, and borrows from multiple genres to stitch together a story that puts a few more pieces in motion. It begins as a western, Caesar, the alpha chimp and central character, travels by horseback with a small posse to avenge a murder; culminates as a prison break film, as Caesar must liberate the apes from a prison camp; and ends a religious epic complete with a trip to the promised land and a Moses figure who does not quite make it there. These are all framed by the various call backs and reversals, now it is Apes who travel by horseback across a desolate beach rather than humans. These various bits of genre function a little like the scattered ruins and remnants of the post-apocalyptic wasteland. Ruin and genre come together in the naming of "Nova," who takes her name from a discarded bit of automobile chrome which is also a callback to the original film.

Perhaps one of the more interesting things about the film is how it deals with the divisions, not just between ape and human but the divisions internal to each camp. Dawn gave us two camps, human and ape, split between sympathetic and vengeful apes and humans. There was a kind of mirroring, some apes wanted to live in harmony with humans, some did not, and some humans wanted to live in harmony with apes, and others did not. The latter started the war, but Caesar must now deal with it. The small family of sympathetic humans are no longer present in this film, but that does not mean that the species are without divisions. As I mention, the apes find Nova, a young mute girl, and after killing her father adopt her. What is perhaps more interesting is the fact that there are apes, gorillas mostly, that work with the humans. They have sold out there species and their kind on the belief that they have joined the winning team, that the humans will spare them. Their betrayal is less an identification with humans than an individual calculation. They do not want to be human, they just want to be on the winning side.

The apes films have never been conceptually clear. The original pentalogy vacillated between treating the apes as different species and a different race, deploying a kind of anti-racist racism of a sorts. In the new films the vacillation is between revolution and evolution, between political struggle and the struggle for survival. This ambiguity is productive in that it is befitting an era bereft of ideals. The comprador apes, all gorillas for some reason, are post-ideological, just looking out for themselves, but, as is often the case, their post-ideological individual struggle for survival serves the dominant forces of power.

The original ape films were all about language, from Charlton Heston's "get your stinking paws off of me you damn dirty apes," to the (original) Caesar's "No" they were stories of the impact of enunciation. There are no major revelations of speech in War: instead there is the apocalypse of the lost of speech. It appears the simian flu makes some humans mute. This explains why Nova cannot speak, and in some sense puts in place another precondition of the original film.. From the first of the remakes onward the simian flu functions as a kind of deus ex machina papering over some of the difficult plot points of the original films. It wipes out most of humanity and renders the rest mute, doing most of the heavy lifting to get us to the premise of The Planet of the Apes. The mute humans also challenge the very definition of humanity, as The Colonel (Woody Harrelson) makes clear, humanity is threatened as much by its internal destruction, its loss of voice and with it reason and society, as it is by the external threat of the apes. His genocidal war is two pronged, he seeks to eradicate the apes and kill off the mute humans he sees as a contagion and a threat. It is no wonder that the films final scenes take place in a border camp, a site for maintaining and policing borders and distinctions. There is even talk of building a wall.

There is no definition of humanity that is not also a division within humanity. Any attempt to define the human, "speaking animal," "social animal," "rational animal," "toolmaking animal," even "featherless biped will necessarily exclude some humans. War illustrates this point. Nova initially joins the apes because she is an orphan and they cannot let her die. Her affinity becomes less elective, however, as a person without voice she is as much an outsider, as much threatened by the remaining humans as the apes. She joins the apes not out of choice, but necessity. Apes and mutes are included by exclusion, the outside of a biopolitical order. No such connection defines the other camp. The apes who have joined with the humans do so as second class humans, a kind of comprador humanity, spared so long as they obey orders. The humans refer to them as "donkeys," underscoring their status as muscle, as pack animals as well as being a reference to "Donkey Kong". The term "donkey" is only one of the neologisms we get in the film. The humans also refer to the apes as "Kong" even writing "The Only Good Kong is a Dead Kong" on their camp, making it the second film this year that is an ape movie/Vietnam allegory. As much as the very act of enunciation is important, drawing the line between human an non-human or ape and non-ape, defining lines of inclusion and exclusion, what is said is no less important. The words and terms of language police and maintain the lines of exclusion.

Spoiler Alert: The opportunist apes are more interesting than the film gives them credit, and the most interesting moment is when one finally turns against his captors, turns against humanity. This is perhaps the only moment that carries the mantle of revolution.

Ever since Charlton Heston screamed "You maniacs, you blew it up" part of the phantasy of the planet of the apes is the idea that our simian kin might do a better job with this planet, might make a better world. War reminds us that making a better world often involves putting aside self interest and forming connections that exceed the boundaries of our species. Perhaps it is time to reread Primate Visions.

Posted by unemployed negativity at 9:28 PM