Kampus Life: The University in the Age of Austerity and Neoliberalism 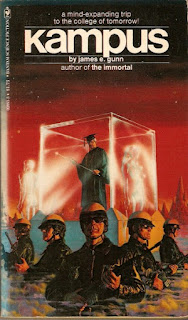 Once, years ago, I happened to read a science fiction novel called Kampus by James Gunn. I am not sure why, other than the fact that I used to read a lot of science fiction. I probably picked it up at a used bookstore, enticed by the cover.

The novel opens in the not too distant future in a thinly veiled University of California Berkeley. It is a Berkeley that has been transformed by years, perhaps decades, of student occupations and student demands. During the add/drop period the professors sell their classes to the students. Most of the classes are framed around some caricature of what one would imagine student desires would be, courses on growing pot, on tantric sexual techniques, etc. There is one exception, however, a philosophy professor who refuses to pitch and sell, instead engaging students in a socratic dialogue about the nature of the good life.


It is not the figure of a philosophy professor hopelessly behind the times, trying to convince students of the dialectic when the courses around him promise power, sex, and the chance to dissect human corpses, that has stuck in my head for years. It is a passage later in the novel. The main character, a student named Gavin is forced to leave the Kampus after kidnapping the president of the university, who turns out to be a robot. In the world of the novel, the president has been kidnapped and assassinated so many times that it was just cheaper to replace him with a robot, there is always a replacement handy. It is not the kidnapping of the president either that has stuck in my head, but a scene much later in the book, when Gavin is on the run. He ends up hiding out a technical school, a school offered to a different class of students, and with a different ethos. Gavin sees the career oriented classes, the constant presence of recruiters from IBM, Xerox, and other industries, and finally decides to teach everyone a lesson in campus radicalism.

Fellow students," [Gavin] shouted.
A clattering of silverware and metal trays stilled as students turned toward the platform.
"You are too smart to be taken in by a patter of slick talk by the business conspiracy," Gavin said. "That's no happy family they're talking about. That's a savage, cannibalistic world out there, and they want you to come and be the food. They don't want to give you anything. They want to take from you your lives, your free time, your free will, and your basic humanity. "They don't have anything to give you, because IBM belongs to you, General Electric belongs to you, Xerox belongs to you, the electric company and the nuclear-fusion company—all of them belong to you, because you are the people, and the people created them and built them. You own them, and you are entitled to all the wealth that pours from them, not just a pittance, what they spill from the horn of plenty."
He was moving them. He could sense their response, and the feedback made his voice stronger and his words more eloquent.
"This isn't a technical institute," he said. "This is a school for slaves. They're teaching you to be slaves to a society which doesn't even need slaves; they're forging your chains with promises, and binding them together with lies. They want you to trade your precious humanity for the role of a robot in this machine world. You're being brainwashed with pretty pictures of a wonderful world of consumption. Consume! Consume! Consume! That's all you mean to IBM. Someone has to devour the surpluses of the industrial machine."
They were on their feet now.
"Well, don't fall for their sucker game. Revolution is the only answer. Reform society! Take over the factories! Set them to turn out what people need, not what the factories want to sell. Don't let them parcel out your patrimony, give away in niggardly charity what the masses possess by right. The world was made for people, not for machines, and it should be run for people, by people, not for something called profits or production. Rise up and demand your rights!"
Some of them were shaking their fists at the ceiling. Soon they all would be ready to march with him. But—march where? And then, as he knew it would, inspiration came to him.
"Now, many of you are thinking: 'What can I do?'" Gavin said more quietly. "You're saying to yourself: 'I'm only one person. How can I fight a system, a whole society?' Well, I'm here to tell you that you're not alone. There's a whole world of brothers and sisters out there who want to join you, who are waiting to rise with you in the final revolution of humanity." They were roaring now. He had them. He had them. "But the time for that is not yet. We have to start where we are, and we are here at the technical institute. First we must reform this reactionary place. We will go to the administration. We will demand a revolutionary organization, a council of students to make whatever rules need to be made. We will run our lives through participatory democracy. "We will demand better food. We will demand freedom—freedom to dress as we please, to come and go as we please, to go to class when we please and if we please. We will demand human instructors to be hired and fired by the students. We will demand the banning of recruiters from the campus. Our demands will be nonnegotiable, and the first demand will be amnesty. Let's go! Let's take over the superintendent's office!"
He leaped from the platform and ran toward the nearby door. The students roared behind him. "Come on!" he shouted, waving an arm in the classic pose of the leader of troops, and they followed. Exultation rose in his throat like the sweetness of forbidden fruit; and power was like an aura around him, lifting his feet from the ground, propelling him forward. He heard footsteps running beside him. He turned his head, a word of brotherhood on his lips, until he saw that it was the superintendent. He was running well for a man who carried so much weight above the waist, but he had difficulty speaking, particularly with the crowd noise behind. "Think…better…turn…left," he gasped. "Evade…mob!"

It turns out that the students are not following him, eager to takeover the superintendent's office, but chasing him, eager to expel the radical from their midst. I think of this whenever I am confronted with students who are frustrated at the existence of philosophy, especially the unapologetically critical form of philosophy that I bring to the classroom, frustrated at anything that does not immediate get them out of school and into a job.

I am not sure what Gunn meant in writing his novel, or even how it ends. I think that it was meant as a fairly conservative critique of the excesses of student radicals, but that is not how I remember it. I remember the passage above, a passage that paints its own dark future of the university. It is not one of the excess of student desire, but of students so pressured by need, by the need to find a job, to pay off debts, that they do not have the time or inclination to even ask what they desire and why. I do not mean to sound cynical, and there are many, so many, who do not fit this mould. Every year I meet amazing students, amazing not just in their brilliance and their intelligence, but in their commitment to continue questioning and imagining. However, as I wrote earlier,  I think that it is useful to think of student debt, as a way to reconstruct the university from below, a below that is constructed from above, from the transformation of the funding of higher education. Not the below of the sixties, the demands for classes in African American history, women studies, and so on that transformed the university, and set off decades of cannon wars, but the below of austerity of a desperation to find work in a world of dwindling jobs, dwindling possibilities. We could also add why this demand for jobs has become the basis of a criticism of the university and not other institutions? Why has the university become the scapegoat of a society that offers less longterm employment and lower wages? And, of course, critique this very idea of work as an ideal, to open up the question of other possibilities, other social relations. However, the class where we ask such questions has been cancelled due to low enrollment.

Email ThisBlogThis!Share to TwitterShare to FacebookShare to Pinterest
Labels: Me, Science Fiction, University