In Space No One Can Hear You Struggle: On The Expanse 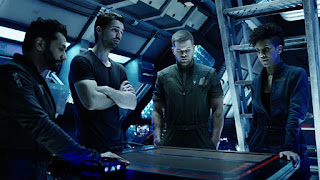 I am not sure if this going to be much more than a long exhortation to watch The Expanse.


As it has often been noted, Science fiction has been relatively absent from the so-called golden age of television, the kind of television that gets written about in blogs and websites. Sure, there have been shows such as Battlestar Galactica,  Black Mirror and, recently, Westworld, but most prestige   television has been dominated by a particular kind of melodrama set in either in the present or some nostalgic past. There is of course Game of Thrones, which has brought fantasy to television.

Both Game of Thrones and The Expanse are developed from a series of novels, that is the most obvious point of comparison. Beyond they have a similarity in narrative device, as multiple threads across different locations occasionally intersect in a larger conflict. This is underscored in the opening credits of the second season of The Expanse which even borrows the images of tiny models depicting the different locations of Earth, Mars, and the belt. Beyond this similar narrative structure there is a similar narrative thematic to both shows. As it has often been noted, Game of Thrones is framed between a kind of Machiavellian realpolitik, in which different individuals and families vie for the throne with murder and deception, and a manichaean opposition of light and dark, good and evil, in which all of humanity is pitted against the "white walkers." The latter is of course  more familiar to fantasy fans ever since Frodo traveled to Mordor.  Much of the supposed sophistication of Game of Thrones stems from the fact that it sprinkles its fantastic battle of light and dark with human conflicts. It is the television equivalent of the "salted caramel" flavor that has become so popular--salty nuance applied to children's candy.

If I was going to write more about Game of Thrones I would be tempted to write a dialectical critique that pointed out that its realism tends to become increasingly fantastic, as its plots about power struggles devolve into a kind of theater of cruelty, while its fantasy elements, zombies and dragons, point to the reality of a society oblivious to its own destruction. To put it bluntly, when your "realism" is dogs eating someone's face it has crossed the line into its own (darker) fantasy. Many critics have argued that the show's realpolitik realism is one in which rape and torture function as the ultimate evidence of reality. I suppose that this critique would only be remotely dialectical if I could point out that the other element, its fantasy is more realistic than the show claims, perhaps a portent of global warming or some other collapse that makes the politics of power struggle seem like a fantasy.

The Expanse is not without its Machiavellian and manichaean elements. Mars, Earth, and the various denizens of the cluster of space stations and mining colonies constantly struggle for power and domination. This is especially true of "the belt," the collection of mining colonies and space stations in the asteroid field between Mars and Jupiter and the locus of much of the show's action. The belt is divided between different factions all vying for control. The "Outer Planets Alliance" or OPA functions as the most militant, or from the perspective of Earth, radical dimension of this conflict. Earth and Mars are poised on the constant verge of a cold war turning hot, or as hot as things can get in the vacuum of space. This three way Machiavellian struggle begins to unearth a more manichaeanism opposition between the denizens of our solar system and some alien "protomolecule"--a weapon or form of life that could destroy or remake all of human life. (The name "protomolecule" comes from Protogen the corporation that initially begins experimenting with it. Its true name and function remains unclear.) The squabbles within the solar system take place against the backdrop of a larger alien threat.

Sticking with the letter M, it is possible to argue that The Expanse adds Marx, or at least a certain aspect of Marx to the Machiavellian/Manichaean mix. Many commentators have made this connection with "the belters" who are the exploited working class of space. This is no doubt true, and the show does a better job of continuing the theme of workers in space than the recent Alien film. What I think makes for a more interesting Marxist dimension is the way in which the show restores a particular strong reading of Marx's concept of the mode of production. The different planets and outer planets are distinguished in terms of not just their place in a power struggle, but in terms of their different material conditions. Earth is defined by a relative abundance of water and air, an abundance which is squandered and destroyed by a population that takes it for granted; Mars by a common project of terraforming, by collective discipline and purpose, and the belt by scarcity and exploitation, by a kind of precarity one can only experience if food and water are constantly at risk. As the UN Deputy Undersecretary of Executive Administration from Earth Chrisjen Avasarala clarifies in the following scene.


Now of course it is possible to map Earth, Mars, and the belt, along the (dated) schema of first, second, and third worlds. You have the two superpowers, with their different attitudes towards wealth, production and consumption, and you have the exploited smaller countries between them. What is most interesting about The Expanse is the way this solar-political difference forms the basis of not only different cultures, but a division of humanity. Earth, Mars, and the belt are different versions of humanity. Belters look different than Earthers and Martians, they are taller and thinner due to the lack of gravity, and are often covered with tattoos. Even those from Mars can barely tolerate the high gravity, bright sun, and open horizons of Earth.

The show then expands the mode of production in two ways. First, it incorporates nature, the conditions of production, into concept. Mars, Earth, and the belt differ not just in terms of how they produce and who they produce for, but also in terms of what they produce from. Earth is post-scarcity because the basic conditions of survival are given rather than produced, Marx is defined by a collective project to make a planet livable, a project and a telos, while the belt is defined by an absolutely hostile life against a harsh vacuum. It is a depiction of the mode of production fitting for the anthropocene in which nature and culture are thoroughly intertwined. However, it as much interested in anthropos as the environment.  The second change of the concept, or at least its pop figuration, is that the different productive conditions, or modes of production, have anthropological effects. As much as The Expanse has aliens of a more conventional variety, beings from outside the solar system, it is also a story of the becoming alien of humanity, of differences of production being somatized in differences of body. Of course, one could argue that this has always been the case, this anthropological division appears in Marx's earliest texts on alienation. As Marx writes,


Or to cite  a passage from Balibar that I returned to more than once on this blog:

"This process modifies the status of the human body (the human status of the body): it creates body-men, men whose body is a machine-body, that is fragmented and dominated, and used to perform one isolated function or gesture, being both destroyed in its integrity and fetishized, atrophied and hypertrophed in its 'useful' organs. Like all violence, this is inseparable from a resistance and also a sense of guilt...This is an unbearable process for the worker, but one which is no more 'acceptable," without ideological and phantasmic elaboration, for the worker's masters: the fact that there are body-men, mean that there are also men without bodies."

The two expansions, pardon the pun, of the mode of production, its incorporation into nature and its extension into the body suggest what is most necessary to reviving the concept today. The mode of production must make sense of a world in which nature can longer function as a simple outside, as raw material, but must be understood to be both a condition and effect of transformations of production, of the search for cheap nature and the metabolic rift that undermines the very reproduction of our life. It must also be brought to bear on a world which, to cite Balibar once again, in "which humankind becomes economically and, to some extent, culturally “united,” it is violently divided “biopolitically.” To which I would add, divided anthropologically, as the common notion of humanity is split into multiple divisions that seem to have less and less in common.