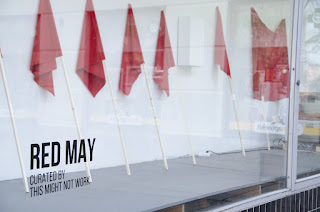 A bit of context: last weekend I was asked to participate in Red May Seattle, contributing to both its Marx-a-thon, a day long reading group on Capital and the Grundrisse, as well as discussing neoliberalism, science fiction, and the current struggles. What follows here is neither the text of what I presented on primitive accumulation, nor a kind of follow up self critique; it is an attempt to jot down some thoughts that were generated in collective discussion and reflection before they dissipate. It is red in practice and in theory, or, at the very least red in theoretical practice. What follows owes a great deal to all of those present at Red May. Names are withheld because I may have completely misunderstood what they were saying.

One way to understand primitive accumulation is it is theorized by Marx is as a kind of supplement. Contrary to the idea that the economy, that capital, functions on its own working as a self-reproducing process, it posits a necessary supplement to exploitation. How the economy functions on its own differs according to theoretical orientation and context. For Adam Smith it was a matter of mankind's tendency to "barter, truck, and exchange," but one could argue that such an image of the economy functioning on its own, reproducing itself, underlies even historical accounts of capital. In the first we are dealing with an anthropology, even an essentialism, while in the second we are dealing with economism. What the chapter on primitive accumulation (as well as the chapter on Colonization) reveal is that there is no capitalist economy without a capitalist state, no accumulation without dispossession. Part of the popularity of primitive accumulation is that it brings violence and cruelty  of the periphery into the core of the apparently clean and well regulated functioning of capital.

Such a reading, especially in its tendency to find primitive accumulation everywhere from the colonies to privatization to Uber's assault on the common possession of the automobile risks overlooking Marx's own understanding of capitalism. As much as capital emerges in the extra-economic violence of the state it cannot be reduced to it. To quote from my own The Micro-Politics of Capital:

"Marx is somewhat ambiguous with respect to the closure of primitive accumulation and its relation to the mode of production it engenders. At times, Marx appears to argue that primitive accumulation and the overt violence it involves ends in the day-to-day relations of exploitation; while at other times it appears that the violent lawmaking power of primitive accumulation is merely privatized and brought indoors into the factory. Marx emphatically illustrates the order of discipline imposed by the factory codes: “The overseer’s book of penalties replaces the slave-driver’s lash. All punishments naturally resolve themselves into fines and deductions from wages, and the law-giving talent of the factory Lycurgus so arranges matters that a violation of this laws is, if possible, more profitable to him than the keeping of them” (CI 550/447). Marx suggests that there is a qualitative difference between primitive accumulation and the capitalist economy it engenders, in terms of the former’s bloody discontinuity and the latter’s continuity and silent functioning. At the same time, however, Marx would suggest that this qualitative change is best understood perhaps as a change in the form of violence itself, capitalist accumulation is nothing other than primitive accumulation continued onto the shop floor, and thus nothing other than a continuation of the modification of violence begun with “bloody legislation” and the enclosure acts. The violence of law and the police gives way to the coercive force of the shop supervisor and the rhythm of machines."

It is perhaps Will Roberts who offers the most trenchant critique of all of those who insist on the ubiquity of primitive accumulation. As Robert's writes in Marx's Inferno, 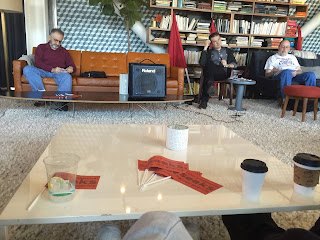 Following Roberts on the point that an overemphasis on the state and violence leads to an underemphasis on capital itself, on the domination internal to the reproduction of capital, it might be possible to argue for a different supplement. One of the most striking characteristics of Marx's chapter on primitive accumulation is that it stresses the story, the narrative and myth, at the heart of primitive accumulation. As Marx writes:


This primitive accumulation plays approximately the same role in political economy as original sin does in theology. Adam bit the apple, and thereupon sin fell on the human race. Its origin is supposed to be explained when it is told as an anecdote about the past. Long, long ago there were two sorts of people; one the diligent, intelligent, and above all frugal elite; the other lazy rascals, spending their substance, and more, in riotous living. The legend of theological original sin tells us certainly how man came to be condemned to eat his bread by the sweat of his brow; but the history of economic original sin reveals to us that there are people to whom this is by no means essential. Never mind! Thus it came to pass that the former sort accumulated wealth, and the latter sort finally had nothing to sell except their own skins.

To pull a Zizek and cite myself again:

"Thus, as much as so-called primitive accumulation posits a theory of the formation of the capitalist mode of production, albeit one predicated on a presupposed division between the diligent and the lazy, it turns this explanation toward the present in the form of a moral tale. The origin provides the present with a moral alibi, dividing the capitalist and the worker along the lines of the good and the bad."

Ok, finally, here is where I get to saying something new, or at least try to do so. Primitive accumulation is an account of the original constitution of the capitalist relation. As such it is a story of the destruction of the commons and the social relations that preceded capital. It explains how the very imperative to work is itself necessitated by the destruction of any other possible condition for reproduction. Or, as Marx writes, from this point forward it is possible to rely on the “worker’s drives for self-preservation and propagation” in order to reproduce capital. However, Marx's inclusion of primitive accumulation as a moral story suggests that such a brute assertion of economic necessity has never taken place, that capital always required a supplement, not, in this case, of state violence (although that is needed as well), but of ideological justification. From its origin capital has always needed stories about itself in order to justify its existence. The idea of capitalist as job creator, as origin of wealth, is just as important as the capitalist accumulation of wealth, and the idea of work as a moral activity, as defining one's worth, is just as important as work as an economic activity and source of value. There is no brute economic reality without its mythology.
These stories interpellate workers in ways that are historically specific as well as being specific to other relations. It is not just the fear of starvation that brings people to the factory gates but the desire to escape the patriarchal home, the peasant village, or other conditions, desires that are fueled as much by fantasies of wealth and escape as the material conditions of need. On this point I am very much indebted to everyone at Red May.

One could take this conclusion in multiple directions. Lately, I have followed Lordon and Citton in arguing that The Order and Connection of Ideology is the Same as the Order and Connection of Exploitation. Although in some sense such a point is posited against the methodological division of Lordon and Citton's different disciplinary emphases. One cannot separate structural conditions, the wage form, and myth, the stories and narratives of capitalist desire, because they are always already intermingled. Striving, desire, is always already determined by both the economic relations and their "mythic" representation. Second, to end on a point that is less infra-philosophical and more practical, one could then think about the way in which capital to this day continues to tell stories about itself, and how these stories function as a condition of its reproduction. Part of this seems to be intertwined with the problem of neoliberalism, which as much as it involved new spaces of market relations and a new conception of economic activity, it is also is the era in which capital becomes more thoroughly narrativized, or, to paraphrase Lordon, capital becomes not just our economy but also our culture.


Here is a highlight reel of Red May to play us out.
Red Videojoy from Red May Seattle on Vimeo.

Posted by unemployed negativity at 11:49 PM