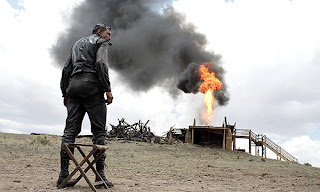 The last few entries on this blog have been notebook entries, the half formulated conceptual connections that used to belong in my little notebook (and should perhaps stay there). So as something of a change I thought that I would write about film.


I had a highly ambivalent reaction to There Will be Blood, an ambivalence that I could not pinpoint. This ambivalence was, and remains, primarily political, aimed at the political subtext of the film. Although I have to admit that this may have a lot to do with my expectations. I went into There Will be Blood half expecting to see Matewan except with oil; something about the scenes of the child preacher made me thing that this was the case. While I have come to appreciate the film, I still wonder about this particular omission of anything resembling class struggle. It is a film about capitalism, but without workers.

When Marx is writing about “primitive accumulation” he is writing about two things at once. The first is the account that capital gives of its own formation. This is essentially a moral story of thrift versus expenditure; the world is divided between those who save their money and become capitalists and those who spend theirs and are left with nothing but their labor power to sell. It is essentially a version of the old fable of the ant and the grasshopper. Marx, however, connects it to a different literary source. As Marx writes “This primitive accumulation plays approximately the same role in political economy as original sin does in theology.” This is what Marx refers to as “so-called primitive accumulation.” It is not only an ideological conception of capital, a moral justification, but a complete inability to think historically, falling to grasp how one ends up with workers and capitalists to begin with. Against this conception Marx provides an account of the formation of capital that is opposed to the first on every point: focusing on force rather than morality, and on the aleatory encounters of multiple relations, rather than the linear trajectory of an intention. This is the second thing, an account of force and violence in history. As Marx writes, summing up this process.

"The discovery of gold and silver in America, the extirpation, enslavement and entombment in mines of indigenous population of a that continent, the beginnings of the conquest and plunder of India, and the conversion of Africa into a preserve for the commercial hunting of blackskins, are all things which characterize the dawn of early capitalist production…These different moments are systematically combined together at the end of the seventeenth century in England; the combination embraces the colonies the national debt, the modern tax system, and the system of protection. These methods depend on brute force, for instance the colonial system. But they all employ the power of the state, the concentrated and organized force of society, to hasten, as in a hothouse, the process of transformation of the feudal mode of production into the capitalist mode, and to shorten the transition. Force is the midwife of every old society which is pregnant with a new one. It is itself an economic power."

When I first saw There Will be Blood it occurred to me to view it as a narrative of “so-called primitive accumulation,” a moral story. How else does one interpret the long scene of Daniel Plainview (Daniel Day-Lewis) working on his own silver mine? The first part of the film is very much the fantasy of the capitalist as the self-made man; which is why workers are oddly absent from the film. A great deal of writing on this film has labeled Plainview as the personification of capital. (The strongest argument for this interpretation can be found here). If this is so, then on first glance it is not necessarily a critical personification, since it holds onto one of the central ideas of capitalist ideology, the capitalist as one who has earned his wealth, the capitalist as “self-made man.” However, even this narrative is interrupted by the appearance of Paul Sunday, the goat farmer’s son who sells his family out of the desire for escape or perhaps spite. This contingent factor becomes the basis of Plainview’s later fortune, stressing that fortune is made up of frustration, desire, and spite as much as it is of thrift and work.

I am still at a bit of a loss as how to interpret the odd decision to cast the same actor (Paul Dano) as both Paul and Eli Sunday, as both opportunist in flight and would be moral core of the community. The explanation within the film is that they are brothers, ostensibly twins, but it leads to an odd confusion or doubling. All of which resonates in the final scene, when the brother that supposedly represents virtue and faith attempts to repeat the same gesture of opportunism and betrayal that the first brother did, only without success. One could thus argue that the casting, or the presentation of the brothers as twins, underscores the fact that the two narratives of primitive accumulation, morality and force, are never really separate, but intertwined.

This intertwining is given an added dimension by the presence of Plainview’s adopted son. In the long opening scene detailing Plainview’s initial accumulation of capital, he also acquires a bit of symbolic capital through the adoption of the son of a worker killed on the job. The son functions as Plainview’s morality externalized, his alibi as a “family man.” Capital does not so much follow from the moral actions of those who accumulate it, their thrift and hard work, rather it accumulates a moral image based on force. It can present the corporation as a “family business” only after it has destroyed the economic basis of the family. As Deleuze and Guattari stress in their brief remarks on “primitive accumulation,” primitive accumulation is not just violence but a violence that immediately cloaks itself in authority, by claiming a right to appropriate. To quote Deleuze and Guattari:

Finally, it occurred to me to look at the film beyond the two perspectives on primitive accumulation, capital born from thrift and work or blood and destruction. What the film stresses, in a way that is more reminiscent of Horheimer and Adorno than Marx, is not just the intertwining of morality and violence, but that capital is born out of violence done to the self. The opening scene of the film, the long drawn out scene of struggle with the earth itself, is not that of a man pulling himself up by his bootstraps as it were, but of a man destroying any connection with others, anything that we confusedly call humanity. What remains is the façade of morality, the adopted son and the image of the family man, and the ruthless desire to accumulate.

Posted by unemployed negativity at 4:51 AM

Hello. This post is likeable, and your blog is very interesting, congratulations :-). I will add in my blogroll =). If possible gives a last there on my blog, it is about the TV de LCD, I hope you enjoy. The address is http://tv-lcd.blogspot.com. A hug.

This feels like such a necessary conception of the capitalist... Alienated from themselves, driven by and towards 'sad passions' in a Spinozan sense, unable to enjoy feelings of solidarity or anything approaching joyful encounters with other people. So much of the critique of capital is from the viewpoint of a deprivation or subtraction from workers - it's nice to see an analysis that aims to show the shitty quality and limited nature of their lives too.