Beyond Good and Evil: Towards a Theory of the Buddy Movie 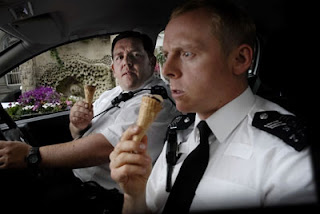 I am currently teaching a class on the introduction to political and social theory. One of themes that I have been focusing on as of late is the connection between various political theories and their underlying conception of human nature: from Aristotle’s “social animal,” to Hobbes “man is a wolf to man,” to Rousseau’s state of natural pity and self-sufficiency. My pedagogical point is fairly basic; I am trying to stress the importance of “political philosophy” that political questions of the state, law, and right cannot be dissociated from philosophical questions, in this case those of a philosophical anthropology. Even as an introductory pedagogical strategy it has its limits. First, students are all too quick to speak as if they know what human nature is, apparently it can be gleamed from some anecdotes from high school and a few seasons of Survivor. Second, and more importantly, it sets up a rather basic classificatory schema for understanding political philosophy, in which there are those who think that people are bad and those who think people are good. My point in setting this connection up, however, is to problematize it and go beyond it, a process that starts with teaching Rousseau and continues into Marx, Mills, and some anarchist writers (Goldman and Graeber).

In a short essay titled “Anthropology and Theory of Institutions” Paolo Virno reflects on this same connection between politics and anthropology. As Virno argues, this connection cuts both ways in that theories of human nature are also implicitly political. (Anyone who doubts this point needs only to read some of what gets called “evolutionary psychology.”) As Virno writes:

Let us avoid any misunderstandings: it would be unrealistic, even farcical, to believe that a model of the just society could be deducible from certain bio-anthropological invariants. Every political program is rooted in an unprecedented socio-historical context (religious civil wars in Hobbes’s case, a productive process directly based on the power of verbal thought in our own), confronting a unique constellation of passions and interests. Nevertheless, collective action is really contingent precisely because, while it seizes hold of the most volatile reality, it takes charge, in unpredictable and changing ways, of what is not contingent, which is to say of bio-anthropological invariants themselves. The reference to human nature does not dull, but rather accentuates to the highest degree, the particular and unrepeatable character of a political decision, the obligation to act in due time [tempo debito], the perception that yesterday was perhaps too early and tomorrow will be too late.

As much as Virno asserts the simultaneous unavoidable and unanswerable question of human nature he also seeks to separate the link that connects the “left” (communist, Anarchist, etc.) with some naïve belief in a fundamentally good human nature. (Anyone who has taught Marx knows how unavoidable this particular little ideological machine is; the fundamentally unavoidable nature of greed has become the strongest justification of capitalism.) As Virno writes: “Radicalism hostile to the state’ and to the capitalist mode of production, far from presupposing the innate meekness of our species, can find its genuine basis in the full recognition of the ‘problematic’ character of the human animal – which is to say its indefinite and potential (in other words, also dangerous) character.” Radical transformation of the existing order is not based on some supposed cooperative or collective character but on the indeterminacy of human existence, that are natural drives and desires only exist in their cultural articulation. This articulation can push these desires in multiple directions, for better or worse. For Virno the “social animal” that is at the basis of politics is neither good nor evil, but the unavoidable possibility of each.

Starting for a very different place Dominic Pettman makes a point that is somewhat related in Love and Other Technologies. Part of Pettman’s reflection begins with a fact so mundane it is rarely commented on, what could be called the conundrum of “serial monogamy.” That most people will fall in love multiple times, with multiple people, all of whom will seem to be “the one,” at least for the night. Pettman will use this fact to reflect on the generic and singular nature of human existence, eventually tending towards a thought of what Agamben termed “whatever being.”

No matter how much it insults our delicate sensibilities, the fact that remains that we are eminently replaceable on the macro or social plane…And that is why we must refuse to draw lines, distinctions, borders and conclusions prematurely. Precisely because everyone is a potential lover, he or she also is a potential victim of our hatred, and we foreclose on our own futures when we internalize an identity-as-essence or when we count off our conditions of belonging like rosaries or worry beads.

Love like hatred is always about a set of qualities, but it is never reducible to them. As much as we might have our types, the list of things that we look for or desire, their remains that irreducible “something” that is more than the sum total of items on a list. Moreover, there is often that point in any relationship when the very qualities that could have made up a list of desirable qualities become intolerable annoyances. Just as “good” and “evil” relate back to the undetermined potential, which is always capable of being determined in multiple ways, love and hatred relate to the indeterminacy and specificity of a person, their simultaneous generic interchangeability and specific singularity. What links these two arguments is that they attempt to think a politics from the perspective of what could only be called the “transindividual” (to use Simondon’s term), from the characteristics and relations that constitute the backdrop of individuals, rather than from already constitute human beings, or human natures.

So what does all of this have to do with the “Buddy film”? The Buddy film like the screwball romantic comedy begins with two people who completely detest each other and of course by the end that joined in homosocial friendship or heteronormative love. It is easy to interpret these films according to a version of Hegel’s master/slave dialectic, in which misrecognition turns to recognition. Following Virno and Perelman it is possible to read this scenario differently; it is not so much a matter of moving from what was falsely seen to what is truly there (the cad is a sensitive gentleman, the heiress has a heart of gold, the gruff older cop has a profound sense of justice), in which one set of qualities replaces another. Rather, it is a matter of grasping the inessential nature of all qualities, their existence as potentiality and not essences.

Most of the time our relations, our loves and friendships, are narcissistic, we love those who are like ourselves. We treat our neighbor like ourselves so long as they are like us to begin with. However, every once and awhile the vicissitudes of location, work, politics, family, or even desire bring us close to someone with whom we have nothing in common, and yet we build some kind of relation. We could see these as the expression of some kind of human nature, that supposed thing that we all possess, or we could see them as a critique of the nature of the individual as an essence, as the sum total of its qualities.

Posted by unemployed negativity at 11:18 PM