We Can Remake Him: Robocop Redux

It seems fair to begin this review with a confession as to why I love the original Robocop. It has as much to do with how I saw it as with its satirical take on corporations and American politics. I snuck in, or, more precisely, my father snuck my brother and I in. We were on vacation in Maine for the summer and one rainy day forced us to see a movie (Although I must confess the rainy day movies were as much a highlight of summer vacations growing up as hikes and rafting trips). We picked the godawful Jaws: The Revenge and just as we were walking out, the sounds of a shark that roared still ringing in our ears, my father turned to my brother and I, whispered "they owe us," and escorted us into another screen in the multiplex. This always struck me as appropriate: Robocop snuck its satire into a sci-fi action premise, and we snuck into see it.

When I learned that a remake was in the works, I was skeptical as to how it could not only reboot the subtext of the original, but how it could preserve a sneaky subversiveness that seems out of place with contemporary movie marketing. The remake is definitely more earnest, gone are the quick cuts to commercials and Leeza Gibbons as a news anchor. If there is a joke in the new film, Samuel Jackson (or at least his hair) is the only one in on it. Actually that is not entirely true, there is one good joke, which I will get to in a moment after explaining the shift of subtext.


The economic subtext of the new Robocop shifts from privatization, Omni Consumer Products takeover of the Detroit police force, to one of marketing and expanding market share. It appears that in the not too distant future drones, including a cameo by the first film's ED-209 (minus its lion's roar), police much of the world. As a general in the film states, the causalities from Vietnam, Iraq, and Afghanistan have lead to an increasingly automated military, occupation without the risk of casualties. These are actual robots, not remote controlled drones, and therein lies the conflict. A law prohibits the use of militarized robots on American soil. This law is called the "Dreyfus act" and its sponsor is Senator Hubert Dreyfus who is skeptical of a robot's ability to make the ethical judgements necessary to protect American lives. (there is that joke I was talking about). Robocop is then created to both circumvent the law, he is cyborg not a robot, and as a PR stunt to make robots more acceptable to the "robo-phobic" American public.

That the movie deals so much with marketing, even showing how different designs of the robocop's armor test with different focus groups, could be seen as a meta-statement on the film's own construction. When OCP CEO Raymond Sellars (Michael Keaton) suggest that they go with a "tactical black" for robocop's armor he is as much reflecting on the aesthetic of contemporary films as the aesthetic within the film. At the same time, however, this shift to marketing reflects a kind of disappearance of labor, despite the scene of an actual factory in China where the robocop and various robots are manufactured and tested. The scene of robocop breaking free of this factory, running past high tech workers dressed in surgical masks and scrubs, leaping over the compound walls and landing in a rice paddy is one of the most visually striking in the whole film--a product escaping the confines of its production--but it remains just that, visually striking, the worker's do not speak. Rows and rows of tech workers assembling microchips are just part of the background, as much of an image of China as the rice paddy itself. Labor is no longer the scene of conflict, as it was the first film's struggle between the privatization of the police force and the union; conflict is internal to the sphere of circulation, between the image a company seeks to project and its reality. Its politics are a consumer politics, where deviations between the image and reality will be met with angry consumers and voters. 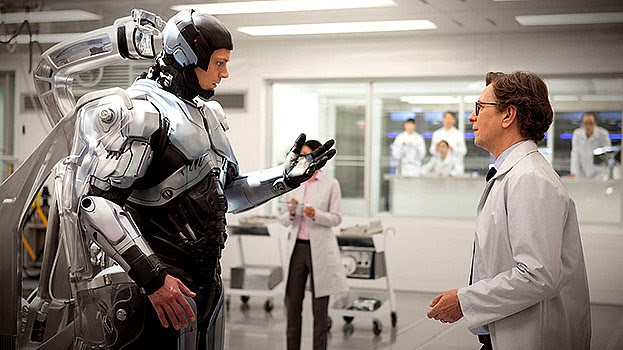 It is from this angle that we can approach the film's largest departure from the original. In the first film robocop is a machine that eventually discovers the man underneath, recovering his memory, and with the help of his partner, his identity.  In the remake this is reversed, robocop emerges from surgery aware that he is Detective Alex Murphy, horrified that an attempt on his life has left him little more than a head, a bit of a torso, and a hand. He is eventually made a machine, first by drugs which relieve the substantial anxiety he is dealing with as a man made into a machine. Then later, in the film's most interesting bit of scientific speculation, he is reprogrammed as a machine which thinks that it is free. This is because consciousness proves to be too slow, too riddled with indecision, to function effectively tactically. When put up against an actual robot, robocop fails to respond fast enough, or decisively enough. As Dr. Dennett Norton (Gary Oldman) says, "The human element will always be present! Compassion, fear, instinct, they will always interfere with the system!" The solution that Dr. Norton comes up with is to make robocop's combat functions automatic, a series of highly complex reflexes that kick in whenever he is threatened, but to program him to think that he chooses these actions. Robocop is a machine programmed to think that it is free. Aware of his desires and decisions, but unaware of the programming which has produced them, as Spinoza would say.

Robocop's ideological interpellation is matched in the film by the picture it paints of contemporary life. Robocop is entirely integrated within the circuits of the corporate surveillance state, able to tap into every security camera and cellphone call in pursuit of accused criminals. He is surveillance personified. What is perhaps interesting, and slightly amusing, is the surprise on the face of the individuals that it tracks down. They have forgotten that every call is monitored, every action filmed. They are too programmed to think that they are free, in that way they are just like us. They are posting articles about surveillance and facebook on facebook.

I wish that I could say that movie did something more with this idea, which touches on an interesting theory of ideology as well as debates within neuroscience, but it is not really expanded upon in an interesting way. In the end the man emerges, breaks free of his programming to become the hero. This is pretty much the lesson of the first film repeated. This lesson, as hokey as it may be, was believable in the first film because form matched content. The little bits of subversive humor, the excessive gore and violence, as well as the sardonic commercials in the original suggested something human breaking through the machine of the blockbuster. In the remake the machine wins, all enjoyment is preprogrammed from the beginning.

Posted by unemployed negativity at 10:42 AM

im guessing there's no tj lazer in the new robocop

No, instead the kid is a Detroit Redwings fan.