Divisions: Theorizations and Repudiations of the Division of Mental and Manual Labor 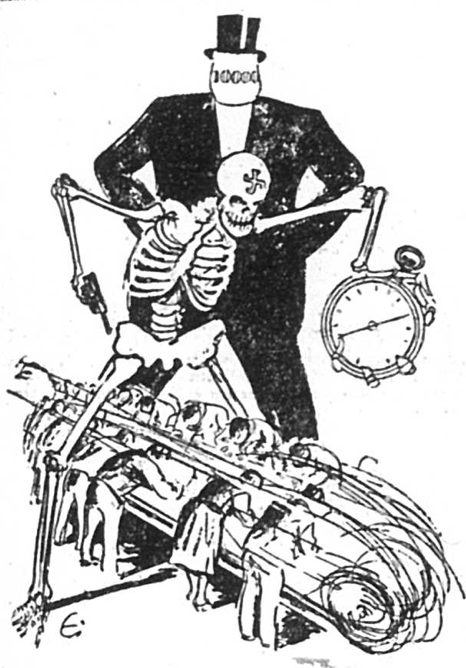 If there was a column listing the what is hot and what is not of contemporary Marxism (and why shouldn't there be?), then the division of mental and manual labor would definitely be in the "not" column. There are multiple reasons for this not the least of which is that the division, especially as it was developed into "the separation of execution from conception," was identified with the factories of Taylorism and Fordism. The separation of mental and manual labor was something that our age, an age of "immaterial labor" or "cognitive capitalism" was supposed to have surpassed.
Which is not to say that we are living in age past divisions and demarcations in labor. Even Lazzarato's famous text that outlines the idea of "immaterial labor" (a text that he has long since repudiated) outlines a difference between information and cultural production  As Lazzarato writes,

The concept of immaterial labor refers to two different aspects of labor. On the one hand, as regards the “informational content” of the commodity, it refers directly to the changes taking place in workers’ labor processes in big companies in the industrial and tertiary sectors, where the skills involved in direct labor are increasingly skills involving cybernetics and computer control (and horizontal and vertical communication). On the other hand, as regards the activity that produces the “cultural content” of the commodity, immaterial labor involves a series of activities that are not normally recognized as “work”—in other words, the kinds of activities involved in defining and fixing cultural and artistic standards, fashions, tastes, consumer norms, and more strategically, public opinion.

The differences posited at the outset, between information and culture, only multiplied as new types of labor, emotional, affective, care, and service, were added to this definition. The expansion of the concept took on the characteristics of a simple numerical addition, as new aspects were added to the list, unified only by their lack of a material object, a thing produced at the end of the day. Of course it was acknowledged that these different types of labor were organized hierarchically. Cultural production, or at least a certain type of cultural production that drove advertising and entertainment, was placed at the top, followed by the production of information and services. Affective labor, especially the care of the young, the elderly, and the infirm, is at the bottom of this hierarchy. It is the lowest paid. Any explanation of this hierarchy has to turn away from the question of technical skill, or away from economic factors entirely, towards the intersections of economy and society.

One of the central theoretical insights of the critique of housework developed by Mariarosa Dalla Costa, Selma James, and Silvia Federici is that labor is devalued to the extent that it is naturalized. If housework or care is seen as natural, as in the figure of the naturally caring mother or housewife, rather than seen as a skill, learned and mastered, then it is devalued. There is even room to suggest that this "naturalization" exceeds gender to include race, and even generation. A recent article in The New York times suggests that the younger generation are sought for jobs encompassing digital communication because constant use of social media is seen as a natural attribute of being young.  It is in this sense that something like "wages for facebook" makes sense, drawing attention to the naturalization of communication that is a precondition of its exploitation.

Here it would be useful to return to Marx and Engels The German Ideology, rescuing it from the gnawing criticism of the mice. It is in this text that Marx and Engels give central space to not just just the division of mental and manual labor, a division that ultimately explains the very condition of ideology, but to division in general. If alienation is the central motif of Marx's 1844 writings, and exploitation eventually takes central stage in Capital, then in The German Ideology, in 1845, the central concept was that of a division. The division between head and hand, town and country, even that between man and woman in sexual reproduction, are used not just to explain capital but to situate capitalism itself in a larger history of division and domination. The division of labor predates capital. As Marx writes, (in something of a Nietzschean aside), "Division of labor only becomes truly such from the moment when a division of material and mental labor appears. (The first form of ideologists, priests, is concurrent.)" The division of mental and manual labor is a division that capitalism does not create, but inherits, adding to it the divisions between conception and execution in the workplace, and the divisions between classes outside of it.

From this perspective the question is not how has "immaterial labor" annulled and transformed the old divisions, but how has it extended and complicated them. Lazzarato's later work offers one possible theorization of this division. As Lazzarato argues, reading Tarde, there is a distinction between the joys of invention and the sadness of repetition and imitation. This distinction is transversal to any division between mental and manual labor. The repetition that defines the life of a call center worker, making the same call, uttering the same phrases, is closer to the experience of a Fordist or fast food worker than it is to an advertising executive or day care worker. Conversely, a craftsman or even a skilled repairman, like Mark Crawford's example of a someone repairing vintage motorcycles is closer to the ideal of immaterial labor, not just in terms of thought but in terms of responding to novel situations. The divide between repetition and invention trumps the division between mental and manual labor.

Yves Citton's work on interpretation also seeks to reconceptualize the divisions internal to the so-called information economy. Citton offers a three part division between information, the standardized and formalized knowledge that constitutes data; invention, the valorized acts of creation that attract the attention of entrepreneurs; and interpretation, which more or less pass between the two. It is the latter which is the focus of Citton's interest. Interpretation in this sense is the degree zero level of creativity that extracts new understandings from the same experiences and relations. Citton argues that interpretation is in some sense naturalized and devalued, passing between the standardization of information and the fetish of invention.

These last remarks from Lazzarato and Citton are offered here as something of a suggestion; a suggestion to return to the division in the division in mental and manual labor, recognizing both that this division cuts across mental and manual labor, and intersects with other divisions, such as gender, race, and nation. (As Balibar's work illustrates, the question of the division of mental and manual labor is inseparable from the question of a "anthropological difference," of the various divisions of humanity). This intersection is framed by the poles of naturalization, in which particular labors are devalorized by appearing to be "natural" to this or that group of workers, defining them and their labor,  the most salient example of this is care work which is seen as natural to women,and overvaluation, in which a particular type of activity, that of entrepreneurs or the "creative class" is overvalued and given undue importance--becoming entangled with the fetish of capital.. These poles are related, the overvaluation of the activity of some is always expense at the naturalization of others.

The divisions between workers must be overcome, but in order for that to happen they must be recognized first.
Posted by unemployed negativity at 11:38 PM

Great post on this "cold" topic. Though he distances himself from the Marxist legacy, it seems to me that the division of labor--however posed--is central to Ranciere's arguments about both politics and aesthetics. Thanks.

Yes, I agree especially in terms of The Philosopher and His Poor. It is something that I would need to explore further, thanks.