Fear of the State/the State of Fear

A few weeks ago I happened to catch Bill O’Reilly on The Daily Show. The topic of the interview was the “politics of fear” that the Fox Network has propagated since Barak Obama’s election. I am not sure if I got the words right, but when asked why he was afraid of an Obama presidency, O’Reilly said something to the effect of, “I do not know how he is going to govern.” Now O’Reilly was being disingenuous with this, almost as disingenuous as his claim that he is an anarchist and wants power to the people, but what if we took him seriously?

Why? Well because I think that there is something to looking at the present through this perspective of how one is governed or, in Foucault’s terms, governmentality. First of all it underscores the fact that we have been governed in a particular manner for at least the last eight years. Speaking broadly I would say that this governmentality has combined an inchoate fear of the “terrorist” with a neoliberal model of interest. The fear stems from 9/11 and has been mobilized repeatedly whenever there has been a need to curtail rights. The “neoliberal” interest has roots that extend much farther back: it is our basic idea of government as a service that we purchase with our taxes. Neoliberal interest does not just demand that the government cost less in a monetary sense, taking less of our tax dollars, but that it cost less in terms of our time and attention as well. As Lawrence Grossberg once wrote, “the government which distracts the least, governs best.” Neoliberal interest understands freedom to be something that is primarily realized in the market, in shopping. These two modes of governmentality overlap, sometimes spectacularly so, as in George W. Bush’s call to “Unite, consume and fly” after 9/11. They also overlap the more mundane way that neoliberalism’s massive disinvestment in the public, as a realm of freedom and action, paves the way for the complete and utter destruction of the rights of the public.

Based on this rather cursory analysis one cans see the recipe for the republican’s recent collapse: When the market itself becomes an object of fear the combination of neoliberal interest and fear comes unraveled. Bush’s speech in favor of the $700 billion bail-out was in many ways modeled after post-9/11 politics of fear: the same claim of a terrifying exigency that trumps discussion, debate, and politics, but this time it fell flat. The last few weeks of the McCain campaign, in which there was an attempt to resuscitate at any costs the politics of fear, bringing back ‘60s radicals and the red scare, were based on a fundamental misunderstanding of the affective composition of the electorate. It is not that fear was lacking, it is just that its object had changed: the economy which was supposed to be an outlet of what remains of freedom had become an object of fear.

(As something of an aside, I reminded of Spinoza’s remarks about the internal limitations of a politics of fear and superstition in the Tractatus Theologico-Politicus. As Spinoza argues nothing is more unstable than a state founded on fear and ignorance. “The multitude has no ruler more powerful than superstition,” but superstition itself cannot be ruled.)

Based on this analysis it does seem to me that there is a real question as to how Obama will govern. The reason that this is such a question is that I think that it is pretty clear that the democrats lack their own specific form of governmentality (to borrow and twist Foucault’s point about Marxism). The democrats by and large have simply adopted the terms of neoliberal governmentality and their supplementary politics of fear: claiming to be both fiscally more responsible and more intelligent in terms of the “war on terror.” While Obama’s politics by and large follows this trend, disappointingly claiming to return to the “war on terror” to its true front line in Afghanistan, he has made a few rhetorical gestures outside of it: namely, his critique of the “ownership society” as an “on your own society,” his attempt to invoke some idea of (nonmilitary) sacrifice, not to mention his reference of “spreading the wealth. What remains to be seen is if these will constitute another idea of governmentality; that is, if there is something beyond the empty signifier of “change.”

Ultimately I am less concerned with Obama’s specific governmentality than what an Obama presidency means for those to the left of the democrats: in other words, the left. To return briefly to Foucault’s remarks on governmentality, which provides the barest of conceptual skeletons for this rant, in Security, Territory, Population he suggests that governmentalities emerge and change through the various counter-conducts that challenge them. The real question then is how are “we” going to protest and provoke the Obama presidency? What counter-conducts are possible. This question is important for two reasons. The first is the frightening collapse of critical thought in the face of the admittedly inspiring and historical event of the Obama presidency. The second is that eight years of the Bush presidency has led to its own exhaustion of critical thought: everything Bush did was so wrong, morally, politically, tactically, etc., it just got to be so easy to say no to the whole thing. Rage and anger eventually gave way to irony: politics collapsed into discussing the latest gaffe.

As Mike Davis suggests, it is perhaps time to construct the equivalent of tent cities.

Posted by unemployed negativity at 10:17 PM No comments: 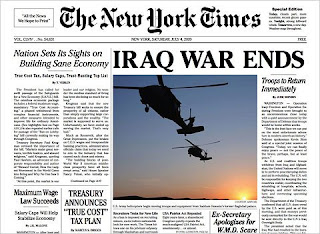 There has been a great deal of humor, satire, parody, imitation, etc., produced about the current presidential campaign (The Daily Show, The Colbert Report, the return of Saturday Night Live, etc.), so much so that the jokes and imitations serve as indicator as much as polls and analysis. One could say a great deal about this sort of meta-irony, in which parody comes prior to event. However, that is not my point here, I was watching this parody of the final debate today, and the following occurred to me.

Not only is its absurdist take on the whole "Joe the Plumber" thing amusing, it captures something true as well. For me the key scene is when McCain forces Obama to apologize to his imaginary friend Joe. This is in many ways the political situation in this country. The Republican Party, or the right in general defines the fantasy, the war on terror, the middle class, etc., and the Democrats are judged by how well they address the fantasy.

This is especially true of "Joe the Plumber," a man who very much wants his fantasy preserved. He claims that he wants to own his own business, but as subsequent news reports revealed, he was in no position to become the wealthy independent business he desire to be. His real complaint to Obama, and the real objection to "spreading the wealth" is that it robs him of the fantasy.

I do not want to sound too much like an unholy combination of Zizek and Lakoff here, although I am afraid it is a little late for that, but it seems to me that nothing will really change in this country as long as the right defines the fantasy.

Posted by unemployed negativity at 7:07 PM No comments: