What Deleuze and Guattari Get Wrong (About Capitalism). 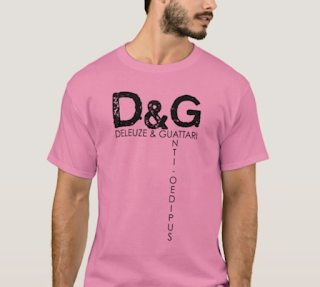 
As I have said elsewhere, I consider the theory of capitalism put forward in Capitalism and Schizophrenia (especially Anti-Oedipus) to be a response of sorts to the definition of capital as ceaseless modernization that Marx places at the center of The Communist Manifesto.
Whereas Marx and Engels put forward a theory of relentless modernization in which all that is holy is profaned and all that is solid melts into air, Deleuze and Guattari posit that this modernization, or deterritorialization necessarily has a corresponding reterritorialization. What capital decodes and deterritorializes  on one hand is revived on the other, but on a different scale and in a different context. As Deleuze and Guattari write,

What Deleuze and Guattari proposes is less a relentless revolutionary modernization than a modernization that creates the conditions for its own revivals of the past, its own anachronisms (with a current function).  What Deleuze and Guattari are trying to describe is less a world where all that is holy is profaned than a world in which all of the religions and cultures of the past are constantly revived, resuscitated as commodities and private beliefs. The old codes norms and beliefs return, but they do so in a fundamentally transformed and private form. I think that I mentioned somewhere else on this blog that such a dynamic initially struck me as descriptively true and was part of the reason that I got interested in Deleuze and Guattari in the first place. The offered a theory of a world where relentless commodification of everything was constantly countered with a reaction that sought to find and restore meanings and values. They were writing about the sixties in France, but to me it sounded like a description of the US throughout the eighties and nineties.

However, Deleuze and Guattari understand these reterritorializations to be primarily private, no longer the public beliefs of  the masses that defined the original codes. Oedipus is no longer a despot but a family affair. Moreover, they are separate from not only public belief, but from the economy altogether. The economy, capital, has nothing to do with codes. It functions through axioms.


For Deleuze and Guattari capitalism does not have a particular code or social organization as its historical presupposition. Its only presupposition, as Marx demonstrated, is the encounter between, on the one hand, a multitude of individuals who have only their labour power to sell, and on the other, a flow of money free to purchase labour power. In each case the constitution of these two flows of bodies and money presupposes the breakdown of codes. A breakdown of the codes that anchored labour to any community, tradition, or hierarchies of knowledge (as in the guilds or feudalism), as well as a breakdown of anything that links money to specific places and uses, to a restricted economy of prestige. ‘Hence capitalism differentiates itself from any other socius or full body, inasmuch as capital itself figures as a directly economic instance, and falls back on production without interposing extra-economic factors that would be inscribed in the form of a code’ Labour and wealth have become deterritorialized; have become stripped of any code that would tie them to any determinate relation to the past and any meaning. Rather than coding the various practices and desires constitutive of the society, capitalism functions by setting up quantitative relation between the two deterritorialized flows, labour and capital, establishing as axiomatic an equivalence between a particular amount of labour time and a particular amount of money. Axioms are distinct from codes in that they do not require belief in order to function. Axioms relate to no other scene or sphere, such as religion, politics, or law, which would provide their ground or justification. Axioms simply are, they lay down a particular formula, a particular system of equivalences, and this cannot be argued with—it is only possible to add new axioms to the system. In order for capitalism to function one does not need to believe in anything, even in it, one only needs to act in accordance with the quantitative flows, selling one’s labour etc. To be a bit dialectical as much as Deleuze and Guattari negate the Manifesto with the notion of reterritorialization, of revivals of the sacred, they preserve it with the distinction between codes and axioms, which posits capital as relentless modernization.

This seems to be what Deleuze and Guattari get wrong, or what no longer fits capitalism today. The idea that labor and money are purely quantitative, external, devoid of belief and subjectivity seems harder to maintain if it ever was the case. The contemporary era can be defined as a reterritorialization that does not so much revive beliefs and desires outside of the economy, reviving religion, nation, and culture as so many private interests, but a reterritorialization of the economy itself. To use Deleuze and Guattari's terms, the economy itself has become overcoded as working status and wealth become not just economic factors, not just axioms of quantities,  but moral terms as well. Capitalism has created its own code, its own morality. Work is not just an axiom setting up a relation between time and money, a job and a wage, but an entire code defining and delimiting worthwhile people and interests. Money is not just an abstract quantity, but an entire symbolism unto itself with its corresponding authority. On this point Lordon can be understood as an attempt to update Deleuze and Guattari for a different economy of affects.

For the polemic (and the title) I have overstated the case a bit, bending the stick in order to straighten it. I have not considered the way in which the situation of axioms changes in A Thousand Plateaus where the emphasis is less on the opposition to codes and more on the relation to major/minor. There are three reasons for my simplistic presentation. First, Deleuze and Guattari are not alone in theorizing capital as something that exists indifferent to passions and desires, as icy waters of calculation that construct an iron cage (to mix metaphors and references). Such an assertion is almost a commonplace in contemporary theory. Second, Deleuze and Guattari's assertion that "desire is part of the infrastructure" works against the spirit if not the letter of such a theory, positing a social order that can only exist only reproduce itself if it is actively desired rather than indifferently tolerated. Last, and most importantly, the theorizing that Deleuze and Guattari offer, what could be characterized briefly as a theory of the economy of affects, offers at least some basis for beginning to understand the perverse world we live in in which the rise and fall of the stock market is almost a libidinally charged event and unemployment is as much a psychic trauma as an economic condition.

A Turkish translation of this blogpost has been published here.
Posted by unemployed negativity at 10:40 AM

Email ThisBlogThis!Share to TwitterShare to FacebookShare to Pinterest
Labels: Deleuze and Guattari, Marx

Thanks for the informative post! This helps clarify one tension that I was interested in D&G's work, in Virno's work as well as your article on Cynicism and Piety. I’ve also been thinking of this particular passage from ATP in particular, it's a little out of context since they're talking about Kleist but it was very reminiscent of Virno:

“Similarly, feelings become uprooted from the interiority of a "subject," to be projected violently outward into a milieu of pure exteriority that lends them an incredible velocity, a catapulting force: love or hate, they are no longer feelings but affects. And these affects are so many instances of the becoming-woman, the becoming-animal of the warrior (the bear, she-dogs). Affects transpierce the body like arrows, they are weapons of war. The deterritorialization velocity of affect.”

It’s as if in both volumes social relations are untethered from despotic formations and uprooted from the interiority of subjects. But whereas under AO this merely renders them axiomatic, in ATP it also makes possible a politics of affect. This makes much more sense when people seem to drive pleasure from not only seeing stock markets rise, but from optimisation, from “smartness,” from automation and efficiency. Anyhow, thanks again for the post!

This is totally on point. I argued in a paper that, inspired by your insight of the persistence of recodings along with the creation of axioms. Just as overcodings once limited the power of codes, making them productive, in the same way that form limits matter (norms as positive models limited by laws, essentially negative). But this has been replaced by a new social hylomorphism: that of axioms which limit recodings. Rather than laws that limit and legitimate norms, axioms of price, wages, and class limit and justify the recodings and reterritorialization that they must also produce. Capitalism needs to revive old codes to keep up aggregate demand and thus production. It's the recodings that keep us productive: axioms are only fixed limits.