"The Only Thing That We Have In Common Is The Illusion of Being Together"*: Connecting with Don Jon 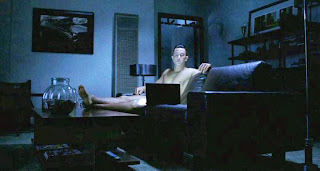 The entire relationship between Jon and Scarlett Johansson's character often comes off as the relationship between the most stereotypical media representations of both genres. It is like watching a relationship between an issue of Maxim and Cosmopolitan. As Lacan said, "there is no such thing as a sexual relationship," but he forgot to add that there are sexual advice columns. There are a few points, however, where the film moves beyond almost being a cliché about clichés. For example a scene of Jon's family eating dinner and discussing relationships as a highly sexualized Carl's Jr advertisement comes on the huge television screen, distracting both Jon and his father, does a nice job of subtly drawing out the objectification of women that is the backdrop of our daily life.

It seems to me that the film is not especially interested in gender, or sexual relations, either, but about a kind of mediated narcissism. In this view porn is just one more thing to be consumed in quantitative units. The women he picks up at the bars are rated on a scale of one to ten by his friends, Jon settles for nothing less than an eight. The sins of sex are forgiven by the required amount of "Hail Marys"and sustained by the required repetitions at the gym. This point is developed further in interviews with the Gordon-Levitt, the film's writer/director. As Gordon Levitt states,

"Everything in Jon's life is sort of a one-way street. He is not connecting or engaging with anyone. That goes for the women in his life, that goes for his family, his friends, his church, even his own body. It's an item on a checklist. He doesn't listen; he just takes. At the beginning of the movie, he is finding that dissatisfying because there's the sequence where he brings a young lady home from the bar and he is comparing her to this checklist that he has got of what he likes to see in a pornography video. Obviously, a real human being is not going to map onto that because there is a fundamental difference between a human being and an image on a screen."

From this perspective the absence of a relation is based less on the gender coded norms of sex and romance, but two people who view the other as filling out the parameters of a manufactured image. Moreover, Gordon-Levitt's statement almost exactly mirrors Bifoi's distinction between connection and conjunction. As Bifo writes in Precarious Rhapsody,

"Conjunction is the encounter and fusion of rounded irregular forms that infiltrate in an imprecise, unrepeatable, imperfect, continuous way. Connection is the punctual and repeatable interaction of algorithmic functions of straight lines and points that can be perfectly superimposed onto each other, inserting and detaching themselves according to discrete modalities of interaction...The digitalization of communication processes produces a sort of desensitization to the curve, to continuous processes of slow becoming and a corresponding sensitization to code, sudden changes of state and the succession of discrete signs."

Bifo and Gordon-Levitt see the contemporary situation as prioritizing connection over conjunction. In order for people to meet, for bodies to combine, they must first be airbrushed, sanitized, and sculpted according to established schemas and norms. No wonder Jon prefers the digital copy to a real person that has only strived to copy such a copy. The film does not present pornography as a compensation, as a failure to deal with the norms and ideals of dating--something for losers--but their realization. Only someone who picks up women he rates from one to ten, women that are never more than a face, breasts, and butt, can truly appreciate the reduction of women to the same.

Framing Don Jon through the breakdown of social relations, rather than as statement on gender relations, has the benefit of sidestepping some of its sexual politics. It is less problematic to think of the film's third act ideal of sex as connection, as losing oneself in another, if that can be seen as part of of a larger point about the loss of "conjunction" (in Bifo's sense). (Not to mention the fact that the film has as much trouble as Don Jon does understanding, or even imagining, what women might desire). Moreover, doing so pushes it beyond a kind of "digital dualism." Connection is not just something that happens online, but it already happens in the bar when bodies and faces are ranked and assessed. Or in a confessional when the sins of the flesh become a requisite number of prayers. Conjunction is something that must be struggled for. Although it should be noted that movies rarely represent that struggle, passing this problem off to love at first sight or magic pixie dream girls (or in this case an older variant). Movies generally present connection as conjunction, promising the realization of a relation in what is only its cliché, it is Don Jon's merit to attempt to confront this limit.

Posted by unemployed negativity at 11:21 PM

Wow I'm just getting around to reading this and it is exceptional.Here's mine on Don Jon http://moviesandfilm.blogspot.com/2013/10/reviewdon-jonreading-through.html