The Community of Those Who Cannot be Affected: On Lordon's La Société Des Affects 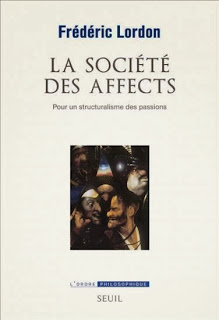 Frédéric Lordon's La Société des Affects: Pour un Structuralism des Passions is comprised of a series of essays which develop and expand upon his "energetic structuralism," his synthesis of regulation theory, Marx, and Spinoza developed in such works as Capitalisme, Désir, et Servitude: Marx et Spinoza.  It is also a book that continues Lordon's interest in the intersection of philosophy and the social sciences, specifically Spinoza and political economy.

The book offers two important expansions of his earlier critique of capitalism. First, it revisits the rather rough historical schema that Lordon outlined in his book on Marx in Spinoza. In that book Lordon divided capitalism into three periods based on how the conatus, the striving to persevere in one's being. The first stage, that of formal subsumption, is defined by one simple impetus, one must work to survive. The lack of commons, of alternatives to commodity production, leaves the reproduction of the capitalist relation primarily to what Marx refers to as the “worker’s drives for self-preservation and propagation.” The drive to work is dominated by the sad affect of fear, the fear of starving. The second stage of capitalist structuring of desire is broadly categorized under the name of Fordism. Fordism shifts the impetus to work from survival to consumption, while at the same time dividing and fragmenting work. The worker’s activity is fragmented, made part of a whole that exceeds it, becoming as much passivity as activity. The sadness of work, its exhaustion, is compensated for with the joys of consumption. The contemporary articulation of work and desire, what could be called neoliberalism, is defined by a re-identification with work, not the work of mastery or even the stability of Fordism, work is identified with insofar as it is unstable and precarious. This is the subjectivity of the entrepreneur, of the neoliberal entrepreneur, the neoliberal entrepreneur of the self, which actively embraces uncertainty as opportunity. It is the maxim alignment of subjectivity and structure, the striving of capital with the desire of the individual.

In La Société des Affects, Lordon does not so much challenge this basic schema, it remains just that--a rough schema, but he returns to Spinoza's Ethics to augment it. In the closing of Part Three of the Ethics Spinoza completes his schematic account of the affects with a nominalism of objects and individuals. Spinoza argues that there as as many different loves and hates ‘as there are species of objects by which we are affected’ (EIIIP56) and ‘each affect of each individual differs from the affect of another as much as the essence of one from the essence of the other’ (EIIIP57). Objects and individuals differ according to their specific histories and relations. This is not a pure nominalism, a plurality in which everything "depends on the situation," however. Lordon argues that when it comes to the relation of capital, the particular modality of hope and fear, love and desire, is a localization of the general structure. There is some flexibility in the labor relation, a boss might encourage more input or demonstrate more concern, but that does not alter its basic component relations. The loss of control over the activity, the compensation through the wage, are defining conditions of any labor relation. Nonetheless, these differences of the specific articulation, these images of the "good boss" of the happy workplace work to forestall any systemic criticism. To cite C. Wright Mills (from the epigraph of Kathi Week's The Problem with Work):

"One type of work, or one particular job, is contrasted with another type, experienced or imagined, within the present world of work; judgments are rarely made about the world of work as presently organized as against some other way of organizing it."

Variations within a general affective composition of labor prevent any systemic critique.

The second addition to this book, as I have mentioned, is a reconsideration of the social sciences. Once again Lordon offers a rough history. As Lordon argues the rise of structuralism in the social sciences was followed by a return to agency and individuality. Lordon's "structuralism of passions" based on Spinoza's conatus circumvents this, it is a theory of "agency without subjectivity." Striving, the conatus, is not some point of irreducible individuality, but the point where the social relations are individuated. Lordon takes as Spinoza's central critique of liberal individuality the idea that people in general "are conscious of their actions, but ignorant of the causes by which they are determined" (EIIP35S). This general formula of subjectivity applies not just to actions but to thoughts as well. We think ourselves free because we are ignorant of the ways in which we are determined, what else explains the sheer redundancy and banality of those who supposedly "think for themselves." (Trust me on this point, I teach philosophy at a University). True liberation, of thought or action, cannot just be asserted but must be actively produced through action which is necessarily collective and material. It is not enough to declare that one "thinks for themselves," but the liberation from those thoughts one silently thinks must be produced. To quote Foucault's definition of his project on this point, ''The object was to learn to what extent the effort to think one's own history can free thought from what it silently thinks, and so enable it to think differently.'' 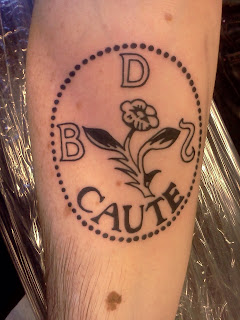 Tattoo by Gemma of Made-RiteTattoo

In closing I would like to drive these two points together, the plurality of affective locations and the persistent fiction of the free individual. It seems to me that part of what sustains the fiction of the free individual is a persistent attention to the exception, to the variant to the norm. Any discussion of systemic and structural determination, whether it be through ideology or actions, the order and connection of thoughts and actions, is often met with the citation of an exception. A discussion of the systemic nature of capitalist oppression is met with a Horatio Alger's story of an individual getting rich; a similar response occurs in discussions of racism, sexism, etc., all of which are met with invocations of their exception, or, worse yet, their "reversal." Years ago I was teaching a mandatory "Race, Class, and Gender" at a small state university. One student in that class submitted a "paper" which was really just a list of names, all exceptions that were meant to disprove the existence of anything like systemic racism, misogyny, and heteronormativity. Oprah disproved racism, Ellen homophobia, and so on. A pantheon of celebrities was invoked as certainty in the just nature of the world. There is an intimate relation of this imaginary populated with exceptions and the belief in freedom.

The connection between these two things, the focus on the exception and the belief in the freedom, is an affective one. As Spinoza writes, "Both insofar as the mind has clear and distinct ideas, and insofar as it has confused ideas, it strives, for an indefinite duration, to persevere in its being and is conscious of the striving that it has" (EIIIP9). It is painful and difficult to give up the fiction of a society of free and autonomous individuals, to confront our finitude and determination by a world that exceeds our capacity to thrive, (and is not particularly concerned with our thriving.) The desire to see ourselves as free necessarily constructs an immense imaginary populated by other free individuals--it is an "inverted world" made up only of exceptions. The imaginary and belief of the individual necessarily sustain each other. This is why it is not enough to simply critique such liberal imaginaries intellectually, such a project is not only based on the faulty idea that thoughts can affect bodies, but, more importantly, that one would willingly desire sadness, willingly consider one's own impotence to act. A truly liberatory critique must connect the critique of the image of individual freedom with the production of new conditions of freedom, the sadness of the loss of man as a "kingdom within a kingdom" must be countered with new joys of transindividual liberation.

Posted by unemployed negativity at 9:22 PM

Email ThisBlogThis!Share to TwitterShare to FacebookShare to Pinterest
Labels: Lordon, Marx, Me, Spinoza

Unknown said...
This comment has been removed by a blog administrator.
3:10 PM