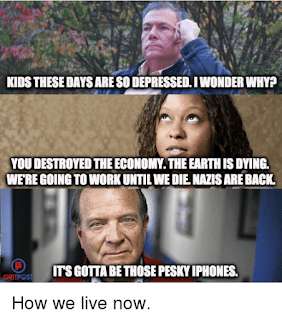 I started reading Malcolm Harris' Kids These Days: Human Capital and the Making of  Millennials in probably the ideal location and context. I was visiting my mother at a retirement community in Florida for Christmas. I was reading it by the pool when I actually overheard someone go on about "kids today" and their phones and video games. The general worry about the current generation was all around me.
Harris central argument, his central polemic, is to counter all these narratives of generational moral and spiritual decline with a materialist analysis of economic causes and socio-cultural effects for them. Kids these days are caught in a pincher of sorts. On the one hand due to automation and outsourcing there are less jobs, less "good jobs" available; while on the other hand more and more of life has become observable, measurable, and recorded. These two trends converge in such a way to erase the indeterminate liminal space that used to define being a "kid" from childhood through the early twenties As a member of "generation x" I remember that a favorite threat of teachers and principals all throughout school was that something would go on my permanent record,a Foucauldian document that would follow me ghost like from elementary school to my first real job application. Such a thing did not exist, but the threat has become realized by everything from social media to zero tolerance policies in schools. Records have become more permanent at the exact moment that mistakes are less and less tolerated.

Harris' book begins with childhood. As Harris writes of education, "America can no longer afford to recognize children's work than it can afford for them not to do it" (a point that could be extended to all social reproduction--from housework to care for elderly relatives.) As Harris argues children have been forced into more and more homework, schools and even day care have become competitive, and play dates have become scheduled to maximize social and human capital. College is not just something one prepares for in the final years of High School, suddenly joining a club to pad one's application or taking latin to prepare for the SAT, but is an ongoing project. From this Harris' chapters turn to work, social media, and even the moral panics of sexting and pornography consumption. At each step of the way he subverts the standard narrative of moral failings, of a generation so far from the greatest, reframing this narrative as one of responses to economic pressure. Perhaps the most interesting part of his argument concerns the absence of spaces for kids and adolescents, which forces kids to either hang out in public or quasi-public spaces, where they are subject to security and police harassment, or online where every joke or emoji is likely to produce a moral panic. Every generation becomes the subject of a narrative of moral decline and failure, it is just that with millennials so much of what they do can be seen or screenshot. Millennials, like the rest of us, can see more data about themselves than ever before, which leads to all the think pieces, and the perpetual confusion where it is hard to tell if something is truly new or just newly visible. 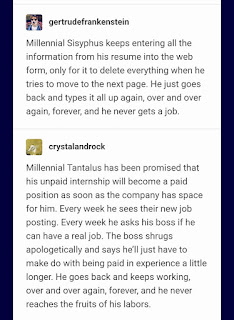 Harris whips together an immense tapestry of statistics and anecdotes, painting a rather desperate picture of a generation defined by austerity and secular stagnation. This picture is not intended to be a narrative but it looks like one; a story that begins with childhood, with investments in the human capital, and ends with youtube stars and NCAA athletes trying to maximize their own human capital. Something happens in this trajectory that is barely remarked upon by Harris, effects become causes, children who are scheduled into playdates with appropriate peers by their parents become young adults who "can do optimized hooks and brand strategy [managing instagram accounts and twitter feed] better than adult professionals can." Harris is more interested in the whole picture than this moment of transition, of subjectification, the point at which kids become passive investment strategies in someone else's portfolio (to be Gary Becker about it) and become their own agents, investor, worker, and capital all in one. That Harris is not interested in this question makes sense given his polemic and the necessity of painting a different picture of the millennial than the dominant one, but given his interest in resisting this transformation, of creating a different world than one where individuals anxiously jockey for less and less of a dwindling pie, it would seem to be worth asking how such a world becomes internalized, becomes common sense and lived experience. For that more than a snapshot and a polemic is necessary. An economic analysis would have to ultimately shift from generations, which  is, as Harris points out a pseudo-concept more suited for think pieces than thought, to class. Everything that Harris talks about in this book has different class effects--the uneven and combined effect of human capital. Or, as Marc Bousquet wrote, "Youth is the category through which class is lived."
Posted by unemployed negativity at 4:00 PM