Becoming Saul: Reflections on the Last Season of Better Call Saul (Part One) 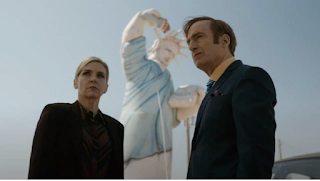 The prequel is defined by a particular kind of paradox. As much as it aspires to reach the point from which original story, connecting with the present that it is the past of, the more that the point recedes, and become unreachable. Or, more to the point it overreaches its mark. This is especially true of the some of the worst versions of this, the movie Solo forgets that the name Han Solo is cooler if we never hear its hackneyed origin, that having a wookie as friend and sidekick is more interesting if we never see the first time they meet, and that the Kessel Run sounds cool but that does not mean we need to see it. A character can be defined more by the way the enter the screen in media res than by fleshing out their backstory. More becomes less and the more you add the less it alls seems to matter.

Better Call Saul has struggled with this in a different way. The more we learn about Saul/Jimmy's backstory the less he can be the person we first meet in Breaking Bad. This is in part because he is introduced first as a character that is defined by his lack of depth and character. Learning his back story can only add depth and tragedy to a character who revels in his cheap superficiality. Even if we get to the point where he becomes a man who will offhandedly suggest that Walt and Jesse murder Jesse's friend Badger to keep him from talking to the DEA what we know would make that person a different person and make it a different decision. The hollowness and emptiness of such cruelty and indifference becomes different if we know its causes, if we know what brought Saul to such a situation.

Better Caul Saul has dealt with this problem of the prequel by shifting focus. As much as the show gives us the history of Saul's garish suits, the story of how Mike goes from corrupt cop to drug enforcer, and more about a secret drug lab under a laundry than we ever wanted to know, it also gives us characters like Kim Wexler, Ignacio "Nacho" Varga, and Howard Hamlin. These characters exist only in the prequel and thus all we really know about them is that they do not appear later on, why they are absent and how that comes to be is much more indeterminate ending, much less of a restriction, than knowing what a character becomes. The question driving much of the final season is not so much how does Jimmy become Saul, but what happens to Nacho and Kim.

The first half of the final season deals with two plans. The first is repercussion of Mike and Gus' plan to have Nacho set up Lalo Salamanca to be killed. This plan did not succeed and much of the first half of the season deals with the repercussion of that failure, for Nacho, for Gus, and most importantly for Lalo. This plan leaves Nacho and Lalo in fundamentally opposed situations. Nacho has no resources, no one he can turn to, and a great deal of liability, must notably to his father; Lalo has a great deal of resources, including a man with the same dental records he can utilize to fake his death, and almost no liabilities. In the case of the former, Nacho's liability proves to be his undoing, he is forced to sacrifice himself in order to save his father. In contrast Lalo proves himself to be one of television's best depictions of the sociopath, someone for whom there is no difference between having a drink with a mourning widow or torturing someone in a woodshed if both can get him the information he wants.

The second plan is Kim and Jimmy's scheme introduced at the end of the last season to undermine Howard in order to bring the Sandpiper Crossing class action suit to a quick and prosperous end. This plot takes the form a classic cinematic con in that the con we see is only the cover for a deeper con. It is possible to argue that the heist film and con film are diametrically opposed. While the heist film often stages the difference between plan and execution as something unanticipated undermines the original plan  (that is its materialist dimension), the con film stages the difference between the plan we see unfold and the plan we do not see. In this sense it is more idealist than materialist in that it suggests the ability of an individual, or duo in this case, to incorporate all reactions and contingencies into a grand and secret plan. In the heist something goes wrong, a cop shows up at the wrong time or, to use an example from Breaking Bad, a kid with a dirt bike shows up just as you are robbing a train, but in the con even the glitches have been anticipated, they are the ruse of reason in which the larger plan is realized. In the heist we see often see the plan first in its idealized perfection only to then learn how it can go awry; in the con we never see the long con, the big plan, until the end. We are left to piece it together from the clues that we see. In this case we see Kim and Jimmy go through a great deal of effort to undermine Howard's standing in the community, planting drugs, starting rumors about him, and even stealing his car with its signature NAMASTE plate to make it appear he is soliciting and abusing prostitutes. These schemes are all meant to provoke Howard to hire a private detective to follow Jimmy to collect a dirt on him, a private detective who, unbeknownst to Howard, is actually working for Jimmy and Kim as a double agent. This is the plan within the plan: to use the private detective to get Howard to see some faked photographs. It is not Howard's reputation that they are working on, but his understandable anger towards Jimmy, and ultimately his sense of respect for the legal profession. Howard's retaliation has already been anticipated and is part of the larger plan which forces him to breakdown in the midst of the mediation of the Sandpiper Case.

Jimmy and Kim's plan works, they have anticipated Howard's reaction, but what they have not anticipated is how their plan intersects with Lalo's. Watching Better Call Saul sometimes feels like watching two different shows, one about scheming lawyers and the other about the world of drug cartels; the midseason finale uses this to its advantage. When Lalo and Howard end up in the same room at the end of the midseason finale they are two characters from different shows and different worlds. Howard cannot possibly see who Lalo is, dismissing him as just a client of Jimmy, and it proves his undoing.

The first half of the season ends with Lalo about to hatch his plan against Gus, a plan that suddenly involves Jimmy, the cockroach survivor, and we do not know what he will see and anticipate or fail to see in executing it, but I wonder if the first half of the season has already set up the second, if the real question is who has liabilities and attachments and who has resources. The tequila stopper in the flash forward that opens the season suggests that Jimmy/Saul still has attachments that will prove liabilities. Perhaps we have yet to see the actions that will bring Jimmy to the emptiness of Saul. 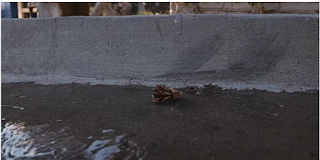 Posted by unemployed negativity at 1:46 PM