Still Anomalous After All These Years: Negri’s Latest Book on Spinoza 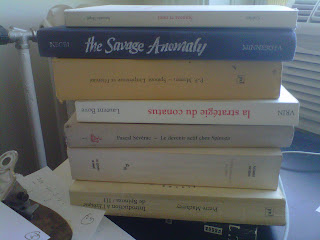 Perhaps one of the most striking aspects of the French and Italian turn to Spinoza over the past forty years is the sheer volume of the texts produced. A volume in terms of the massive tomes, such as Matheron, Moreau, and Macherey’s studies, but also in terms of the repeated returns to Spinoza’s thought, returns that attest to what Macherey referred to as its infinite productive nature, its capacity to produce new readings, new effects. Negri’s latest book on Spinoza, Spinoza et nous (Translated into French by Judith Revel, although I could not find a corresponding Italian text) is his third book on Spinoza.
Negri’s little book, a series of essays on Spinoza covering democracy, Spinoza and Heidegger, and a sociology of the affects, is presented as both a defense of his particular interpretation of Spinoza, which began with The Savage Anomaly, and of what is stake in the general turn to Spinoza. With respect to the latter, Negri argues that the return to Spinoza should be given the conspicuous date of 1968. This is its date in intellectual history, following the publication of Matheron and Deleuze’s studies, but it also places it within the post-68 crisis of Marxism and transformation of capital. As Negri argues, the crisis of Marxism opened the turn to Spinoza.
What is perhaps more interesting is how Negri defines and defends his particular project. He does not mention the famous, or infamous, thesis regarding the dual foundations of the Ethics, the split between a more or less neo-platonist philosophy of emanation in Parts One and Two and an immanent constitutive ontology in Part Three onwards. Rather, the focus is now on potentia as the construction of the common. Or as Negri puts it, in a concise formulation, “Chez Spinoza, les forces productives produisent les rapports de production.”(“With Spinoza, the forces of production produce the relations of production.”)
This formulation takes us back, well way back to the dialectic of forces and relations with their corresponding fetters, but also to The Savage Anomaly.  In that book Negri argued that all instances of potestas, of sovereign power, must ultimately be seen as instances of potential, of immanent power. More specifically, following Spinoza’s Tractatus Theologico-Politicus, the image of God as lawgiver must be seen as a product of human imagination and human desires. Negri’s return and reformulation of that crucial aspect of his earlier work affirms what remains its central aspect: the relation of politics and metaphysics in which Spinoza’s metaphysics is his politics and politics has an unavoidable metaphysical aspect. As Negri writes, “Politics is the metaphysics of the imagination, the metaphysics of the human constitution of reality, the world.” Negri’s reading of Spinoza expands what is meant by forces beyond labor power to encompass desire, affects, and reason, all of which make the world, including the relations that constrain and restrict them. Now the assertion becomes the basis for a polemic for all those who would reduce Spinoza’s thought to a history of democracy (Isreal) or even a genesis of institutions (Balibar). Against any attempt to posit a symmetry of potentia and potestas, forces and relations, to make relations (law, institutions) the necessary mediation of forces, Negri asserts the primacy of forces, or potentia.
This is the original thesis of The Savage Anomaly and Negri defends it against its multiple detractors. The first chapter, “Spinoza et nous” is organized much along the same lines as the first chapter of the book on constituent power (Insurgencies in English): in each case a radical central thesis is defined as it is defended against all attempts to curtail or contain it.  However, this defense is bolstered and transformed by two concepts which have appeared in Negri’s books with Michael Hardt: biopolitics and the common. The first of these concepts moves Spinoza’s thought beyond the interplay of politics and metaphysics, in which one defines the other, to a terrain of a production of subjectivity. The common is what produces and is produced by this subjectivity. In defining the latter Negri draws extensively from Part V of the Ethics, constructing a trajectory in which an irreducible striving (conatus) constitutes a multitude. In each case the imported terms help define the singularity of Spinoza’s thought in which desire and imagination construct the multitude.
The final essay in the book, “Spinoza: un sociologie des affects” (which was presented and published as part of Spinoza et les sciences sociales edited by Yves Citton and Frédéric Lordon) represents the most promising aspect of contemporary “Marxist-Spinozism,” for lack of a better word, and that is the affects as way for understanding sociality. Negri points out how Spinozist social science necessarily calls into question the very division constitutive of the social sciences, the separation of value neutral “sciences” from politics and the institutions of society from nature. Spinoza contests each of these, in the first case by offering a genealogy of value, of the different constitutions of desire, while, in the second, there is no division between nature and institution, the organization of bodies and the organization of minds. Finally, Negri insists, as he does throughout this little book, that Spinoza must be understood as a transindividual thinker. (This last point, and the reference to Simondon, is something of an interesting surprise, although I admit that it threatens to throw something else that I am writing off a bit)
In general Spinoza et nous follows the trajectory of Negri’s engagement with Spinoza, Spinoza becomes a singular and anomalous figure only in and through the engagements with Marx, Heidegger, Hegel, Machiavelli and Foucault. It is a work of the transindividuation of Spinoza.
Posted by unemployed negativity at 10:18 AM

Thanks for the review. I've seen this around town, but not picked it up. I'm interested in the reference to the transindividual. Do you think it's a reference to Simondon's writings? Or to the Aspe/Combes/Virno readings of Simondon? Having been working through Simondon for the last little while, I'm surprised to see such a reference especially given the critical treatment given to Simondon's ideas in Commonwealth.

Yes, I was surprised too. Simondon is referenced by name on page 135, it is only within a list of thinkers on technics. Generally, it seems to me that Negri's critique of Simondon is tied up with his critique of Virno. In each case (I am referring to Commonwealth and In Praise of the Common) he argues that the common remains transcendental and naturalistic. I tried to briefly address this in my review of In Praise of the Common, but will have to look into it more.