Teachers are the New Welfare Queens 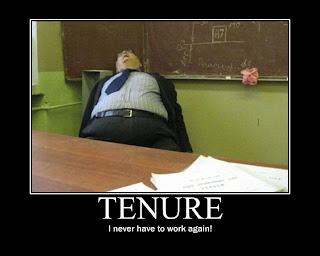 I am sure that you have seen the bumper stickers before. They say things like “Keep Working Millions on Welfare Depend on You” and, more recently, “Spread My Work Ethic, Not My Wealth.” They reflect a cornerstone of conservative ideology, the distinction between those hard working real Americans and the lazy people on welfare.
One could say a few things about these distilled little kernels of ideology. First, it is just that, ideology, not an accurate depiction of reality, but has become less accurate in the years following "welfare reform." However, that these bumper stickers linger on, and get reprinted after Clinton’s “end welfare as we know it,” and the emergence of workfare, suggests a pure fantasy sustained more by resentment and frustration than anything else. Second, as ideology, it testifies to Ronald Reagan’s ability as an ideologist, while stories of welfare fraud preexisted him, he made the “welfare queen” a central figure in the conservative imaginary. Third, and most importantly for my interests here, all these bumper sticker slogans and images depend on a distinction between those who work and those who do not, something that will be of interest to Marxists. After all exploitation, which can be very basically understood as distinction between those who work and those who benefit, is fundamental to the Marxist critique of capitalism (or any mode of production, actually).

Several Marxist philosophers, notably Etienne Balibar, Fredric Jameson, and Slavoj Zizek, have all remarked that Marx’s basic formulation, “The ideas of the ruling class are in every epoch the ruling ideas: i.e., the class which is the ruling material force of society is at the same time its ruling intellectual force,” needs to be augmented. These ideas would not become ruling ideas, would not take hold, if they did not in some way reflect and refract the basic experience of the dominated working class. We could call this a version of Machiavelli’s thesis that a ruler must appear to be “of the people,” to share the concerns, values, and ideals of those who he or she rules over. The combination of these two theses, the ruling class and the dominated class, explains the faux populism that dominates American politics, the forced folksy sayings and the endless parade of candidates we would supposedly “like to have a beer with.”

In this case the experience of the working class is the basic fact of exploitation, the sense that someone somewhere is benefiting from all this work. Ideology is an inversion of this, a camera obscura in a different sense. The history of politics in the years post Reagan, and just as likely before, has been a history of different figures playing the role of “welfare queen.” In the nineties it became the illegal immigrant, crossing the border to benefit from non-existent social services. Now, as this article suggests, it is the public employee, most specifically the teacher, playing this role.

This can only be considered a step backwards: no longer are workers pitted against imagined non-workers but against other workers. (Although I cannot really say this, not much is worse than the ideological assault on illegal immigrants: a hyper-exploited labor force, often contributing to taxes and social security the they benefit from, portrayed as a parasite) It uses the insecurity and poverty of some workers, those without benefits and retirement accounts, to argue against any security, any protection, in a frenzied race to the bottom. Moreover, the folksy “We’re broke,” which is uttered by governors and senators to justify such cuts, is an attempt to take the everyday experience of poverty and uses it to efface the conditions of such poverty, tax cuts and benefits for the rich.

Recognizing that the fundamental kernel of all these attacks is the simultaneous acknowledgement and obfuscation of the fact of exploitation does have its upside, however, it makes it possible to turn this anger and frustration to other targets, to financial capital and then to capital itself. If exploitation is at the basis of all these attacks on "welfare queens," "illegal immigrants," and, now, "teachers," then it should be possible to use that as a political opening, to begin  to address exploitation that actually exists, the real divisions of wealth and poverty rather than the imagine ones. The bumper sticker I want: “Keep Working Thousands With Trust Funds Depend On You.”  Or something to that effect, I am not good at bumper stickers.
Posted by unemployed negativity at 10:14 AM