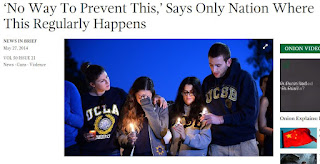 The events are both all too familiar, all too common, a mass shooting at some university, school, or public place, but at the same time they are each singular, a different person, a different town. (War might be the way history teaches Americans geography, but mass shootings are the domestic version. Columbine, Sandy Hook, and Aurora, these are towns that are known for the horrors that have happened there). Always the seemingly interminable wait for the ethnicity and motives to be revealed. It takes only hours, but it is interminable because it determines the political fallout, will it be called terrorism, or will it fade into the generic terror of day to day life in America. The singularity of the events, of the different motives or malady determining the actions, would seem to preclude any general theory. Yet, the very fact that they have become so familiar, defining a particular phenomena of modern life, demands theorization.

This is precisely the challenge that Franco "Bifo" Berardi takes up in his book Heroes: Mass Murder and Suicide.  Berardi’s account is rather exhaustive—he reads the testimonies left by such individuals as Eric Harris and Dylan Klebold of Columbine, Seung-Hui Cho of Virginia Polytechnic, and Anders Behring Breivik of Oslo and so on. The list always seems to go on. Through this survey Berardi isolates some basic trends, trends which make it possible to draw a sketch, an outline that says as much about us as it does about the singular cases.

First, there is the increasing awareness on the part of all these individuals that their actions can will be seen. They stage not only their killings for the news, but often supplement them with pictures, with press packets showing them brandishing guns etc. They understand their action solely in and through their mediation. These are atrocities of the society of the spectacle--suicide by selfie.

Second, there is the underlying world view of these actions, their specific "philosophy". This philosophy can be summed up by the T-Shirt that Harris wore that day in Columbine. On it were printed the words "Natural Selection."  As Berardi writes,

“Like the large majority of the generation that has grown up in the neoliberal decades, the young Eric Harris is totally persuaded that the strong have the right to win to predate. It is the natural philosophy that he has absorbed in the social environment in which he was educated…but the young man knows very well that he was not going to be a winner in the social game. Instead, he decides that he will be winner for a moment: I’ll kill and I’ll win; then I’ll die.”

A psychiatrist examining Cho’s statements and video stated, “these videos do not help us understand Cho. They distort him. He was meek. He was quiet. This is a PR tape of him trying to turn himself into a Quentin Tarantino Character." For Berardi Cho’s pathology is to be found precisely in this vacillation between absolute victim and absolute winner. This is more than Cho's pathology, however, it is our spontaneous philosophy. The absolute binary of winners and losers, a combination of fantasies of victory and defeat, is nothing other than affective core of contemporary ideology. Winning has migrated from competition in sports and even business to become a general ideal. An ideal that becomes all the more appealing in the face of uncertainty and precarity. Consider for a moment Trump (or, better yet, don't) his success is in part predicated on his ability to speak this language, to understand that "losers" will do anything to feel like "winners" again. At this point it is necessary to go beyond Berardi's analysis to underscore the gendered nature of these actions, that they are all men, and mostly white men. They anger and ressentiment often comes from a strong space of entitlement, from a sense that very thing that were owed to them are not coming.

However, Berardi’s psycho-pathology of the present makes it difficult to sort out the social and the pathological. What separates these general trends of culture and society from their pathological expression? The very division between the individual and the collective, of the lone wolves and terrorists, is itself the site of a particular politics, or at least ideologies.

Here it might be useful to turn briefly to another philosopher who has commented on this phenomena, albeit only through a singular (and French) case. Bernard Stiegler argues that Richard Durn a mass shooter in France, reflects a generalized failure to individuate. His desperate claim to "want to feel powerful and free just once," is a desperate plea to exist at all. For Stiegler Durn is unable to say "I" or "We," to constitute the minimum consistency of individuation, or see his own identity as having anything to do with others. There is only a hostile "they." As Stiegler writes,

"To say we live in an individualistic society is a patent lie, an extraordinary false delusion, and, moreover, extraordinary because no one seem conscious of it, as if the efficacy of the lie was proportional to its enormity, and as if the lie was nobody’s responsibility. We live in a herd-society, as comprehended and anticipated by Nietzsche. Some think this society individualistic because, at the very highest levels of public and private responsibility, but also in the smallest details of those processes of adoption stamped by marketing and the organization of consumption, egotism has been elevated to the pinnacle of life. But individualism has no relation to this egotism. Individualism wants the flourishing of the individual, the being always and indissociably a we and I, an I in a we or a we composed of Is., incarnated by Is. To oppose the individual and the collective is to transform individuation into social atomization, producing a herd."

I do not subscribe to Stiegler's rather apocalyptic sense of disindividuation, something I touch on here, and have more to say about here, but I think that it is correct to see these actions as a general problem of individuation. They are at one and the same time generic reproduction of a series, copycats of copycats, but absolutely isolated and alone, unable to experience the degree zero sociality of any connection whatsoever. The terrorist versus lone wolf distinction seems horribly misplaced, and not just because it is often irredeemably racist, but because it hinges on such arbitrary distinctions as someone's browser history. Being an individual, even a mentally one, is a privilege which is unevenly distributed across race and gender. Some always act alone and others, no matter their isolation, will always be part of a collective. A religion, ethnic background, or single tweet can make anyone the representative of a "clash of civilizations." Or, alternately, one can always find a singular pathology, a broken person, behind the political manifestoes and threats. Everything is at once collective and individual, but who gets to be seen as an individual tragedy or a collective condition is all in the construction of the narrative and its founding ideologies and myths.

Moreover,  search for "organization" and "coordination" of these seemingly isolated acts overlooks the way in which they are always already coordinated by the general cultural and political conditions of our society. We cannot slide deeper and deeper into an all out war at the level of the nation and not expect individuals to get the memo. Here is the paradox which will have to serve as a conclusion, none of these killers are lone wolves, their actions, their spectacle and their mythology, is only a particular warp and distortion of the general fabric of contemporary society, but they are all so very alone, alienated by their very interpellation in an ideology of competition. "Lone Wolves" are the culmination of the general asocial socialization, the atomization and competition of contemporary society--the only thing they have in common is the illusion of being independent.
Posted by unemployed negativity at 12:10 PM

Thank you for this. I wonder if your concluding remarks don't lead us to the more unsettling conclusion that the actions of the lone-wolf, grasped as interpretations of the social fabric, demonstrate no warp or distortion at all, but rather are quite coherent spontaneous philosophical possibilities immanent to the mish-mash of abstract humanitarianism and insurrectionist neo-liberalism?

Today's New York Time's op-ed would seem to be case in point:

"Opponents of gun control are saying, as they do after every killing, that no law can unfailingly forestall a specific criminal. That is true. They are talking, many with sincerity, about the constitutional challenges to effective gun regulation. Those challenges exist. They point out that determined killers obtained weapons illegally in places like France, England and Norway that have strict gun laws. Yes, they did.

But at least those countries are trying. The United States is not. Worse, politicians abet would-be killers by creating gun markets for them, and voters allow those politicians to keep their jobs."

The reality is hopelessly complicated, but the problem has a simple solution. An elaborate and incoherent state apparatus, which tolerates (if not outright needs) political corruption and special interests, installs gridlock on gun reform but in the abstract we live in a democracy so the voters are to blame.

Which leads me back to the question of distortion: Is the glaring bad faith position of the social fabric calling for violent insurrection against itself?