The Stories We Tell: Event and Mythocracy 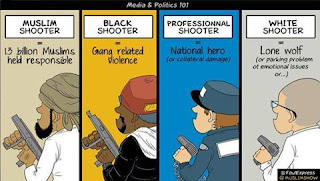 Let me begin with an observation that is perhaps obvious and an analysis that is a bit pedestrian (even more so than usual). The current political moment, what could be called the #blacklivesmatter moment in the US, is punctuated by particular events, the killing of black men by white police officers or other individuals: Trayvon Martin, Michael Brown, Eric Garner, Tamir Rice., etc.. Immediately after the event there is a struggle, waged in the media and in conversations, to make sense of and situate the event.

These narratives become the site of contestation. Sometimes these contests become very overt. The latest, and most blatant, has been the attempt on the part of Fox News and others to make the shooting in Charleston about an "attack on faith"--a claim that becomes more and more ridiculous as more evidence about the shooter amasses. Other narratives depend on code words that range from the overt, "Thug" as the neo-racist term of choice, to the slightly less overt, such as The New York Time's claim that Michael Brown was "no angel." This split is as much one of images as it is of narratives, as the signs and symbols of "hoodies" and graduation gowns present victims as deserving or undeserving. The stories do not just cover the causes and characters involved, but ultimately bear on the solutions as well. Calls for body cams on cops, demands to repeal "stand your ground" laws, or demands to arm church pastors, are all based on particular understanding of the causes and conditions of events.

We could thus conclude that this contestation of narratives is politics, and it certainly seems to function that way. Every event is immediately split into the same old stories, bad apples versus racist police forces, and the same old solutions, gun control versus open carry, and so on. However, this kampfplatz of interpretations is structured by conditions that remain out of sight. The first, and most obvious, has to do with the material conditions of dissemination of narratives. Fox News' "Thugs" and New York Times' claim that Michael Brown was "no angel" have the power of money behind them. The material conditions of the spectacle play an important role in the dissemination of various narratives, although this can be countered by the material presence of bodies on the streets.

Citton's concept of "mythocracy" makes it possible to see other conditions for the dissemination of narratives, no less material but less apparent. For Citton "myth" is always transindividual, situated at the intersection between individual desires and collective meanings. A myth is only effective, can only take hold, if it captures an individual's imagination. Yet, at the same time, these individual imaginations are themselves shaped by myths, by past narratives. No one dreams alone. Citton's focus on "myth" concerns less the specific ideological dimension of this or that story or film, than its general conditions. As much as "individualism" can be understood to be a particular theme underlying diverse story lines from mythic "chosen ones" to  "cops who play by their own rules," it is a meta-scene, a generic template, that crosses from fiction to daily life, informing how we make sense of the world. Individual actions is the default setting of how we make sense of the world.

A popular cartoon and internet meme shows how individuation is unevenly distributed according to racist myths. Muslim shooters are terrorists, African Americans are "thugs, and whites are mentally disturbed individuals. Individuation, even pathological individuation, is a privilege bestowed to the majority. I use this term in Deleuze and Guattari's sense in which majority is less about an actual count, than how one is counted. To be the majority, to be the norm, is to always already be individuated because your collective condition is taken for granted. Beyond this important critical and polemical point there lies a real problem: how in this conflict of competing narratives is it possible to make manifest systemic and collective conditions, to present the systemic nature of white supremacy, the structural conditions of police violence?

It is likely that Dylann Roof acted alone, or that the various members of the police forces responsible for the killings listed above have their own individual histories of racist comments, or actions, making them appear to be the "bad apples." Despite this I would argue that their own actions, even their delusions, are themselves produced and reproduced by the structures and myths of racism and white supremacy. These myths and structures are difficult to see, however, especially for us white people who swim in them like a fish in water.

Citton argues that one of the politics, left politics, of "mythocracy" is to "challenge the deal" [récusation des Donnes], to contest and reveal as produced what is taken as given. Individuals, and individual actions are part of this "deal," and as such they as much the end point of a process that exceeds them as they are the author of their actions. The challenge is not to just contest the dominant narratives that arrive after the fact, although this work of contesting racist narratives is important, but to change the story that tell about ourselves as individuals and a nation. This seems to me to be the current political moment; it is a matter of confronting "white supremacy" not in terms of laws and institutions but myths and sensibilities--the very myths and sensibilities that shape our sense of ourselves and the world. 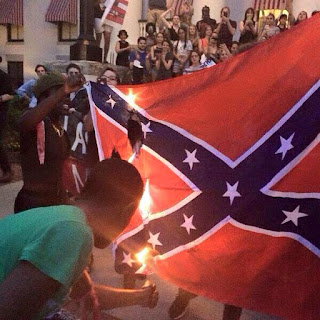 Posted by unemployed negativity at 11:08 AM