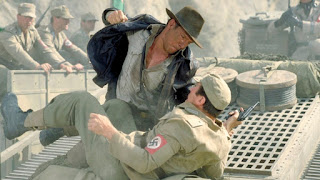 I am not really interested in debating Confederates, except to point out that in an odd twist worthy of Philip K. Dick in the weeks since the show was announced we have gone from debating a fictional show in which the "South" won the civil war to a President who has openly expressed sympathy for racist defenders of a statue of Robert E. Lee.  More on those events in a minute. What I am interested is the thesis Coates advances here, that Nazis are fair game for culture, books, movies, etc. precisely because the Nazis have been relegated to the dustbin of history. 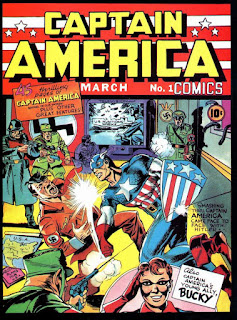 In some sense Coates is right, Nazi's have had a long and storied life in popular culture. That life is in some sense split into two. On the one hand we have the go to bad buys of comic books, action movies, and serials. Villains whose skull and leather aesthetics seem like something invented by Jack Kirby, and whose plans for world domination seem torn from a comic book. On the other hand we have the Nazis of "serious" literature and film, the ones that compel us to gaze into the abyss of humanity. Summer Nazi and Oscar Bait Nazis. Sometimes made by the same filmmaker. Steven Spielberg gave us both a monkey sieg heiling and Schindler's List. This duality of the Nazi, caught between comic book super villain and examination of the nature of evil reminds me of a passage in Badiou's book on Ethics, part of his polemic against human rights (As an aside I just want to put forth the opinion the scandalous and unjustified claim that I think Badiou is a better polemicist than a philosopher). As Badiou argues, human rights ideology must elevate Hitler to something incomparable while comparing everything to it. (What US intervention has not been called "worse than Hitler"?) As Badiou writes:

In fact, this paradox is simply that of radical Evil itself (and in truth, of every mise en transcendence of a reality or concept). The measure must itself be unmeasurable, yet it must constantly be measured. The extermination is indeed both that which measures all the Evil our time is capable of, being itself beyond measure, and that to which we must compare everything (thus measuring it unceasingly) that we say is to be judged in terms of the manifest certainty of Evil. As the supreme negative example, this crime is intimitable, but every crime is an imitation of it.

and then on the next page

"For the reality of the inimitable is constant imitation, and by dint of seeing Hitler's everywhere we forget that he is dead, and that what is happening before our eyes is the creation of new singularities of Evil.

I am not saying that this is the same thing, but the paradox Badiou discusses of transcendence and imitation, unmeasurable and measured, is echoed of sorts in the pop culture divide that represents some Nazis in four color newsprint and others in arty black and white. The strongest point of contact is in what both divisions leave out, and that is any reflection on history or society, anything that made Nazi Germany anything other than an ethical matter. It is evil.

So where does this leave us now, with the apparent resurgence of Nazi ideology?  Of course it never went away, but it is striking how in reading about Charlottesville, and watching the Vice Documentary how the Nazi stuff is not just for show. Many of the participants go full Nazi, invoking jews and secret cabals of bankers. (If that is not imitation I do not know what is.) As much as it is fun to revisit the history of Nazi-punching in pop culture, it seems that it is necessary to address what is left out by both comic books and ethical oppositions, the connection between Nazi ideology, and fascism, to history and society, to capital. Which is just another way of saying what Max Horkheimer said, "Whoever is not prepared to talk about capitalism should also remain silent about fascism." It is not enough to punch Nazis as they emerge, playing a game whack-a-mole; it is necessary to address the political and economic conditions that produce them.
Speaking of punching Nazis:
Posted by unemployed negativity at 10:01 PM