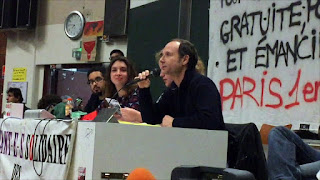 
Earlier, when writing a brief blog review of Lordon's Imperium, I argued that what the book lacked was any account of the relationship between the economy and politics of affects, that Lordon had simply continued to think of politics, and political belonging, from the perspective of affects without considering the relation between politics and economics.

Now it occurs to me that Lordon does suggest a particular Spinozist, or rather a particularly "affective" understanding of this division. In Willing Slaves of Capital (don't get me started on the translation of the title) he writes the following,

The impersonalisation and delocalisation of the process of collective self-affection provides it with the best means of making itself imperceptible, or indeed tolerable, even as it nevertheless produces normalisation effects that are no less intense, and at times even painful. ‘Given an equal cause of love, love toward a thing will be greater if we imagine the thing to be free than if we imagine it to be necessary. And similarly for hate.'Spinoza touches here upon the affective mechanism that traces from the outset the limits of constructivist political projects, which contrasts strongly to the historical strength of capitalism, at least up to a certain point. What makes the constructivist agency a focal point for very intense affects of hate is the possibility of ascribing the conditioning to a local, identifiable cause, one that is thought to be free (the party, the State, the Central Planning Committee), and to which a contingent intentionality can be imputed. In contrast, capitalism’s market forces, despite grinding people down no less violently, appear as a ‘systemic effect,’ thus unassignable, without a centre and without deliberate design behind them; they therefore seem almost like a necessity, which for Marx was the essence of commodity fetishism, and which is therefore conducive to all the rhetorical strategies of depolitization through “naturalization”. [Translation modified]

What Lordon cites from Spinoza becomes the basis for an understanding of the division between the economy and politics not at the level of structure and determination, but at the level of affect and imagination. The economy, the capitalist economy, appears as the realm of necessity. Behind every layoff, every cut to wages, or increase of hours there is an appeal on the part of the managers to market forces, competition, and pressures, and so on until ultimately the quasi-natural laws of competition are invoked. In contrast to this politics naturalization, politics appears as the realm of freedom (not to mention equality and Bentham), it is where politicians act, imposing doctrines and decisions that bare their proper names. We are angry at politicians because they could have done otherwise, but bosses' "hands are tied." Politics, and politicians, elicit hate, anger, and indignation, while economics only elicits resignation.

The emphasis must be on appear, because as Lordon argues, the Marxist critique can be understood as seeing the contingency of this necessity, capital is not a manifestation of natural laws but is itself the product of historical transformations, while at the same time seeing the necessity of contingency, the state and with it politicians are compelled to respond to economic conditions. Case in point, austerity is not some diabolical plan, as some would claim, but a political response to declining profitability, and so on. Necessity and contingency are less two different realities, one referring to the economy and its structures the other to politics and its decisions, than two different ways of grasping the same reality. (A more thorough consideration of this idea would have to reread Spinoza's discussion of the contingent and necessary in the passages on Law in the Tractatus Theologico-Politicus) One could argue, following the points about anger above, that the latter, politics, functions not so much as the ideological justification of the former but its release valve--it gives the anger and frustration of capitalism names and faces.

This would be one way to understand Trump's populist appeal; his constant invocation of "idiots" running government and "bad deals" is meant to suggest we could have a different capitalism than the one that we are living through, a capitalism defined by American prosperity rather than globalization. A capitalism without capitalism, to use Zizek's phrase, which was, after all, offered as a definition of fascism.

However, it is not Trump that is on my mind as I write this, but Lordon, or rather the series of admirable and impassioned speeches that Lordon has offered in support of the "Nuit Debout" movement in France in the last week. This movement is, as I write this, is in the process of forming both its perspectives and actions, including the possibility of a general strike. Lordon's own observations of the affective distribution of necessity and contingency stands as both an explanation and a warning of a sequence we have seen several times as of late with various forms of left populism, in which economic indignation gives rise to a political party, a party which then finds itself as the contingent face of the same necessity, as parties which ran against austerity end up repackaging the same austerity--neoliberalism with a socialist face. The only way to break this dialectic of necessity and contingency of becoming the contingent face of economic necessity is breaking contingency, which is to say politics, into the sphere of necessity itself. Taking what is presented as an impersonal, almost natural force, the market, and subordinating it to human actions and decisions. So, yeah, a general strike, but also so much more.

Posted by unemployed negativity at 8:49 AM