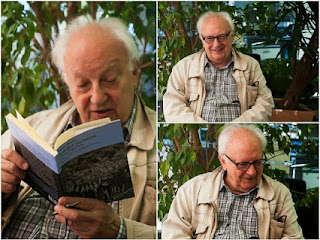 In a remarkable interview published in 2012, but which I happened to discover recently, Balibar credits Foucault for the concept of what he calls a "point of heresy." He defines the concept, or rather practice as follows, drawing points of intersection, or perhaps heresy, between it, Althusser's symptomatic reading, and Derrida's deconstruction as practices of reading.

"I am indebted to Althusser’s symptomatic readings and Derrida’s deconstruction of philosophical texts, even if I approach them in my own way. Things became much more interesting for me—this began some time ago, and this is how I’ve always lectured about philosophers—once I became interested in the feedback effects and the repercussions of conflict or points of heresy within philosophical works themselves. This brings us back to the closely related issue of aporia. At my habilitation defense, [Alexandre] Matheron said: “you are always looking for contradictions!” He always sought to reconcile—very admirably, I might add—every one of a philosopher’s claims, whereas I always sought to understand—inspired by the teachers I just mentioned—why a philosopher never writes the same text twice."

I cite this passage now as an introduction to some rather heretical remarks that Balibar makes about Foucault in his short book Citizenship. Balibar writes

"Above all, let us not forget that there is a positive counterpart to the development of these procedures of control, but one which is no less compatible with the political form of citizenship. This is the development of a new individualist ethos of "self-care" (souci de soi), which holds that individuals must moralize their own behavior by submitting it to the criteria of maximal utility or the future productivity of their individuality. It is not recognized enough, it seems to me, that Foucault in his later years developed the theme of "self-care" ironically, both as a final gesture breaking with the philosophical training of his youth, and as a critical perspective from which to view the contemporary proliferation of "technologies of the self."

I would call that heresy at least with respect to a dominant Anglo-American reception of Foucault in which the "technologies of the self" are presented as Foucault's last word. The technologies of the self overcome Foucault's inability to provide normative criteria while simultaneously bringing Foucault back to the fold of the history of philosophy. Agency, individuality, and the ancient greeks are all restored in one gesture. If you add to this the course on neoliberalism taking place in the same years you get a Foucault perfectly suited to the individualizing ethos of self care in neoliberalism. To paraphrase Marx, "The technologies of the self in which the neoliberal mode of production prevails appears as an immense collection of life hacks."

I am honestly not sure if Balibar is right about Foucault, but, like most heresy, his point is provocative. Balibar's statement of irony has as its first provocation driving a wedge between anyone who would like to link together the course on neoliberalism with the last two volumes of the History of Sexuality. Technologies of the self are not some terrain of liberation or freedom, but the ultimate containment of energy and activity in a world with few outlets. Beyond this polemical wedge there are a few theoretical effects of Balibar's point.

First, it resumes a point he makes in his essay "Three Concepts of Politics: Emancipation, Transformation,Civility." In that essay Balibar places Marx and Foucault in the same theoretical terrain, as thinkers of "transformation,"or the "heteronomy of the political." Both Foucault and Marx think politics under conditions which could be described as economic or social, conditions which are outside of, but determining of politics as its is conventionally understood, the sphere of citizenship, rights, etc. However, while Marx and Foucault intersect at the same point in the seventies, the disciplines and biopower being fairly analogous to the "hidden abode of production," they eventually diverge. As Balibar writes,


"Particularly interesting in this theorization, as deployed in the concrete analyses which run from Discipline and Punish to the College de France lectures on ‘bio-power’ and ‘bio-politics’, is the fact that the distance between conditions and transformation is reduced to a minimum: indeed, the two become contemporaneous (in a present which is at once ontological, ethical and political, the analysis of which is the very aim of that critical thought which Foucault attempted, at the same moment, to redefine combining the teachings of Nietzsche and Kant). However, the fact that the practical distance disappears—that is to say, that the conditions of existence which are to be transformed are woven from the same cloth as the practice of transformation itself; that they are of the order of an action upon an action, and form part of an infinite network of ‘asymmetrical relations’ between various powers, between dominations and resistance—in no way signifies that the conceptual difference is without object."

Reading this statement through the point of heresy above it is possible to see a question of the disappearing technology in the technology of the self, as the focus on institutions, the prison, the family, school, etc., gives way to a much more classical idea of praxis as the work of the self on the self in self care. Or, put another way, if Marx's politics of transformation was to posit the inseparability of praxis and poiesis, of acting and making, care of the self risks become just another praxis detached from poeissis, from its material conditions and effects, collapsing into itself. Irony might be a matter of forestalling such a collapse, keeping the heteronomy, materiality, and transindividuality in what risks being read as an entirely individualistic project.

Second, and much more provisional, one of the striking thing about the course on biopolitics/neoliberalism, at least read in terms of the previous courses has to do with the status of counter-conducts. In Security, Territory, Population Foucault gives a great deal of historical and political importance to "counter-conducts," those practical points of heresy in which the dominant practices are turned against their hegemonic articulation. Foucault initially describes these in terms of pastoral power. These counter-conducts are heretical in that they take the dominant practice seriously, but push them into new directions. Aestheticism pushes the refusal of this world to new heights, becoming a new way of life. Like heresy, counter-conducts simultaneously affirm and negate, or maybe "détournement" in the situationist sense, the dominant practices. It is striking that counter-conducts are almost entirely absent from the subsequent course on biopolitics, better known as the course on neoliberalism. This absence is provocative. What would a counter-conduct of neoliberalism be? Of course one could refuse to maximize one's human capital, drop out, etc., but barring a trust fund one needs to work to survive. Neoliberalism is perhaps defined by its ability to encapsulate its outside. All DIY projects, escapes into local communities, attempts to break from its imperative to maximize utility at minimum cost are rebranded as micro-entrepreneurs. Distancing from the imperatives of neoliberalism can be seen as just another way of embodying them. Irony becomes just another branding ethos. Enter the hipster. The hippy and the punk were counter-conducts, the hipster is what is left of counter-conducts when they are no longer counter, but become part of self-marketing.

To end with a provocation: to go beyond the irony of the "technology of the self" is to restore the connection to technology, to the material conditions that sustain and contain us, and to push the self beyond the individual.

Posted by unemployed negativity at 12:34 PM

This made me think of the 'early' neoliberal period, where 'slack' was something worth noting. Or, maybe, could be noted without it being threatening. I think if there is a material counter-conduct, one connected to sociotechnical conditions, then perhaps its not to be found in the creative or artistic (or DIY) fringes, making 'another world', but in the 'hard to see' doing-the-bare-minimum, in performing enough so the non-performance goes unseen. If we are in a period of over-supply of labour, of too-much-productivity and the harnessing of ever-more human capacity (creativity, virtuosity, etc), then maybe counter-conduct is to be found in dragging our feet, something that manifests as the fear of hours lost at work to facebook, etc. Stretching the point, perhaps the endless eulogies about creativity and DIY/maker-culture mask a broader fear of a generalised 'slacking off', like the period around the Great Depression where the work ethic waned (as mapped so well by Sharon Beder in Selling the Work Ethic). Maybe what slack affirms is the performance, one that performs performance itself without actually engaging in it?

Of course one also thinks of the Fanon of _The Wretched of the Earth_ in this context, where the revolutionary masses, the masses who collectively take up arms in struggle, are the collective protagonist that heals, learns, is transformed and transformative. All of this doing in Fanon is done collectively and in armed struggle.