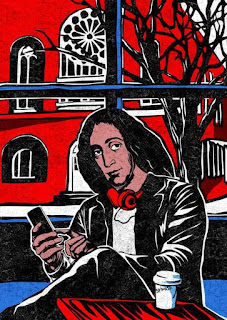 One could describe the trajectory of Marxist/Spinozism in the twentieth century as a trajectory that passes from epistemology through ontology to anthropology. With Althusser the focus was on the break between the first and second kind of knowledge, with the passage from ideological imagination to adequate scientific knowledge. As much as Althusser introduced immanent causality to Marxism it was primarily an epistemological matter, of grasping the cause in and through its various effects. Negri turned to ontology, or as he often put it, metaphysics, understanding immanence as the immanence of potentia, of power. The autonomist hypothesis becomes not just a way to make sense of capital, but all of reality. Everywhere Potestas, God's power or transcendence is asserted, we must find potentia, the immanent power of social relations and the human imagination. The last, and most recent turn, found in the works of Lordon, Citton, and, in a certain sense, Jaquet could be called "anthropological." The focus is less on the problem of inadequate and adequate ideas, understood as the problem of ideology, or the self organization of power, but on desire, affects, and imagination.
Two qualifications are necessary here. First, it is not entirely true that Spinoza's anthropology is an entirely new subject of inquiry. Alexandre Matheron's "L'anthropologie Spinozist" was published in 1978, and Etienne Balibar's writing on Spinoza has focused on his account of sociality and his anthropology, specifically the affects and common notions as aspects of social relations. I am sure other texts exist as well. Second, what is called an anthropology is necessarily qualified by Spinoza's anti-anthropocentric ontology, resisting any tendency to see humans as a kingdom within a kingdom. As Matheron argues, humanity, is perhaps best understood by the quantitative increase and qualitative complexity of the capacity to affect and be affected. The differences between humans and animals are, in certain circumstances, not as great as those that separate different humans, such as infants and adults, to take Spinoza's favorite example.

One could also point out, as I have tried to do elsewhere, that many of these readings of Spinoza's anthropology are not only selective with respect to Spinoza's ontology, but selective with respect to Spinoza's consideration of human existence. Lordon takes up desire, Citton the imagination, and, in some respects, Balibar focuses on knowledge and ideas. However, a Spinozist anthropology, if such a thing was possible, would take as its object the multiple intersections of desire, imagination, and reason. These three aspects of human existence intersect not just in a given individual, even though an individual can be defined by a particular manner of desiring, imagining, and thinking, but they also intersect in the world. This seems to be the practical impact of Spinoza's refusal to see man as a kingdom within in a kingdom, affects, imagination, and reason are not just in us, in human heads and bodies, but traverse the world we live in. 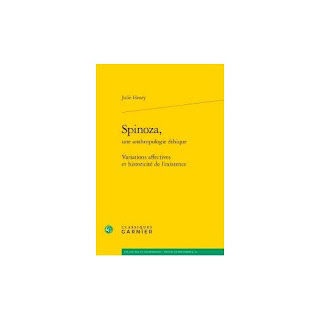 Julie Henry offers a different, albeit oblique response to this question in Spinoza, une anthropologie éthique: variations affectives, et historicité de l'existence.  Her emphasis is not so much on the question of philosophical anthropology, but what she calls an "ethical anthropology." An ethical anthropology focuses on what many ethics elide, how to make the ought an is, to transform the means and ends of action. Ethics, at least in its modern formulations, has a lot to say about what should be done, and the criteria for arriving at it, but little to say about how to become ethical. Ethics is not a morality, a simple declaration of the right or wrong, but an investigation in the manner in which different comportments, ways of thinking and acting, replace and transform each other. This is Henry's focus, Spinoza's tracing the lines of transformation, a becoming ethical understood not as some eventual passage to a final state, but as a passage of transformation itself. It is a matter of reading ethics as a becoming, and a becoming as an ethics. In doing so she excavates Spinoza's different thoughts on transformation and identity running through the Ethics.

I should say parenthetically that Henry's book is perhaps one of the few that actually makes it seem that there is actually something worth thinking about in terms of Spinoza and ethics. This is not Spinoza's ethics reduced to the generic demand to "be reasonable" nor is it an ethics spruced up with Nietzschean appeals to becoming active; it is ethical transformation, the labor of changing one's actions and reactions.

Henry's ethical anthropology cuts both ways. It cuts against the moralism and the imperatives of ethics on the one hand, but also against the rigidity and identity of any philosophical anthropology, any attempt to figure humanity as something static. Henry argues that transformation in Spinoza is not simply the matter of developing or perfecting already existing faculties, but adopting new relations and new comportments. Becoming ethical is comparable to becoming adult, "adulting" in the parlance of our times, the radical transformation from an infant to adult that fascinated Spinoza. It is a matter of a transformation of imagination and affects, a different way of thinking, feeling, and acting, that in turn is a response to different situations. As she writes, becoming ethical is neither natural, nor counter natural. It is a transformation of one's basic structure and comportment.

Henry's interest is not, as with the case of Lordon or Citton, in putting a philosophical anthropology to work in the critique of political economy. Which is not to say that her work is without its implications for the latter. Her work is closest to that of Jaquet in that she posits the indeterminacy of Spinoza's determinism, or, in Althusserian parlance, the simultaneity of underdetermination and overdetermination. The various determinations of thoughts, affects, and imagination, lead to the singular trajectory of different lives. In Spinoza these singular trajectories always threatened any attempt to organize politics on the basis of shared imaginations and affects, constituting the inner limit of theocracy. It might be worth asking, in light of Lordon and Citton's work, to what extent that limit has been surpassed by contemporary capitalism, does contemporary subjection still run up against the limit of singularity? Or, and this might be the start to an answer of why people fight for servitude, does the contemporary economic and ideological order, not only encompass singularity, appearing to give a space for every striving, but appear as the general ground and condition of transformation/
Posted by unemployed negativity at 12:13 AM