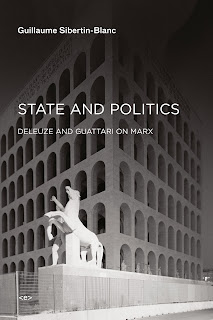 Guillaume Sibertin-Blanc's Politique et État chez Deleuze et Guattari: Essai sur le matérialism historico-machinic has been translated into English as State and Politics: Deleuze and Guattari on Marx. In the past twenty years since I first discovered Deleuze and Guattri I have gone from avidly reading everything that came out on them to barely ever picking up a book on Deleuze. At first the number of books on Deleuze  was a slow trickle, but as the trickle gave way to a gusher of canonization, I have become much more selective, even falling behind on some of the better books. I have a longer review of Sibertin-Blanc's book coming out with Historical Materialism, but I thought that I would post one of my responses to the book in order to mark its translation, just to suggest that it is definitely not one to skip.


It is perhaps no surprise that Sibertin-Blanc argues that Deleuze and Guattari’s theory of social relations, or assemblages, must be understood in terms of its fundamental Spinozism. First, and foremost there is the affirmative nature, social relations or social formations, are defined not by their contradictions but by their creative movements of transformation. Gilles Deleuze’s earlier work on Spinoza argued that the relationship between bodies and ideas, the order and connection of ideas and things, was best characterized as parallelism, as the identical order of two different attributes, the order and connection of things and ideas. It is precisely this same process that defines Deleuze and Guattari’s theory of what constitutes social relations, or in their terms, an assemblage. An assemblage is both a collective assemblage of enunciation and a machinic assemblage of bodies, it is both an intermingling of bodies and an organization of acts or statements. These two aspects, bodies and statements, actions and events, do not determine or affect each other, but are each affected or determined by their relative deterritorialization or reterritorialization, by their processes of abstraction and concretization. It is this process of differentiation and transformation that constitutes the order and connection of bodies and ideas, actions and statements.  As Deleuze and Guattari define an assemblages,

"On the first, horizontal, axis, an assemblage comprises two segments one of content and one of expression. On the one hand it is a machinc assemblage of bodies, of actions and passions, an intermingling of bodies reaction to one another, on the other hand it is a collective assemblange of enunciation, of acts and statements,  of incorporeal transformations attributed to bodies. Then on a vertical axis, the assemblage has both territorial sides, or reterritorialized sides, which stabilize it, and cutting edges of deterritorialization which carry it away."

Bodies and enunciations, acts and statements, do not determine or affect each other, but are each expressions of the same process of reterritorialization and deterritorialization. Everything that has made Proposition Seven of Part Two of the Ethics a metaphysical riddle is maintained. Bodies and things are at once two different perspectives on the same thing, the same substance, while remaining causally distinct. Between Spinoza’s substance and Deleuze and Guattari’s deterritorialization there Marx’s theorization of a mode of production, the latter makes it possible to shift the problem of “order and connection” from metaphysics to social relation, to capitalism as simultaneous an organization of bodes and a structuring of statements. Spinoza’s ontology, the ontology of substance grasped in terms of two different attributes is marshaled into the solution of a problem of political, economic, and social theory, the Marxist problem of determinism, of the base and superstructure. Bodies and enunciations, forms of content and expression, must be seen as distinct, as having their own specific causalities and effects. They are connected not by a causal relation, by their effects on each other, but by the general process of deterritorialization, of abstraction and displacement. This last point is where Deleuze and Guattari differ from both Spinoza and Marx; it is not a matter of substance, or even of something seen as a mode of production with its problem of stability and transformation, reproduction and crises, but of the process of transformation itself, deterritorialization.

Sibertin-Blanc’s reading stresses this innovation, but pushes it in a different direction, one influenced by a different reading of Spinoza. For Sibertin Blanc it is not the parallelism, but the overdetermination of the different assemblages, of the different conceptual oppositions, that defines Deleuze and Guattari’s account of social relations. In doing so Sibertin[Blanc proliferates the various oppositions and dualisms rather than reducing them to a central ethical opposition. Instead of seeing everything reduced to a Manichean opposition between the war machine and the state, the state and its nomads, Sibertin-Blanc argues that it is necessary to grasp the way in which this opposition, an opposition over territory, necessarily intersects with the different strategies and assemblages, with the state as an apparatus of capture, and with the conflict of smooth and striated space  all of which have their own tensions and oppositions. That the state is both a spatial logic, a domination of space according to the striation of space, the subordination of space to lines, and an apparatus of capture, as well as being an image of thought means that any concrete state, any existing state can only be thought as the overdetermination of different assemblages. Given that Sibertin-Blanc’s book on Deleuze and Guattari is the product of a thesis written under the direction of Pierre Macherey, it is possible to see this as a conflict of different Spinozisms. Deleuze’s parallelism versus Althusser’s overdetermination (even if overdetermination is a concept defined more through references to Freud and Marx than Spinoza). In the first what is stressed is the identity and difference of things and ideas, machinic assemblages of bodies and collective assemblages of enunciation, which must be grasped as simultaneously distinct and two different perspectives on the same substance, or in Deleuze and Guattari’s case, on the same process of deterritorialization. Causal autonomy is maintained along with mutual implication. While in the second, what is stressed is the sheer multiplicity of different causal series, different assemblages, the state must be thought as simultaneous an apparatus of capture, and a phenomena of overcoding, as both an organization of political space and the constitution of an image of thought. These multiple assemblages, multiple strategies, must be thought of in terms of their specific articulation, their specific actualization in a given historical situation. Sibertin-Blanc stresses the conjunctural definition of the different assemblages, shifting their opposition from not only any “ethical” opposition of good and bad, but also from the residue of base and superstructure or its idealist inversion. There are not just two different orders, bodies and enunciations, machines and discourses, but multiple effects of different assemblages.

Without making this an entirely intra-Spinozist affair, with all of the corresponding endo-violence that entails, I think that an overdetermined reading of Deleuze and Guattari, a reading that stresses overdetermination in the different assemblages and machines, offers a way out of two of the problems burdening their thought. The first is the periodization, a periodization, more rigid than even Marx's, that understands society as passing from barbarism to capital, or, more to the point, discipline to control. Deleuze and Guattari's statements regarding archaisms with a current function need to be expanded to posit the differential, rather than linear dimension of transformation. On this point it might be worth rereading that new edition of Reading Capital. What is perhaps most untenable in their work is the opposition between codes, qualitative, embodied, and indirect, and axioms, quantitative, abstract, and direct. Or, more to the point, their failure to think reproduction, to see reproduction as simply a matter of axioms reproducing themselves. Deleuze and Guattari bend the stick too far in dispensing with the family, throwing the social reproduction of domestic labor baby out with the psychoanalytic bathwater. Sibertin Blanc has done an excellent job of arguing for the overdetermination of their concept of the state, seeing it as made up of both material and ideal dimensions, of multiple assemblages constituting power, space, and identity. What perhaps remains to be done is an overdetermination of their concept of capital, of the economy, the economy cannot be simply identified with production, or with purely quantitative axioms of labor and money; it must be thought of in terms of its material and ideal aspects, its affective and subjective dimension. Of course this is exactly what Deleuze and Guattari offer, their thought has the conditions for such a theorization, micropolitics, assemblages, major/minor, all open up alternative ways of conceptualizing power, politics, and collective belonging. What remains to be done is overcoming the divide that leaves affect out of the economy and social reproduction out of production. In this task Sibertin Blanc’s book provides an immense guide, showing how a rigorous reading of Deleuze and Guattari, can produce not just new concepts, but new relations between concepts.