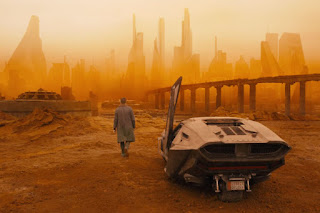 All of this might just be a preamble to say that any sequel would necessarily fail to meet my expectations: just as there is no Star Wars film that could possibly recreate seeing the first one at seven, there is no Blade Runner sequel that could recreate having my definitions of film challenged at thirteen.
There is sometimes a crude dialectic to sequels when they do not try to repeat the original; if the first one travels back in time, the second will travel into the future and so on, creating difference in the crudest possible terms. There is a little of that in Blade Runner 2049. Where the first film gave us what might be a human hunting replicants the second gives us a replicant searching for what might be a human. (This change further underscores the fact that the blade runner as basically a slave hunter. As Chamayou demonstrates historically slave hunters were often drawn from the very population they were meant to patrol) At a deeper level the first film presented us with a replicant that believed she was real because of fake memories, while the second gives us a replicant who believes he is fake because of real memories. Or, rather, he is aware that memories are implanted and thus understands his own memory, his subjectivity to be made rather than formed. Sticking with these crude reversals, and holding off on the spoilers for a bit, the most interesting reversal has to do with the Voight-Kampff test. 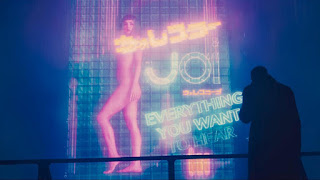 This is a high tech version of the paradox of "emotional labor," the labor of bartenders, baristas, and exotic dancers: it is expected, demanded, and in some sense programmed, but must always appear as freely undertaken, as autonomous. We all know that the barista at our local coffee place must smile and laugh at everyone's dumb joke, but we delude ourselves into believing that he or she is laughing  at our jokes, that we are truly "liked" by the people we pay to act friendly towards us. "More human than human" is not just the Tyrell company motto, but  everyday life under the regime of affective and caring labor. We are constantly confronted with people who are friendlier to us than we deserve, greeting our gruff indifference with friendly smiles and courteous service, but these people are for  the most part barely seen as people to us. More human than human is never far from than less than human. Perhaps we need a Voight-Kampff test for day to day life, to navigate the confusing world of emotional labor, and remind us that there are people underneath those smiles. Perhaps someone can design an app.