The Industrialization of Nostalgia 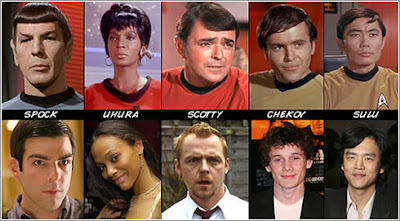 “Capitalism is only a repetition” –Alain Badiou

In recent years the remake, or reboot, has ceased to be one sort of film that Hollywood produces to become its dominant form, at least when it comes to summer movies. The dominant films this summer, X-Men Origins: Wolverine, Star Trek, Terminator: Salvation, Taking of Pelham 123, Land of the Lost, G.I. Joe, and so on are all remakes of something that existed in some form or another, comic book, television series, movie or cartoon. Of course much can be made of this transformation of contemporary film, and I am sure that more qualified folks than I will weigh in on the issue. However, I thought that I would jot down the following thoughts.

“Let’s get an old movie, like something from the eighties.”—Overheard at a videostore

As the quote from Badiou makes clear, capitalism can be defined as the absence of history. It is what Jameson refers to as the eternal present. This criticism of capitalisms lack of historical consciousness is as old as Marx himself, and it takes on myriad forms. What specifically does it mean with respect to the Hollywood remake. It seems to me, and this perhaps the wrong way of looking at it, is that the assumption underlying the remake is that people, at least the dominant movie going audience, does not want to watch a film that is twenty or even ten years old. Special effects have changed making the once awe-inspiring now laughable crude, and this might explain the need to constantly update films as a purely technical matter--like new phones or faster computers. The remakes is not entirely a technical matter and many films that used minimal special effects are remade. When one watches a film from even a few years ago one needs to possess a bare minimum of historical consciousness to orient oneself in terms of the technological, social, and cultural points of reference. You have to know when it is reasonable to expect someone in a film to use a cellphone, or a computer, both of which have become ubiquitous in contemporary films. Or, for that matter, what counts as the expected fashions of a period versus a personal affectation. This is only history at its most micro and quotidian level, there are also the historical events that structure the narratives of films. A remake removes the need for this minimal displacement: one no longer has to transport oneself to the cultural, technological, and social milieu of another period. One no longer has to transport oneself to the world of nineteen seventies in order to understand the Taking of Pelham 123; one no longer has to wonder why someone on the train does not just use a cellphone. The world is remade in the form of the present. “Look they are using an iphone.” Moreover, the stars, music, and clothing are all completely recognizable. Everything is ripped from the headlines of the latest celebrity rag. It is not accident that the films, once made and released on DVD, will end up on the adjecant rack at the supermarket checkout. Films have become much more disposable as the time between original and remake shrinks.

This idea of the remake as effacing history can only, at best, account for half the picture. Why not just make new films, with current actors, under contemporary conditions? Why tarry with the past at all? Of course the standard explanation to this is that Hollywood has run out of ideas? But there must be more than this cliché, especially since the originals are not ideas, in any strict sense of the term. G.I. Joe and Transformers were basically half-hour long toy commercials, and has anyone seen the original Land of the Lost? There is nothing in the original that merits repeating. The remake does not use the original, which in some sense is its raw material, for its ideas, for some script or narrative. The remake utilizes the original, the TV show or comic book, at the level of memory.

Contemporary philosophers such as Maurizzio Lazzarato and Bernard Stiegler have focused on the relationship between contemporary capitalism and memory, the latter even coining the phrase “the industrialization of memory” to describe the way in contemporary cultural commodities such as films or programs structure their own sense of temporality. I think that the modern remake is more of an industrialization of nostalgia, or, more to the point a primitive accumulation of nostalgia, an enclosure of hazy, happy memories. The studio is not so much remaking the original film, but utilizing the name and associations to drum up nostalgia. There is a phrase that has become popular in various websites where people discuss film, a phrase that people use to condemn the various remakes and reboots, that phrase is “raping my childhood.” Now the trivialization of rape implied in the phrase is no doubt offensive, but it does get at something essential. Remakes are aimed at the childhood memories of a generation, They address us not as adults, but as children. As Adorno wrote, "It is no coincidence that cynical American film producers are heard to say that their pictures must take into consideration the level of eleven-year-olds. In doing so they would very much like to make adults into eleven-year-olds.” Contemporary fan culture bears witness to this in that it often insists that the rights of the eleven year old's memory takes precedence over everything else.


Nostalgia against history: there is no need to go outside oneself, to imagine other conditions, not when every film becomes one’s own private screening room.

Posted by unemployed negativity at 4:02 AM

Or you could think of it as just continuing to manufacture a variation of a product that has already been popular for a long time instead of taking a chance and making something that people will perceive as being more of an unknown.

Good point, since all of these remakes and reboots aim at "franchises" (a telling word if there ever was one) series that can produce the same. It seems that Hollywood's ideal is the James Bond franchise, which is impossible to say if it is a series of sequels or remakes of the same film. Nothing changes about those films except the cultural reference points.

Why has there been no remake of Warhol's Empire? Or his Sleep?

I guess the question would be: what would we have to do to Empire to be able to make a non-trivial remake?
Focus on the surroundings? The fact that the WTC is no longer on the horizon? There. We've just made something a bit more complex out of Empire.

I sense you are right to emphasize nostalgia - pain for the past - and in our example, it would be the poignance of the emptiness where the WTC used to be.
The notion of history is mundane and pedestrian: a succession of failed wars or failed politicians, one after another.