This is your TV on Drugs 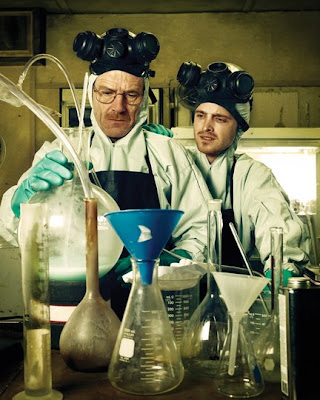 As something of a preliminary observation it is curious that three of the cable networks known for their high end shows (the sort that end up in TV critics list, box sets, and in “Stuff White People Like”) have programs that deal with the “war on drugs”: HBO has The Wire, Showtime has Weeds, and AMC has Breaking Bad. Except these shows aren’t really about the “war on drugs,” at least exclusively; even The Wire, which has the strongest claim for authenticity and spends the most time on the details of the drug trade, ultimately makes drugs something like a refracted lens from which to observe the decline of the American city. In each of these shows the drug trade becomes the equivalent of the monster or alien in old horror movies: the question is what does it signify, what does it stand in for?


One might wonder what is happening culturally and politically for the “war on drugs” to become a metaphor. After all it has not gone away, it still makes money and fills prisons. It has seemed to have faded into the background of cultural consciousness, however, so much so that it can never function as narrative material all on its own, it must stand for something. In some sense genres are constituted by this symbolization, film-noir, the western, the samurai film, or the sci-fi film are all defined by their mythologization of their narrative basis, it is symbolic of something. However, in all those cases the symbolism takes place after the fact, or with respect to an imaginary condition, with the war on drugs we are mythologizing our reality.

I do no plan to write about The Wire here, having done that before, but I should say that The Wire remains for me the gold standard of what can be done with the medium of television. Since The Wire ended last year I have searched in vain for something that might fill its void. To use my own drug metaphor: I have been searching for the television equivalent of methadone. I have tried Rome, Deadwood, Mad Men, Generation Kill, and now Breaking Bad, to varying degrees of success. I have watched some of those until the end and some have trailed off, but I have not written about any, until now.

The plot of Breaking Bad is fairly simple: Walter White, a chemistry teacher finds out that he has inoperable lung cancer and goes into the drug business (crystal meth) in order to provide for his families future. (I hear that this basic plot is similar to Weeds, which I have never seen). This basic plot is complicated by the fact that his brother is a high ranking DEA officer, and his business partner Jesse is a failed former student. It is by and large a character study, or two character studies, however, it is less interested in the socio-economic structures of the crystal meth trade than it is on the effect of this trade on the individuals involved. Despite all of this I have found Breaking Bad compelling.

Walter White is played by Bryan Cranston, an actor most famous for his part as the father in Malcolm in the Middle. He has a comic actors talent for slapstick, and in the first season he uses this talent to embody the indignities of contemporary existence. He is an enthusiastic teacher, but his enthusiasm is played to a comic effect in front of an audience of bored students. Money is tight, so after school Walter works at a carwash where he washes some of the same student’s cars. At first his diagnosis, and descent into crime, liberates Walter, he becomes a man between two deaths, as it were. His death sentence has been pronounced, so he is a free man. He uses this freedom to not only embark on a new life as a drug kingpin, but to stand up to the daily indignities of life—quitting his car wash job and standing up to obnoxious jocks and yuppies. It would be wrong, however, to see Walter as a rebel, as someone liberated from all societies norms; his entire criminal enterprise is all about one over-arching masculine ideal, being a good provider. It is one thing to escape the fear of death, a fear that keeps us from taking risks, it is another thing altogether to escape our most internalized ideologies. Walter, the formerly mild mannered chemistry teacher, can face down a drug kingpin, even commit murder, but he cannot stand the idea that his family would take money from others. 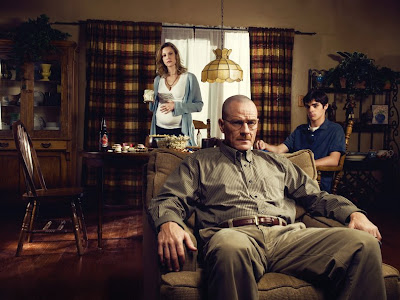 This ideal of a provider becomes increasingly pathological in the second season, as Walter destroys his position as father, husband, and teacher in order to make more money. In order to save his family he has to destroy it. [Spoiler Alert] I know that some people are frustrated with the much hyped season finale, as the scenes of destruction that were flash-forwarded to all season proved to be something else than the dramatic showdown with Mexican cartels. However, the real devastation happened a few seconds prior, as Walter proved incapable of recognizing his family’s respect, only seeing the need to make more money. The money starts out as something of an insurance policy, later a way to pay for cancer treatment, in the end it becomes its own end, a pure symbol of masculine power.

There is a way in which Walter's arc is structurally similar to Stringer Bell from The Wire. With Stringer the central narrative was one ascent, a Horatio Algers, by the bootstraps story of one man's attempt to go from drug dealer to real estate investor; accept that it was a dark perversion of this narrative, in which the two, dealer and business man, are shown not to be so different. The drug trade exposes the ruthless calculation that is at the core of capitalism. Walter's story is a story of a fall from respected family man to meth dealer, but the refraction is the same. What the show exposes, or pathologizes, is not so much the ruthless capacity to calculate, but masculinity itself, at least an ideal of masculinity as the provider.

As a final remark I will add that one of the interesting things about the show is that is in many ways a show about knowledge and its limits; chemistry first and foremost, which functions as the shows central metaphor (the composition and decomposition of relations, the storing and release of energy) while simultaneously serving as an actual mode of thought. Walter is ingenious at using chemistry to solve every problem from a dead car battery to a dead body. However, Walter is clueless about how the drug trade works, this is where Jesse his former student comes in. Much of the shows dark humor comes from the bickering conversations between the chemistry teacher and low level drug dealer, each ignorant about the other’s basis of knowledge. Ultimately the show deals with another limit of knowledge, not that of chemistry or the streets, but a fundamental ignorance about oneself. Despite all of his knowledge Walter reacts to everything emotionally, going from despair to rage. To risk a Socratic cliché, he does not seem to know himself, and this, and not the Mexicans or the DEA will be his undoing.

In the past few weeks I have also been reading a lot of Bernard Stiegler's cultural and political criticism of contemporary society. (More on that later) One of the things that he stresses is that modern hyperindustrial society is a society of pulsions, of drives, not desire. Our current media stimulates us to feel anger, humiliation, lust, etc., while destroying any sense of shared values, of the sublimated values necessary for desire. Despite his intelligence, Walter is very much a figure of this regime of affects, he feels a deep sense of anger, humiliation, and, at times, pride, but all of these affects are immediate and unyielding. He is less a character, a person with a history and a place and society, than a collection of affects and drives.

In the end this might explain the centrality of the "war on drugs" as a metaphor for understanding contemporary society. It offers the clearest illustration of need, addiction, and greed, of the market as the source of all our pain and pleasures.

Posted by unemployed negativity at 12:33 AM