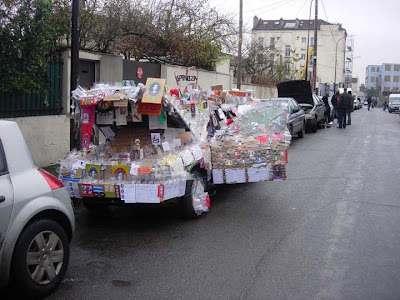 Picture of Spinoza-Car from The Bijlmer Spinoza Festival.

The idea for this post stems in part from Deleuze’s remark that encounters between independent thinkers always occur in a blind zone; that is, that one has to look beyond the stated terms of criticism and opposition to find the real intersection and connections. Of course the title comes from the hopeless romantic section of craigslist where people post adds hoping to connect to their barista or the guy buying lettuce in the supermarket. Unfortunately, it is not written in the actual form of the latter.


The case of Spinoza and Simondon would seem to fit Deleuze’s description perfectly. Many commentators, such as Muriel Combes and Etienne Balibar, have remarked on the virtual proximity of their ideas, a proximity for the most part overlooked by Simondon. This is not entirely true, Simondon primarily overlooks the connection where it would seem to be of most interest to contemporary interpreters, the idea of transindividuality. When it comes to Spinoza’s theory of the individual Simondon repeats some fairly standard clichés, seeing Spinoza’s philosophy as one that slips into a pantheism, making the entire cosmos one individual as it attempts to move beyond an anthropomorphic conception of the individual. This criticism is similar to the Ango-American response to Spinoza that sees in substance or the politics of a multitude “acting as if with one mind” the destruction of the individual into some higher order entity. This is not Simondon’s last word on the Spinoza, however; elsewhere, when discussing the experience of the transindividual, an experience that he compares to religion, he cites Spinoza’s cryptic passage of experiencing something that is “eternal.” For Simondon we experience something that is eternal in that we experience both our power and limits: we are aware that there is something in us that exceeds this moment, and something of us that is so ephemeral, disappearing the moment that it is experienced. In each case we are aware that our individuality is not the end all and be all of our existence. For Simondon it is situated between the preindividual components of our existence the transindividual relations that we enter into.

Muriel Combes has drawn out the implications of this remark in her book on Simondon, referring to the “intimacy of the common.” The common, the shared language, habits, and affects that make up the backdrop of our subjectivity, a common which exists only in and through social relations, transindividuality, is not something that we only experience in moments in collectivity, in the delusions and madness of crowds, but is always present. The reference to intimacy also underscores that what is common is not something that is exterior to our individuality, it is not some role that we play, but is constitutive. Thus, to draw the two remarks together, the eternal that we experience is perhaps the common, is the irreducible relational aspect of our existence.

Any reference to the connections between Spinoza and Simondon would be incomplete if it did not include the affects. For Simondon there is a distinction between affects and emotions, the echoes of which shows up in Deleuze’s writings: affects are preindividual, existing in a metastable state, while emotions are individuated, distinct. To have emotions is to determine both the object of one’s affections (or hatreds) and the subject, we are defined by our feelings. I realize that I muddled the distinction there for the sake of a pun, but it was also to make a point: Spinoza does not have a distinction between emotions and affects (it depends on what translation you use) but he does make a similar point. If one reads the various progressions of the affects through Part Three and Four of the Ethics, the way in which the initial joys and sorrows are extended to various objects and subject to the vacillations of time, then it becomes clear that this is the constitution of both an object, or a series of objects, and a subject of sorts. If one were to fill in the blanks as it were, move beyond the generic equations of love and hate, one would arrive at specific individual, within a specific community. For Simondon the identity of a community cannot be found at the level of action, too discontinuous, or representations, too large, but at the level of affects, a “structure of feeling” to use the old Raymond Williams phrase. It seems to me that such an idea runs through Spinoza’s reflections on the relation between superstition and the constitution of community. A collective or an individual is constituted by its affects, its desires hopes and fears.

Posted by unemployed negativity at 8:59 AM