Biographies Real and Imagined: On Peck and Barker 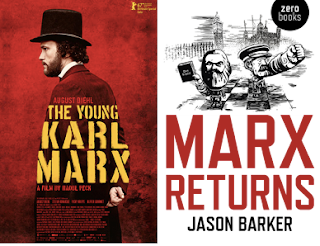 When I was in college I took a class on Contemporary Political Thought with Dana Villa. He would introduce every thinker, from Nietzsche to Foucault, with a few anecdotes told manly to amuse, stories of Adorno's meeting with Chaplin and the caricature of Lukács in Magic Mountain. Once the biographical gossip was dispensed with we could move onto discussing the text at hand. It is perhaps because of this that I have never been much interested in biography.

I have read a few of the necessary ones, but more out of due diligence than any faith in the insights of biography. It does not help that so many of the biographies that have appeared in recent (and no so recent years) have been hatchet jobs, book length ad hominem attacks. I am thinking specifically of James Miller's The Passion of Michel Foucault and Francis Wheen's Karl Marx. These books take Hegel's dictum that "no man is hero to his valet" as guideline rather than critique reducing philosophy to biography and biography to the most "scandalous" character flaws.


Two recent works on Marx attempt to escape this trend of biography as hit piece. I am referring to Raoul Peck's The Young Marx and Jason Barker's Marx Returns. Starting with Peck's film which it is notable and laudable in that it is a film. To make a film about Marx in this age is no small feet. As the title of Peck's film states, the film focuses on the young Marx, on the period between 1843 and 1848. From the period the film constructs a narrative in which the culminating event is the writing of The Communist Manifesto. The writing of the Manifesto is a culmination of the film's arc in which slogans and sentiments are replaced with concepts and analysis. At one point in the film Karl even complains about his intellectual and political circles, "Scribbles urging world revolution, devoid of ideas and concepts!" The attempt to focus on conceptual production, especially as it breaks Marx's writing out of both the polemics of French socialism and the "critical critics" of post-Hegelian philosophy gives an ironically Althusserian angle to a film on the young Marx.

This demand of the concept can be seen in two of the film's best scenes. In the first Karl and Jenny Marx explain to Proudhon that his slogan "Property is theft" contains an unexamined contradiction. That it is both Jenny and Karl that engage in this argument is interesting. The film not only includes Jenny Von Westphalen and Mary Burns in its narrative but the emphasis is less on gender relations and the occluded work of social reproduction necessary to produce capital as well as Capital than on the class tensions of these marriages.

In the second scene focusing on a concept, Marx explains to a bourgeois factory owner that it is not "society" that will collapse if capitalists cannot make a profit but the existing "relations of production," but even this scene despairs at defining the concept and what is at stake in it. The capitalist simply dismisses Marx by stating that such a concept sounds "Hebrew" to him. I am not sure if a viewer, especially one who had not read Marx before, would even understand what is at stake in such a concept. 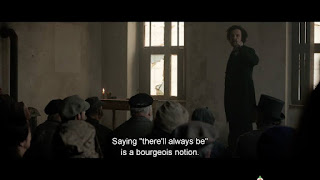 These are not the only scenes of conceptual clarification but these fragments indicate a tension within the film's narration of conceptual production. To paraphrase the often cited bit of screenwriting advice the film tells more than shows us what conceptual production looks like. There are more scenes of Marx talking about the importance of what he is trying to write and shots of book covers than scenes revealing what might be in those books, or why it is worth making a film about them. The film closes on some of the rousing passages from the Manifesto, showing their writing and printing, but it is dramatic polemic and not conceptual structure that is highlighted. It is both the culmination of the film's focus on concepts and ideas and its surrender of any possibility of putting those concepts to work in words or pictures.

Barker's book crosses the same terrain as Peck's film, drawing together biography, narrative, and ideas, but it does so in a way that actively embraces fiction. Baker draws from Marx's letters and life, but intersperses these "ripped from the archive" details with elements of his own design and aspects of Marx's philosophy constructing more of a historical novel than biography. All of the standard, and well known aspects of Marx's life in London are present, the obsession to finishing Capital, the carbuncles, and the dying kids, but they are shot to life with invented scenes and descriptions. Marx does not just contemplate the commodity form, but is confronted with its spectacle when he goes out to buy a toy train for Edgar. Trains become a recurring theme throughout the novel, appearing alternately as commodities, as moving trains, and as the locomotive of history; each appearance inflicted with its concept. An attentive reader of theory will find the allusions to Benjamin and Althusser in these passages.

Barker's creations can be understood as narrativizing concepts as well as conceptualizing narrative. The concept of labor power is illustrated as Marx and Helene discuss a sex worker they see outside the window of their London flat, clarifying what precisely is being sold and bought, and exploitation appears as both an elusive formula and a concrete condition. It is worth noting how much Barker fills his novel with the sights and sounds of nineteenth-century London in the midst of the industrial revolution; reminding us that if "the forming of the five senses is a labor of the entire history of the world down to the present" then some of that history is also a forgetting, as the brutality of exploitation has been sanitized and move out of sight.

I appreciated much of Barker's inventions, preferring them to a valet's search for the truth of Marx in this or that action or character flaw. A passage in which Marx gathers his family for the collective work of completing Capital, with Engels supplying the funds and the children, Jenny and Edgar, helping with the daily tasks of dodging bill collectors, what Marx calls "The communist factory for the purpose of abolishing the factory" stands out as both amusing and enlightening in terms of our own conditions of living and theoretical production. However, some of Barker's creations are lost on someone as uninterested in biography as I am. As I read a section on Jenny Westphalen's affair with a British officer I found myself wondering not only if this particular literary turn about was true but if I cared.

That is my final question in this the two hundredth anniversary of Marx's birth. What kind of biography do we need today? Of course it will be necessary to counter the hit pieces of the right which attempt to reduce all of Marxism to Marx's unemployment, infidelity, and inconsistencies, but that always seems like a rearguard action to me. Peck's film in particular seems like it wants to counter the claim that one should not take Marx seriously because he was drinking, arguing, troublemaker by arguing that we should take Marx seriously because he is a drinking, arguing, troublemaker. If the revolution is not for long nights of drinking and days on the beach then what is it for? Barker has larger stakes, reimagining Marx to place Marx in our imagination. However, in each case I wonder about the limits of the biopic and even biography as form.

Perhaps in a reversal of the oft repeated story of Marx declaring himself to not be a Marxist it is necessary to recognize how much of Marxism is irreducible to Marx, stressing not the transcendence of the man above the doctrine but the production of the doctrine beyond the man. It seems to me that it has always been more of a question of what the concepts do than who produced them: to take one contemporary example theorizing "social reproduction" is more interesting than returning to the miasma of Marx's home life. Or maybe I really just don't like biographies.

Posted by unemployed negativity at 8:21 AM