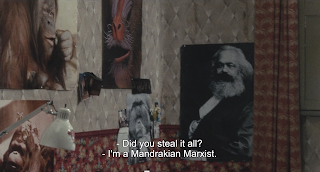 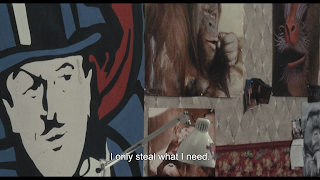 Images from Property is No Longer Theft

There is a line that I used to attribute to Roland Barthes, "those who do not reread are doomed to read the same book over and over again." I liked the riddle like nature of the phrase, and the way it seemed to posit a first read which is often a restating of one's already existence preconceptions, hence the rereading of the same book under different covers, against a rereading that discovers difference in repetition.

It turns out my memory was false terms of the letter, but perhaps not in terms of the general idea, even though Barthes original passage was less about rereading philosophy than literature. Here is what Barthes writes in S/Z:

"Rereading, an operation contrary to the commercial and ideological habits of our society, which would have us "throw away" the story once it has been consumed ("devoured"), so that we can then move on to another story, buy another book, and which is tolerated only in certain marginal categories of readers (children, old people, and professors), rereading is here suggested at the outset, for it alone saves the text from repetition (those who fail to reread are obliged to read the same story everywhere), multiplies it in its variety and its plurality: rereading draws the text out of its internal chronology ("this happens before or after that") and recaptures a mythic time (without before or after); it contests the claim which would have us believe that the first reading is a primary, naïve, phenomenal reading which we will only, afterwards, have to "explicate," to intellectualize (as if there were a beginning of reading, as if everything were not already read: there is no first reading, even if the text is concerned to give us that illusion by several operations of suspense, artifices more spectacular than persuasive); rereading is no longer consumption, but play (that play which is the return of the different).”

As a professor, to put myself in the three categories above, I reread a great deal. I generally reread all of my assigned readings. Sometimes I grateful for this, as I get to return to some of the texts that continue to provoke and inspire, returning to Marx, Hegel, Spinoza, Deleuze, etc., again and again. There are other times I am less grateful as I reread texts that work well in the classroom but do not do much to provoke thought. I also reread a great deal when writing. There are books outside of these two categories, books that I never get to teach because of either their difficulty or because they have not been translated that unfortunately and books I have not written on beyond a blogpost, which is nothing more than a document of that first reading. These books are definitely worth rereading, it is just hard to find the time and space for it.

Lately for various reasons I decided to reread Macherey's Petits Riens: Ornières et derives du quotidien. I had various reasons for doing so, not the least of which is the increasing cost of shipping books from Europe. I may have to start rereading a lot if I want to keep up with my French. More seriously the rereading has more to do with considering a larger project about Macherey and Balibar, even if such a project is a long way off.

That Macherey's book rewarded rereading goes without saying, but what I would like to write about here is the way that Macherey rereads one of the most reread philosophical relations, that of Hegel and Marx. Macherey's rereading begins from the place of labor in Hegel, focusing neither on the master/slave dialectic nor the discussion of the ethical role of labor in civil society in the Philosophy of Right. Macherey turns to a more general discussion of a logic of work in the encyclopedia logic. Work is illustrative of the very cunning of reason in that in work in order to realize my ends, produce something, I must necessarily surrender my mastery and control by subordinating my action to mechanical and chemical processes that exceed my intentions. I must use mechanical properties, blades and weights, as well as chemical processes such as fire. It is these processes, and not my mastery, that actually do my work for me, realizing my goals by acting entirely outside of them. Macherey cites the Encyclopia Logic on this point)

“Reason is as cunning as it is powerful. Cunning may be said to lie in the intermediative action which, while it permits the objects to follow their own bent and act upon one another till they waste away, and does not itself directly interfere in the process, is nevertheless only working out its own aims. With this explanation, Divine Providence may be said to stand to the world and its process in the capacity of absolute cunning. God lets men do as they please with their particular passions and interests; but the result is the accomplishment of-not their plans, but his, and these differ decidedly from the ends primarily sought by those whom he employs.”

(It is worth noting that Macherey's attention to the logic of work in Hegel, particularly the way in which it brings together the general logic of work, the theological or metaphysical problem of work, and its quotidian dimension, is very similar to his reading of operation and action in Spinoza. That is a matter for another essay).

Macherey is not alone in reading Hegel on this point. Marx cites the same passage from Hegel in the chapter of Capital dedicated to the labor process. As Marx describes this process, [The worker] makes use of the mechanical, physical and chemical properties of some substances in order to set them to work on other substances as instruments of his power, and accordance with his purposes."

As Macherey describes this ruse, or detournement, at the heart of the labor process:

"In the world, reason, in the strong sense of the word, works by insinuating itself through a ruse: all work in fact takes, as we have seen, the form of a ruse or a process of detouring [détournement] by which the subject achieves his freedom by exploiting the forms of necessity which determine the objective world."

If work remains the figure the general cunning of reason, the realization of ends by its subordination to means, as well as the figure of God's work in the world, then what does this mean for actual work. In the 1844 Manuscripts, the section titled "Critique of the Hegelian Philosophy and the Dialectic of a Whole" Marx writes "The only labor which Hegel knows and recognizes is abstractly mental labor." I think that this remark reveals an interesting tension in Hegel's thought, who constantly tries to recognize the reality of work, or labor, placing it at the center of his thought, but subordinates that recognition to an abstract and idealized form of labor. I am thinking not just of the work of the bondsman in the Phenomenology of Spirit which becomes the basis for ethical recognition, but also Hegel's remarks about the limits of mechanization of agricultural work, and, most importantly, the rabble. Whenever Hegel thinks of work, he thinks of in terms of the cunning of reason, of teleology realizing itself through necessity, failing to recognize other causal relations, and ultimately the overdetermination of work.

If we move from the general figure of the cunning of reason to the more specific figure of the proletariat, of the wage earner, the very logic of realizing one's ends by subordinating them to necessity takes on a very different meaning. The idea of realizing your goals, your intentions, by subordinating them to not just mechanical and chemical processes, but social processes as well, by subordinating yourself to the realities of the world, becomes no longer a figure of reason, of God's march in the world, but ideology, a justification of the world as it is. As Macherey writes:

"The wage earner is often subject to a cruel reality, most of all in periods of crises, and capable in all cases to be seen as an injustice, such that we do not see how we could reduce it to a form of exercising the power of reason, and this becomes a completely different interpretation, which radically shifts its content, as liberal ideology does by giving this fait accompli a legal sanction, insofar as it supposed to express the very law of history. "

To frame this in terms of Marx it is worth noting that Marx cites Hegel's statement about work being the cunning of reason in Chapter Seven of Capital on the labor process. The first part of that chapter is dedicated to considering the "labor process independently of any specific social formation." It is in this section that we get not only the schema of labor as the transformation of an object by a subject with an instrument (as schema that will be important of Althusser among others) but also the entire anthropological distinction separating the worst of architects from the best of bees (because there is an irreducible mental component to the former's work). However, this section is only a precursor to Marx's consideration of the valorization process, to the transformation that work undergoes when it becomes part of the capitalist search for surplus value. As I have argued elsewhere, this tendency culminates in the utter transformation of worker, from the worker annexing nature as an organ, "adding stature to himself in spite of the Bible to the worker being reduced to the conscious organ of the machine. What begins with promethean overtones ends in purgatory, as the valorization reduces the labor process to a means of the valorization process.

Macherey's book is on the problem of daily life, of how philosophy can comprehend the world in its actuality. The attempt to make daily life an object for philosophy risks idealizing that life not because it is disconnected from it, as in the standard criticism of idealism, but by rationalizing it. As Macherey writes:

"This is another way of saying that everyday life [vie quotidienne] poses a problem for philosophy, not just because it reveals the impossibility of comprehending the totality, but also because it puts in question the fundamental enterprise of a philosophy of reality, by placing itself at a distance from reality is this not denying daily life its own quality of reality, by bringing it down to a level where it reveals itself to be in conformity with the requirements of reason?"

In other words, any discussion of the labor process of work as an anthropological process of transformation of the world and self transformation without a consideration of the valorization process, of the reality of work in capital becomes nothing other than an ideological justification of the latter. This is another way to make sense of the famous eleventh thesis. It is not just that philosophers have only interpreted the world, failing to act, but that any interpretation that does not grasp the way that the world is already being transformed,  in the process of transforming, becomes nothing other than ideology.

Rereading Macherey reading Hegel and Marx thus poses a different way of understanding the whole division of idealism and materialism. Hegel's idealism is not to be found in some supposed detachment from the world, from dwelling with spirit and the idea, but from precisely the way in which he interpreted reality, including political economy and labor, to be realization of ideas. Posed this way the break with Hegel is nothing less than a break with philosophy, a transformation of philosophy, as Althusser wrote.

Posted by unemployed negativity at 1:12 PM