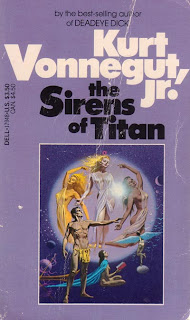 I have been trying to write something in honor of Kurt Vonnegut for some time now. While it has been awhile since I read his books, I poured through them in high school, and they were quite influential on my young impressionable mind. So in lieu of an actual post, I am going to post the following email that my father sent to my brother and I on the day of Vonnegut's death (which is fitting since most of the Vonnegut I read in high school were his old books).

I am sure that you have noted the death of Kurt Vonnegut. In my life he played a significant role in: (i) questioning the assumptions that are implicit in our daily lives; (ii) valuing our humanity and (iii) and the role of irony in maintaining some semblance of sanity. He addressed with considerable insight important themes in modern life:

3. Crimes committed in the “fight against evil”--Slaughterhouse Five

4. Perversion of science as a weapon--Cat’s Cradle

5. Then emptiness of entrepreneurialism--Breakfast of Champions

He has been dismissed as a comic outsider speaking only to the disaffected. However, I believe that he will be recognized as someone who illuminated modern culture and focused on important issues. The NY Times obituary is very good and I urge you to read it.

Unfortunately, as was evident in his more recent writing, he was unable to take comfort from his own insights and had given up on humanity. Regardless of the effects on him, I love his writing for its intelligence and humor and will miss him greatly.

Email ThisBlogThis!Share to TwitterShare to FacebookShare to Pinterest
Labels: Vonnegut

It was a great loss.