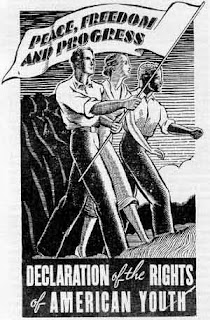 This semester I am co-teaching a class on “consumer society,” a class which is designed to inspire and provoke students to critically think about that which is most familiar to them. Already in a few short weeks the class has reinforced a realization that has begun to crystallize over the last few years of teaching. By and large students have no real problem with radical criticisms of the present order. I have taught Marx, Foucault, Negri, Goldman, etc. semester after semester, and generally students have no trouble accepting critiques of capital and the like. The thing is that they cannot imagine any connection between these critiques and their life or life in general. Furthermore they interpret the fact that I care about these things, believe in these criticisms, to be simply a testament to the fact that I do not live in the real world, but in the classroom. In the classroom it is perfectly acceptable to criticize capitalism, but in the real world one needs to find a decent job.

Of course I am generalizing, and not even in a profound manner. My point is this, if for decades the figure of the student was synonymous with social rebellion, with a ruthless criticism of everything existing, this may have less to do with theories than with a particular practice, a particular experience of living. Universities uproot students from their homes, from their familiar and entrenched place in a familial order, and place them in a context that is halfway between communism (collective living, eating, sleeping) and anarchism (the necessity of creating a social order ex nihilo, even if it is only with a roommate). On top of this there is all of the time, free from work and other demands; time to spend in clubs and social activities. There is something radical about student life, independent of the classroom. (In fact one of the things that critics of academia like David Horowitz can never explain, or even address, is the fact that the years that we associate with student activism, the tumultuous sixties, were years of relatively conservative teaching.)

It is this experience, this liminal space of freedom between home and job that is being destroyed. It is being destroyed by the cuts in funding to education. Students today, at least my students at a state university, work jobs, both on campus and off, and worry constantly about making ends meet. Many live at home, and have no time for clubs and student organizations, for practicing politics. They are all theory and no practice, and so theory appears to be lifeless and dead to them.

There is a fairly mediocre science fiction novel called Kampus by James Gunn. Most of it takes place in a futuristic extrapolation of a sixties college campus (Berkeley, I think), with permanent protest between students and administration; a college president who has been kidnapped so many times that he is replaced by an android; and so on. There is a scene in the novel when the main protagonist is on the run, hiding out at a community college/technical school. After a few days of observing the mind numbing conditions at the school, he decides to take action. He gives a rousing speech, imploring the students to rise up and demand freedom to think and live. The students rise up to attack him, however, worried that his disruptions will threaten their grades and job prospects. That is the university of the future, no androids needed.