In Body if not in Spirit: Butler and Malabou on Hegel 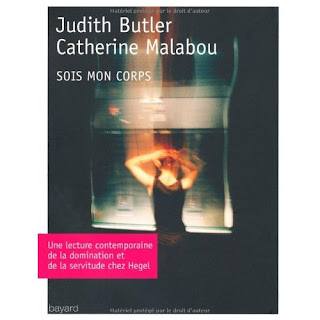 In the history of philosophy there are some texts that are difficult to say anything new about. These texts are so dominated by one influential reading that it becomes difficult, even impossible, to say interpret anew. Paradigmatic in these respects is the brief section of Hegel’s Phenomenology of Spirit known as the “master slave dialectic” or “lordship and bondage”.This section is so dominated by Kojeve’s canonical reading that is almost as if his words were already there on the pages of Hegel’s text.
This is one reason why Judith Butler and Catherine Malabou’s exchange on “Domination and Servitude” published in French as Sois mon corps: une lecture contemporaine de la domination et servitude chez Hegel is engaging. It is a reading of this all too well known section of Hegel’s text, but one that dispenses with the preoccupations of a previous generation in order to reread Hegel. Butler and Malabou each address Hegel from their particular philosophical commitments and engagements: Butler’s intervention is framed by her reading of Hegel in The Psychic Life of Power and Malabou continues her development of plasticity in her reading of Hegel. Which is not to say that the concerns of Kojeve are entirely absent. He is mentioned not just in name, but also in general orientation. His reading, which influenced Lacan, Bataille, etc., made this particular passage not just the genesis of self-consciousness, but an anthropogenesis, the constitution of the human as such.

In Butler’s reading in particular, this passage from animal to human becomes about attachment to the body. The title would translate into English as “Be my body,” which is the masters injunction to the slave. The slave will work and toil and the master will consume the fruits of the labor. It is worth noting, and this is something that comes up in both Butler and Malabou’s intervention, that Hegel does not speak of the body as such. Any attempt to comprehend “the body” would have to be framed by the discussion of “life” that precedes the section, and the intersections of fear, work, death, consumption, and consciousness that punctuate the passage. It is on this point, on their attempt to not just read the body, but read it through death, work, and fear, that Butler and Malabou’s intervention joins what Negri describes as a post-humanist anthropology.

Although it remains to be seen how post-humanist this anthropology is, how much it can work through the defining aspects of human existence, construed as practices and relations, without relying on a concept of the human, constituted as an essence. This problem is especially vexing given the role death, the fear, or death or finitude plays in this text, and Kojeve’s reading. Death in post-Heideggarian thought, functions as a kind of finite transcendence: it is finite, being death and all, but it avoids whether or not there might be other ways of figuring finitude and, more importantly, it functions as a kind transcendent condition, as that which exceeds and structures all experience. This is of course, Kojeve’s contribution to Hegel, of his radically interrupted reading that makes death the “absolute master,” failing to notice that it is not Hegel’s last word on finitude or negativity. This is both the challenge and the limit of their project: in some sense a post-humanist interpretation of “Domination and Servitude” is nearly impossible because it is precisely placing this section, with its drama of death, work, and desire, at the center of Hegel’s thought that constitutes the humanist reading.

Malabou and Butler both focus on the impossibility of actualizing the injunction, the separation of subjectivity from the body. The master still needs to eat, to consume, and is thus confronted by the very object that he sought to avoid. The same could be said of the slave’s encounter death: the slave flees death in the struggle for recognition only to find it again waiting, in the fear of the master. Complete detachment from the body is just as impossible as complete surrender to the demands of life, a purely animal existence, physicality and negativity, determination and intederminacy, are equally unavoidable aspects of human life. There is nothing terribly new to this reading, but it perhaps has the merit of avoiding “recognition” as its central concept.

Perhaps the most interesting aspect of Malabou and Butler’s confrontation is the way in which it pits their particular conceptual innovations, plasticity in the case of Malabou and subjection/attachment in the case of Butler, in relation to Hegel’s text. In each case the concept in question is developed in relation to Hegel’s thought, albeit differently. To start with Malabou’s reading of Butler, Malabou poses the question as to what extent Foucault’s problematic of subjectivity/subjection, especially once understood as an attachment and detachment to a particular kind of power differs from a dialectic, countering Butler’s Foucauldian reading of Hegel with a Hegelian reading of Foucault. The slave's subjection is nothing other than a kind of attachment, the attachment to simply living, to the body as given, and mastery is a kind of detachment, an active constitution of the self as something other than this particular life, this body.What makes this possible is her concept of plasticity, the capacity to give and receive form, which cuts through dialects and subjection/subjectivity, to think the interconnection of passivity and activity.

In the end plasticity, as the simultaneity of shaping and being shaped of consciousness, and performativity, as constraint and action, circle around the same fundamental problem: as Spinoza perhaps was the first to note, every finite thing, which is to say everything, is simultaneously determined and determining, affected by other things around it and striving to act on the world. Thinking the specific conjunction of these two aspects is to some extent the task of any materialist philosophy, which is to say any philosophy that is not hopelessly caught up in a metaphysics of freedom and freewill. Malabou and Butler’s argument about Hegel has the merit of putting some of these different concepts of servitude and mastery in relation, most notably Hegel and Foucault, but, despite itself, it also indicates the limit of a purely philosophical investigation. If Foucault’s problem of subjection, the fact that we are always saying yes and no to power, can itself be understood as a restaging of the dialectic of attachment and detachment that defines servitude and domination, then wouldn’t it be possible to say the same thing about performativity and plasticity? My point is not to confirm Foucault’s nightmare in which Hegel subsumes all attempts to escape his influence, but to pose the question of a reorientation of thought. Perhaps the task is not to conceptualize this relation, to rigorously isolate the point where passivity becomes activity, but to think the materiality and specificity of different ways in which one becomes the other. What is perhaps important is not the general dimension of the concept, but the specific modality of the encounter. This maybe the reason that Hegel’s little narrative draws us back again and again: it offers us not the general figure of negation but something of the specific contours of domination and struggle.
Posted by unemployed negativity at 2:37 PM

Hullo Jason, I was reading your review on Mute - very nice piece. And looking for your email address ...

You can reach me at
"the name of my blog"-at-gmail-(dot)-com.

Hello Jason
Any further thoughts on:"but to think the materiality and specificity of different ways in which one becomes the other." Or have you taken this up elsewhere? I think it hits on something crucial.

I am a late comer to your blog, and found it to be very interesting and compelling, although I have avoided later criticism such as Butler and Foucault until this semester. I was wondering what sorts of insights you would be willing to offer about the employment of allegory or parable by Hegel. I feel that the lord/bondsman (Herr/Knecht) is a rather difficult analogy that seems to obfuscate rather than elucidate. Any thoughts on how this particular allegory can actually be useful to understanding Hegel's dialectic? Is it a model of the dialectic?