One of the first texts that introduced me to the Italian political traditions of Operaismo and Autonomia was Italy: Autonomia, Post-Political Politics published by semiotext(e). I found my copy at Moe’s books in Berkeley, and for years it was the pride of my little library. This was years before it was reprinted. I would show it to friends, and offer to make copies at work for whoever was interested, my personal act of auto-reduction and sabotage. I poured over the writings of Negri, Tronti, Bifo, and Virno, struggling to make sense of concepts that would change me over years to come. At the end of this book there is a comic by B. Madaudo Melville, detailing the kidnapping of Aldo Moro. This was immediately legible, brought to life in slashes of ink that immediately suggested a tumultuous time with thick strokes of ink.
Semiotext(e) was a transitional publisher for me, connecting the world of anarchist zines with philosophy. The comic at the end of the issue on Italy added comics to bridge the gap. It brought together insurrection, imagination, and intellect, a difficult combination that is the foundation of revolution.
I am reminded of this story in reading Antonio Negri: Illustrated, Interview in Venice by Claudio Calia. It has the unique honor of being the second comic to detail the Italian Seventies to appear in English. It seems more accurate to trace its lineage to this early comic than to place it alongside the various Introducing [Blank] or [Blank] for Beginners comics which promise introductions to Foucault, Derrida, Baudrillard, etc. Those books are at best whimsical cliff notes, aimed at struggle students. Antonio Negri: Illustrated is more inspirational than pedagogical.
Antonio Negri is an illustrated interview. There are panels and pages dedicated to the hot autumn and “years of lead” with the requisite images of ski masks and prison cells, but most of the pages are dedicated to the interview itself. It opens with Claudio (the interviewer) finding Negri’s apartment in Venice and details the books and posters that decorate Negri’s walls as the two discuss the history and politics of autonomia.
At first I thought this was something of a waste of the medium. It was perhaps my vivid memory of the earlier comic that led me to expect pages and pages of meticulous illustrations of mass strikes and masses storming grocery stores and train cars. However, as I sat with the comic reading and rereading its pages, I warmed to its art and style. It conveyed a conversation in a way that a written text could not. You see not only the words but also the gestures, the offers of tea and the interrupting phone calls. This intimacy at the level of form is duplicated at the level of content as Negri tries to answer the most difficult question of all: how does revolution happen, how do revolutionary subjectivities emerge out of exploitation. 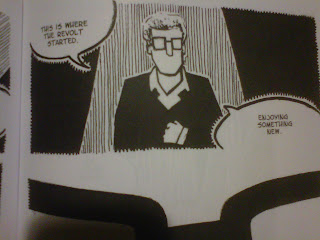 Negri's answer returns to the years of misery that followed the war, and traces the pleasure, the socialization in and against work, that begins to expand the imagination and the horizon of what is possible. As this pleasure confronts the force of exploitation it explodes into a movement. Perhaps one of Negri's most important concept is constituent power (potentia) the ontological, political, and economic affirmation of the creative power of desire, imagination, and labor as something which exists prior to, and in excessive of, its institutionalization or exploitation. This concept is articulated through The Savage Anomaly and Insurgencies. What Antonio Negri: Illustrated  sheds light on is the quotidian dimension of this concept, constituent power begins in the generosity of a conversation and an offer of tea. Negri's descriptions of the early years of Operaismo and the illustration of the conversation itself reminds me of the following passage from Marx.

When communist artisans associate with one another, theory, propaganda, etc., is their first end. But at the same time, as a result of this association, they acquire a new need – the need for society – and what appears as a means becomes an end. In this practical process the most splendid results are to be observed whenever French socialist workers are seen together. Such things as smoking, drinking, eating, etc., are no longer means of contact or means that bring them together. Association, society and conversation, which again has association as its end, are enough for them; the brotherhood of man is no mere phrase with them, but a fact of life, and the nobility of man shines upon us from their work-hardened bodies.

If I understand the project of Antonio Negri: Illustrated  correctly, it is an attempt to not only illustrate the formation of the needs and desires that the existing order cannot meet but to produce them as well. It is not the illustration of the thoughts of a Negri as much as it is an attempt to illustrate the moment where those thoughts become meaningful and important.
Posted by unemployed negativity at 9:26 PM

Email ThisBlogThis!Share to TwitterShare to FacebookShare to Pinterest
Labels: Marx, Me, Negri