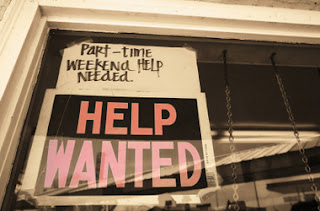 During my last few years of High School I worked at coffee shop, part time during the school year and full time during the summers. This job continued through the first few summers of college. My shifts were eight hours, from either six in the morning or three in the afternoon, with two fifteen minute breaks, and a half-hour lunch break. These shifts had the usual peaks and lulls that defined the food industry, mornings would begin with a rush of office workers ordering coffee and bran muffins and evenings would begin with people ordering coffee and desert before dissipating into a crowd of those too young to frequent bars as well as the late night writers, scribblers, and mumblers.

One evening a friend of mine was visiting town, just passing through for the night, and I was scheduled to work, which meant that I would not get out until after one in the morning, later if it was busy. I hatched a plan to see him anyway, and decided to convince my manager that it would be a good idea to let me punch out around nine in the evening, as the dessert crowd waned, and punch back in around midnight to close and clean-up. My rationale was that it was generally slow during the time that I would be gone. My plan worked, but only once. I was promptly told that I would not be allowed to negotiate my schedule in the future.

I was reminded of this minor little event when I read a recent story in the New York Times on the dominance of part-time work in retail, food service, and hospitality. Much of the article covers well trodden ground, detailing the shift from full time to part time work in many industries. However, what is remarkable, or at least new to me, is the technology that makes it possible to schedule the workers down to fifteen minute intervales.

"Technology is speeding this transformation. In the past, part-timers might work the same schedule of four- or five-hour shifts every week. But workers’ schedules have become far less predictable and stable. Many retailers now use sophisticated software that tracks the flow of customers, allowing managers to assign just enough employees to handle the anticipated demand.

“Many employers now schedule shifts as short as two or three hours, while historically they may have scheduled eight-hour shifts,” said David Ossip, founder of Dayforce, a producer of scheduling software used by chains like Aéropostale and Pier One Imports.

Some employers even ask workers to come in at the last minute, and the workers risk losing their jobs or being assigned fewer hours in the future if they are unavailable."

The article goes onto to detail how one chain in particular,  Jamba Juice inputs weather forecasts into their scheduling software, increasing staff on warmer days.

One way to read the connection between these developments and my anecdote, an anecdote that is symptomatic of many workers who struggle for more flexible time (and most for more important reasons than wanting to see a friend), is to see it as an instance of working class resistance preceding and prefiguring capitalist domination. The various demands for a more flexible work day, to make time for caring for children and parents, making it to auditions and appointments, precedes the new software and micro-scheduling. Of course the prefiguration takes on a very different form, the lighted backdrop to a darker figure, as this demand for the work to become flexible becomes a demand for the worker to become more flexible. To cite Hardt and Negri, "The power of the proletariat imposes limits on capital and not only determines the crisis but also dictates the terms and nature of the transformation. The proletariat actually invents the social and productive forms that capital will be forced to adopt in the future." Of course there is a twist in the prefiguration, as illustrated by the changing idea of flexibility, from flexible work to flexible (or docile) worker, a twist that raises questions about what sense it is prefigurative.

It is precisely these sorts of questions that lead Dardot, Laval, and Mouhoud, to label the autonomist hypothesis  "the invisible hand of communism," drawing parallels between the cunning of self interest and the cunning of resistance. Their criticism is a bit unfair, but the example above does raise questions about one of Hardt and Negri's central claims, that of the increasing autonomy of labor. They claim that as labor produces more and more social cooperation the command of capital becomes increasingly external to the productive force of labor, imposing itself only as command. Marx's assertion about the factory, that within it capitalist command is as essential as on the battlefield no longer applies to an increasingly immaterial and communicative labor force. The micro-scheduling of part-time workers according to the slightest variables of temperature and aptitude indicates however that there is always room for more command. Command, the capitalist control of the labor process is not indexed to social or technological conditions, the relations of production, but to the demand to extract more surplus value.

The Times' articles discussion of the technology also brings to mind Fredric Jameson's very different treatment of technology, specifically the technology at the center of Wal-mart in Valences of the Dialectic. Jameson cites all of the standard criticism of Wal-Mart, its massive size and power which it uses to reduce wages and reorganize production globally. Jameson goes onto enumerate Wal-Mart's innovations at the level of information, its ability to use the UPC code, computerized cash registers, and networks (not to mention containerization) to produce a kind of "real-time" inventory. (It is worth noting, in the days after Hurricane Sandy, that it is precisely the immediacy of inventory that made it possible for Wal-Mart to become a kind of model of privatized response to the last major hurricane.) Jameson is by no means making a pro-Wal-Mart argument, but raising, or repeating, what he sees as the fundamental point about dialectical critique. As Jameson writes,

"This dialectical character of the new reality Wal-Mart represents is also very much the source of the ambivalence universally felt about this business operation, whose capacity to reduce inflation and to hold down or even lower prices and make life affordable for the poorest American is also the very source of their poverty and the prime mover in the dissolution of American industrial productivity and the irrevocable destruction of the American small town. But this is the historically unique and dialectical development of capitalism itself as a system...The dialectic is an injunction to think the negative and the positive together at one and the same time, in the unity of a single thought, there where moralizing wants to have the luxury of condemning this evil without particularly imagining anything in its place."

I am roughly putting these two perspectives on capitalism together, not, as it might seem, to juxtapose the autonomist/insurrectionist against the more traditionally Marxist, "UPC codes plus soviets," but to raise a different point. The emphasis of the autonomist hypothesis, the demand to see the prefigurative resistance in everything, risks being entirely retrospective. Yes, it is possible to argue that there are struggles underlying flexible work, just as there are struggles underlying the entire shift from formal to real subsumption, but that does not change the fact that these struggles have altered capitalism, and it is still capitalism we are dealing with. Jameson offers not so much a corrective, but a necessary complement. It is as important to imagine the possibilities created by contemporary capitalism as it is to see the history of resistance embodied within.

Thus to return to our example above, the hyper-flexible work day, as important as it is to recollect the struggle for liberation from the standard work day that underlies it, it is also important to see the destruction of work that it makes possible. If employees can, through technologies that calculate needs and demands, be reduced to a few hours, then why can't the workday be reduced to a few hours for all. It is a matter of seeing the destruction of the working day in the ruthless pursuit to extract surplus value from every last minute of activity, as paradoxical (or dialectical) as that might sound.
Posted by unemployed negativity at 1:35 PM

You know, my German Intellectual History professor in college was a dyed in the wool socialist, but liked to poke fun at herd morality and the bourgeois fetish for democracy. He was a classicist as well and would point out that democracy was rule by "the demos", meaning those who live in their stomachs, the proles. This rubbed me the wrong way, but I found it difficult to argue why. It was weirdly anti-body for an otherwise avowed Nietzschean (he taught that too!).

In a similar way, I feel there's a weird anti-body echo in the praise of technology by some socialists. In the Soul of Man Under Socialism, Oscar Wilde ridicules the chump who says they enjoy doing some kind of menial labor. He is something of an extreme, but shows a reverse potential for fetishizing especially physical work (in terms of almost dainty-chivalric aversion rather than allure). Something feels missing in the politics of work when we lose sight of the work that remains and whose doing it. The digital-network revolution in communications, for example, was not merely built once and set into motion. It's constantly reproduced and revolutionized by living labor in East Asia. The desire to erase the worker as a social category anticipates that aspect of classless society, on the one hand, while producing strong reverberations of what Marx describes as "bourgeois socialism" in the Manifesto.

"The Socialistic bourgeois want all the advantages of modern social conditions without the struggles and dangers necessarily resulting therefrom. They desire the existing state of society, minus its revolutionary and disintegrating elements. They wish for a bourgeoisie without a proletariat. The bourgeoisie naturally conceives the world in which it is supreme to be the best; and bourgeois Socialism develops this comfortable conception into various more or less complete systems. In requiring the proletariat to carry out such a system, and thereby to march straightway into the social New Jerusalem, it but requires in reality, that the proletariat should remain within the bounds of existing society, but should cast away all its hateful ideas concerning the bourgeoisie."