Exceptions that Prove Rules: Lordon and Jaquet on Reproducton 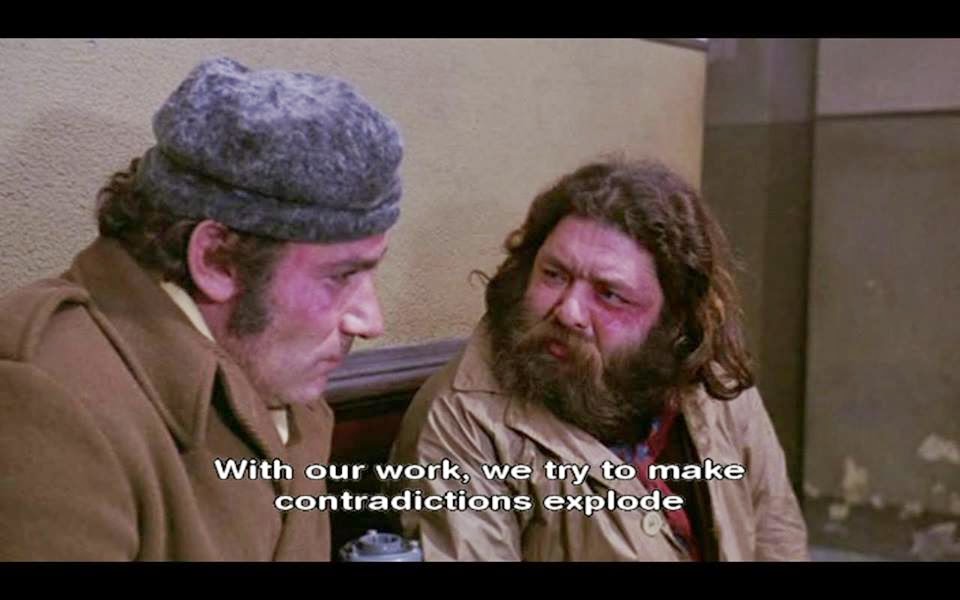 The Working Class Goes to Heaven

Years ago, during my final year of graduate school, I taught a class at SUNY Cortland called "Race, Class, and Gender," or something to that effect. It was a required course meant to teach kids from Long Island and upstate New York about the reality of racial domination, capitalist exploitation, and sexist oppression. One student who hated the class turned in a paper that was just a list of names, everyone from Oprah Winfrey to Ellen Degeneres; her point was that this list, a list of prominent African Americans, women, and gays and lesbians, proved that racism, sexism, and class did not exist. It was not even a paper, just a list, but it reflects a way of thinking that is all too common.
It is for this reason that Chantal Jaquet’s Les Transclasses offers a necessary corrective. Jaquet takes as her object precisely what is occluded from both sides of a certain ideological divide. On the one side there the various theorists of reproduction, from Althusser to Bourdieu, who examine the way in which social institutions from the school to the family necessarily reproduce the relations of production. Opposed to this there is a different discourse of not only a different political orientation, conservative or right, but of a different epistemological register, more anecdotal than theoretical, that asserts the non-reproduction of these relations through the stories of individuals of humble beginnings who have made it rich, or have otherwise crossed the divides of the racial or gendered order. Against this division, which posits non-reproduction as unthinkable, and one-side, and as the necessary truth of the power human agency, on the other, Jaquet argues that non-reproduction must be thought in its singularity.

To examine non-reproduction is not simply to note the singular anecdotes that constitute much of the discourse on non-reproduction. Nor is it enough to relate these singular occurrences back to such universals as ambition, hard work, and dedication, such are simply the modern versions of “so-called primitive accumulation,” narratives that justify rather than explain. Moreover, the spontaneous anthropology of contemporary capitalism constantly posits such characteristics as ambition twice: once as a generic quality defining humanity, and once as that which explains every exception, every transformation from rich to poor. If a few individuals manage to escape their class destiny, evading the structures and ideologies that kept them in their particular place, these singular cases must be explained not by turning to the so-called universals of ambition and hard work, but in an through the singular conflicts of different striving and affects. Non-reproduction must be thought in and in through the singular and overdetermined nature of the particular strivings, the particular complexion (ingenium) that defines not just each individual but their relation to their class. Class, and class reproduction, is as much a matter of particular tastes and desires, the things one can hope or aspire to, as it is access to wealth and knowledge. Of course non-reproduction must also be thought as a kind of reproduction. First, in that even in the non-reproduction of class identity, the working class kids who become computer designers or college professors, there is still a reproduction of the relations of production. The system needs professors (or at least used to) as much it needs manual laborers. Non-reproduction also reproduces the relations of production by functioning as their perpetual alibi and justification. The very fact that some, even if it is very few, crosses the lines of class, is the best justification for the system. Non-reproduction does a double duty, it distributes individuals from different classes and appearance of meritocracy functions as the ultimate alibi for the system. As Jaquet writes, Non-reproduction is the perpetual of reproduction by different means.”

It is at this point where it is possible to draw out the instructive tensions between Lordon and Jaquet’s particular use of Spinoza to conceptualize reproduction and non-reproduction in contemporary capitalism. This difference touches on the role of singularity, of individual difference, in contemporary capitalism. In La Société des Affects, Lordon augments the broad schematic differences of Fordism and neoliberalism of Willing Slaves of Capital by turning to two of the final propositions of Part Three of Ethics. Spinoza argues that there are as many loves and hates ‘as there are species of objects by which we are affected’ (EIIIP56) and ‘each affect of each individual differs from the affect of another as much as the essence of one from the essence of the other’ (EIIIP57). The multiple objects, and multiple strivings, constitute the basis for multiple affective compositions, each shifting and ambivalent as the same object is both the object of love and hate, and the same individual comes to hate what they once loved. Rereading these propositions back into the schematic history of different affective modes of production does not dispense with the latter, shattering it into a pure multiplicity where a thousand flowers bloom. Rather, these differences, variations of love and hate, must be understood as variations on a dominant theme, a dominant structure. As Lordon argues there will always be bosses who are kind and generous, work situations that engage a broader range of activity, but these differences and deviations are ultimately just different expressions of the same fundamental relation. The nicest boss in the world cannot fundamentally alter the fundamental structure of the Fordist or neoliberal labor conditions, the affective engagement at the level of individual intention does nothing to alter the basic relation with the activity and object. This affective veneer, the work of human relations, is not inconsequential: more than the role it plays in motivating individual workers, the real work it does it producing the appearance of difference, a society of individual actions rather the persistent structures. As Spinoza argues, we are more likely to hate or love an act that we consider to be free than one which is considered necessary (EIIIP49). On this last point Spinoza’s affective economy intersects with one of the central points of Marx’s critique of political economy, that of fetishism, which could in part be summed up as perceiving the capitalist mode of production as necessary and natural rather than the product of social relations. The affective economy of capitalism is one in which it is easier to become angry and grateful at the deviations, the cruel bosses and the benevolent philanthropists, while the structure itself, the fundamental relations of exploitation, are deemed too necessary, too natural, to merit indignation.

In contrast to this, Jaquet posits that at least during times lacking a large-scale revolution, the only way to think transformation is by following the individual deviations of non-reproduction. Finding in these individual differences not the reservoir of some supposed faculty of will or resistance, but the singular points of conflict and antagonism of different affective and imaginative compositions. Non-reproduction reminds us that the existing affective composition of society is as much undetermined as overdetermined, to use Althusser’s terms, or, as Citton argues, that the affective composition of society is necessarily metastable. The different loves and determinations of striving constitute points of tension as much reproduction. There is always a schism between ideology and experience, and even the different affective orders are in conflict with each other. Fordist dreams of security and consumption linger long into neoliberalism. Affects too are subject to uneven and incomplete composition, and this unevenness defines both their discord and their order.

For Lordon, individual difference functions as capitalism greatest alibi, as long as we remain at the level of individual differences, of the differences between bosses and corporations, we fail to constitute the affective opposition and effective knowledge to transform it. Singularity and difference obscures the systematic nature of the reproduction of the mode of production. In contrast to this Jaquet posits a demand to see in the singularity of trajectories not so much evidence of the absence of determination but the complex and conflictual overdetermination of the affective (and imaginative) reproduction of social relations. Non-reproduction is the condition of transformation. These different perspectives can be reconciled by returning to Spinoza’s theory of knowledge. The singular instances that Lordon critiques are those of the first kind of knowledge, the natural order of encounters—a natural order that Citton reminds us is sustained and maintained by an imaginary of individualism—while the singular cases of non-reproduction that Jaquet explores demands the third kind of knowledge, a knowledge of the way in which singular instances of non-reproduction are nothing other than the complex metastability of the multiple aspects of reproduction. The first is the exception that reinforces the overall rule of reproduction, while the second is the non-reproduction that makes possible its transformation.

Part of a paper titled "Affective Reproduction: Marx and Spinoza" presented as a keynote at the Depaul Graduate Student Conference.
Posted by unemployed negativity at 10:44 PM