It is the Symbolism, Stupid: Trump and Sanders 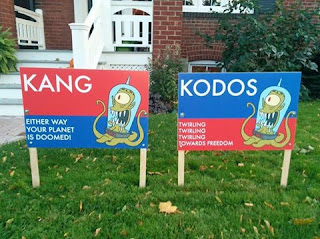 There is a certain similarity in criticism of Sanders and Trump. I am not referring to the symmetry posited by pundits of the radical center for who every left has an equal and opposite right--the tea party and Occupy Wall Street, Fox News and CNN, Iron Man and Captain America, but to a criticism offered by those far from the radical center that argue that Trump and Sanders are not the outside of the existing political spectrum. Trump's supposedly outlandish promises to deport millions of undocumented workers is not that different from existing policy. Sander's socialism is just what a previous generation would have called a new deal democrat, or what the rest of the world calls "center-left".


These criticism seem true to me, but they miss one fundamental point and that is the nature of symbolism itself. Trump may have the same immigration policy as Obama, the same position on the war on terror as well everyone, etc. Where Trump differs is precisely in what he is willing to say. What is unstated, left to the margins of the newspapers, becomes not just explicitly stated but bragged about. To put it in Zizek's terms, with Trump the obscene underside of power, the brutality of Abu Ghraib, the racism of the police, the cruelty of economic policy, comes out into the light. This is not the chilling aspect of Trump, however, the truly chilling aspect of Trump are the stories of High School students taunting minorities with the words "Trump" and "Build a Wall". If Trump is a fascist,  and I am not saying he is, he is perhaps better understood in terms of the micro-politics of fascism, in which it is less about specifically policy than attitudes and affects--a swaggering masculinity, a contempt for "losers" of any sort, and a profound sense of nostalgia for a past that must be restored. So yes, at the level of policy (to the extent that he has any) Trump might be more of the same, but at the level of what is uttered, he is quite different. This does not necessarily mean doom and gloom. Trump is the absolute non-neutrality of the state, siding unequivocally with capital against workers, whites against nonwhites, native born against others. There is no secret about this, hence the protests that have met his motorcades all over the country. If you wanted to believe that history advances by its bad side then Trump might be your man. Accelerationism with a spray tan face.

Where does this leave Sanders? I do think that there is something to his insistence on the word "socialism" and even "political revolution," even if they are not accurate descriptors of his platform. I too have read the often cited polls and anecdotes about millennials responding favorably to the word "socialism and negatively to the word "capitalism."Here the symbols are ambiguous. It is not clear what is meant by these words, or how they are understood. What is perhaps clear is a strong sense of opposition to the present order, however, inchoate, and a desire for something better. As with Trump, I think it is necessary to stress the symbolic nature of this opposition, and its symbolic nature. Sanders sometimes seems to be less a person than a series of memes and viral videos, from Black Lives Matter and Killer Mike to little birds and the environment, with little sense of what holds them together.

Lastly, let us not forget that these words, symbols, and attitudes, with their metastable articulation, and different possible futures, are, at least at this moment, attach to specific individuals. They are captured by celebrity which is the cult of personality lite, its diffuse version. The celebrity form is an apparatus of capture.

So yes, Trump and Sanders, are not that different from politics as usual, and will be even less so as the election draws near, but the merely symbolic difference, the difference of words spoken and not spoken, of even attitudes and affects, is not nothing, nor is it just a smokescreen. It is an opening for new forces and new transformations, or at least the possibility of such an opening.
Posted by unemployed negativity at 10:31 PM

" [of Sanders] with little sense of what holds them together." The author fails to realize that it is the pursuit of Justice and the anger at the establishment politics what "hold them together". Near sighted article focusing of symbols instead of the real pains and suffering of millions of american citizens (with no access to healthcare, with polluted water supplies, left jobless by outsourcing, etc.). The Republican vs. Democrat theatre (both parties are mainly backed by the same corporate interests and they act accordingly, fiscal deregulation, low taxes and subsidies for the wealthiest) is a farse. Sanders is different from politics as usual because he puts the wellbeing of the people above profits, consistently calls for public funding of elections, facing Climate Change with the urgency of a total war, jailing the bankers responsible 2008, etc. Even if he is not far left he is an independent and far, far from "politics as usual."

A cogent post. My concern is that Trump, if elected President, might open up space for a general repression of the Left. He (hopefully) won't foster it, in a direct, assertive way, but he might open space for it to be okay, with his "attitude" and "affects".