Make Monsters Great Again: Timeliness and Untimeliness in The Shape of Water 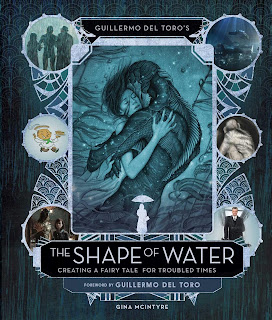 Guillermo Del Toro's The Shape of Water is an odd and improbable creature, a monster movie that is a critical darling. The critical responses for the movie have themselves understood the movie as a different sort of chimera, a combination of "fairy tale" and nostalgia film, something at once timeless and caught in its own relation to a vanishing past.


The film's initial voice over introduces it as a fairy tale, identifying the requisite elements of a princess and a monster, while the initial visuals saturate the screen with an excess of period details. It is hard to think of something from the period of the early sixties, from civil rights strife to cars with tail fins, that is missing from the film. It is more accurate to say that the film is supersaturated with period details, so much so that they become dreamlike and fantastical in their own right. Its sixties is a past that is invoked but never lived.


As much as the film makes reference to the pop culture of its era, from Mr. Ed to big band jazz records, the one thing conspicuously absent is cold war era science fiction and horror. These things structure the film but are not invoked in it. Few have remarked how faithful the movie actually is to The Creature from the Black Lagoon films. Not just the original film, which is nodded to in a reference to the creature being captured from South America, but the sequels Revenge of the Creature and The Creature Walks Among Us.  In the first sequel the creature is brought to an aquarium to be studied and put on display while in the second sequel the creature becomes subject to a series of brutal experiments meant to forcefully make it more human. In general the overall logic of the films is that the creature becomes more sympathetic as humanity becomes more and more brutal in their exploitation of the creature. This is especially true of the seldom seen final film, The Creature Walks Among Us,  which ends with a tortured and mutilated creature, stripped of its gills, walking back into the sea. It will surely die, but at least it is safe from mankind. In era of reboots, sequels, and reimaginings The Shape of Water is odd creature, the lauded picture by an award winning director that is a more faithful heir to its original than most of the attempts to cash in on cinematic precursors. 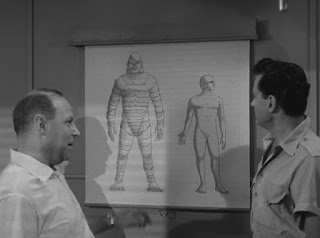 In The Shape of Water Eliza (Sally Hawkins) a mute cleaning lady of a secret government facility conspires with her African American coworker (Octavia Spencer), her gay neighbor (Richard Jenkins), and a Soviet Spy (Michael Stuhlbarg) to release an amphibious gill man held in a government lab. On the surface this film could be read as a group of outcasts and misfits working together to free a misunderstood monster: a Pixar film with more sex and blood. On this reading it is worth noting that the film's aesthetic of nostalgia (or aesthetic of nostalgia) the beautiful scenes of old neon light movie houses and classic cars is undercut by a kind of anti-nostalgia at the political level, television clips and snippets of radio underscore the brutal conflict over civil rights and, more to the point, the narrative of the film underscores the overt racism, sexism, and homophobia of the era. Of course it is possible to argue that these scenes are part of a "nostalgia for nostalgia," a recognition that the past is a nice place to visit through its various aesthetic mediations but you wouldn't want to live there.

Drawing together the movies B movie sources and its narrative makes it possible to read the film differently. The various characters assembled together are not just outcasts, oppressed, but are also exploited. Eliza and Zelda work as a cleaners in the government facility, doing the invisible work of cleaning the toilets and mopping up the blood (when experiments get out of hand). Their invisible and thankless care and maintenance work continues at home in the "second shift" as they prepare meals for husbands and neighbors. Richard Jenkins' Giles (the neighbor) is an advertising illustrator who is not only marginalized in his career because of his sexuality, it is implied, but is also rendered useless by the rise of photography. The soviet spy also finds himself expendable despite his dedication to his motherland and science. Even the villain of the film, played by Michael Shannon at his "Michael Shannonist"(all righteous anger and hypocrisy), finds that his years of dedication to government matters very little in light of his loss of the "asset" (the creature). This leads to one of the best references to the film's cold war setting. Shannon's character stresses his years of "decency" when talking to his commanding officer. The general explains that "decency" of the picket fence, family man, and cadillac type is an export product, projected abroad as part of America's ideological image because it is not used at home. 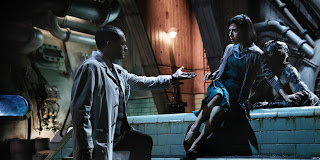 That these characters are linked in being exploited, expendable, and used up by various institutions is reinforced by one last detail about the creature. The creature is understood to be useful in the space race, as one character puts it, "it is our space dog:" its ability to survive in multiple environments is seen as the key to catapulting the US into the harsh environment of space. The anatomy of the gill man unlocks the riddle of the space man. It is for this reason that the creature must be immediately vivisected and documented. It is latter revealed that the creature has more to offer than its unique respiratory system. In the rush to exploit, to render the creature useful, the scientists overlook its true power. Or, to use the terms of Raj Patel and Jason W. Moore, even when it comes to monsters cheap nature comes at a cost. It is possible to argue that this the ultimate lesson of the film's fairy tale, a timeless lesson that exceeds period or place: exploitation not only uses one up, wears one down, but , more importantly, as much as it seems to use everything one is it also alienates one from everything they could be. Alienation is the necessary corollary of exploitation.

Monsters of the world, Unite! You have nothing to lose but your chains.
Posted by unemployed negativity at 11:35 AM