Must Love Dogs: Animals and Racism in the Age of Trump 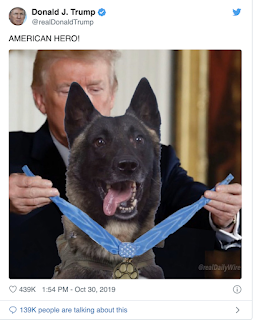 Trump is not a dog person, or, for that matter, a cat person. He is supposedly the first president in a century to not have a pet. Past presidents have had dogs, cats, horses, even alligators. While many animal lovers breathe a sigh of relief at such news it has recently taken a strange turn. After a long history of resorting to dog as his favorite phrase of contempt, he tweeted praise of a Belgian Malinois named Conan used in the raid on Abu Bakr al-Baghdadi. Even going so far as to retweet a doctored picture of him giving the medal of honor to the animal, adding that the real dog will be visiting the White House soon.

As if this shift from dog hater to dog lover was not stunning enough, Trump claimed that al-Baghdadi spent his last moments "whimpering and crying like a dog." A story that seems to be as invented as the photo of Trump pinning a medal on the "good boy." We could decry both of these as fake news, but they demonstrate how much Trump understands the affective logic of fake news. Stories work if they invoke existing scripts of cowardly villains and noble dogs. Trump's new found love of dogs could in some way be an attempt to drum up support after being booed at the World Series. What does America love more than baseball? More than the fabricated nature of both of these stories and their emotional appeal it is this simultaneous veneration of a dog  as a hero and the denigration of a human as a dog that provokes thought. How can the dog be both an object of praise and a term of abuse? Such a question returns us to the center of contemporary reflections on philosophical anthropology, of the distinction between human and animal, but also the divisions within and among humans.

“no definition of the human as such, or the “position of man in the universe could ever be attempted which did not include the infinite process of demarcation between the human, the more-than-human, and the less than human, and the reflection of these two limits within the imaginary boundaries of the human “species.”

Or, to put it differently, some dogs are seen as more than human and some humans are seen as less than dogs. Chamayou offers a historical explanation for this anthropological problem. As Chamayou argues maintaining a racial order is often outsourced to either outsiders, the use of former slaves as slave hunters, dogs, or, ultimately drones. The use of a non-human hunter short circuits any master-slave dialectic, and its eventual overcoming. As he does.

To refer back to Trump's new love of dogs, this may in part explain why he celebrates the dog and not the soldiers that carried out the raid. To do the latter would be to acknowledge the minimal equality that war or conflict entails--recognition in the struggle to risk one's life, as Hegel would put it. You cannot engage an enemy in battle if you are unable to acknowledge their intelligence and strength--to in some sense sense see them as human. To be killed, or caught by a dog, is to whimper like a dog, to be beneath the realm of human struggle. The contradiction is not a contradiction at all. In order for some people to be seen as less the human some animals need to be elevated the status of human, or even more than human. Twitter in its all of its pithiness has a different version of all of this in the often quotes phrase "White people love dogs more than they love black people."

I have to admit that as a dog lover, nominal "white person," and anti-racist that when I first read that tweet I was prompted to the usual reactions of defensiveness that is endemic to social media. Luckily I stopped myself before tweeting "Not all white people." Upon further reflection, and returning to the anthropological distinctions above, it is possible to say that division of man from animal intersect with, and reproduce, divisions within humanity. Anyone attempting to address either, to confront racism or speciesism, without examining their intersection risks reproducing one aspect of this order while confronting the other. Case in point PETA's (always an easy target for how not to do things) infamous "Animal Cruelty is Slavery" campaign.

Two conclusions. First, I intend to think more about this issue, and for this reason I recently ordered Bénédict Boisseron's Afro-Dog: Blackness and the Animal Question.  A book I only know about from Lewis Gordon's column on it.  There is obviously more work to be done to untangle the knot of intertwined racism, imperialism, and speciesism. I think that every white person, and every white person who loves dogs, must necessarily do this in order to avoid playing a horrible part in a script that is written for us.

Second, and just to get the image of Trump and the dog out of my head, and to make the point that there is more to dog loving than supporting the racist order, I would argue that what some people love in and through dogs is something even utopian, the care, generosity, play, and devotion of dogs is a glimpse of another relation to species and perhaps even different relations amongst humans. Dogs are not just parts in the script of denigrating the humanity of others they can also help us write a different story, one based more on empathy than conflict. Or, to end what is nothing more than a reflection on a series of tweets with a tweet. I will end with Eve Ewing's tweet about Hatty the emotional support dog. 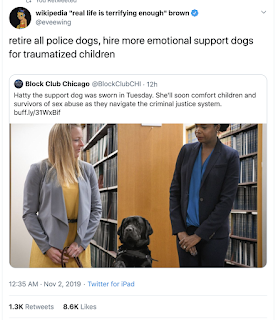 Posted by unemployed negativity at 1:00 PM