The Secrets of Aikido: Or, how to love something which does not love you back

For well over the past year I have been studying Aikido. I like it, somedays I even love it, but I cannot say that I am good at it. Of course that is perhaps the wrong attitude to have. I have gotten better at it, slowly.

My inability interests me, in part because I feel like I am confronting some of my basic limitations. The fundamental aspects of Aikido are: a) posture b) centering c)maintaining a relaxed attitude. Years of reading books and sitting at computers (like this one) have left me with a hunched posture like someone who rings the bells in a French Cathedral. And as for a relaxed attitude, I flinch if the water pressure in the shower comes on too strong, and I might even scream a bit. In Aikido I have to learn to relax while being punched at and thrown through the air. I know that I am a bit high strung, and tend to over react to everything, car repairs, bills, not to mention water pressure. So I feel that if I can coolly and calmly react to someone trying to hit me or stab me with a wooden knife (if is practice after all) I can take on all of these daily tensions. 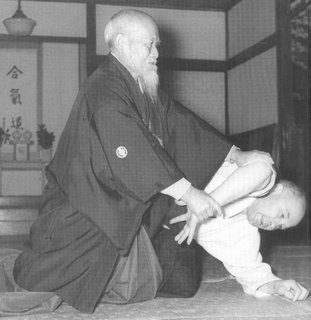 I have read a little of the philosophy of aikido and I understand and more or less agree with its basic principles, however, my appreciation of it philosophically comes not from the writings of Ueshiba (pictured above), but from Spinoza. (I have to confess something of an aversion to Eastern Philosophy. Well not Eastern Philosophy itself, but the whole Quasi-Hippy-Orientalizing-Spiritual-enlightenment-From-Those-Inscrutably-Wise-Asians thing which usually comes from people who are interested in Eastern Philosophy.) As Spinoza famously writes, "...No one has yet determined what the body can do, that is, experience has not yet taught anyone what the body can do from the laws of Nature alone..."(EIIIP2S). Now, I have always appreciated this quote, like a good reader of Deleuze, however, I must admit that I never really understood it until I tried to throw someone twice my size or perform a backward roll from standing.

What I have learned from Aikido is pretty basic: the only way to overcome a more powerful force is to blend with it, and most of all, keep breathing and moving, no matter what happens.
Posted by unemployed negativity at 6:38 PM

Email ThisBlogThis!Share to TwitterShare to FacebookShare to Pinterest
Labels: Me, Spinoza

There's an anarchist dojo in Oakland where i have thought that i would like to "learn" aikido.

i'm sorry that such a lovely spinoza quotation was used as the title of that class..