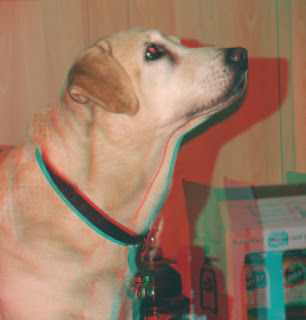 If you have the glasses I believe this picture will be in 3-D. I would have made the entire post in 3D, but who really wants a buch of words jumping out at them?


As I stated in a previous post, I consider Badiou and Rancière’s work on "the axiom of equality" as well as Negri and Virno’s work on “the commons” to be important aspects for a renewal of communist thought. (I could also say the same for Balibar’s work on equaliberty.) Communist, and not Marxist, first, because as it has been documented Marx had little to say about communism, and second, because it is less a matter of citation of textual authority than drawing out the logics of political practice. Finally, such works deal with the axiom or the ideal that one struggles for, rather than what one struggles against: elaborating a theory of communism rather than furthering the critique of capital.

So, how to define the commons? In one of Negri’s latest books, published in French as Fabrique de porcelaine: pour une nouvelle grammaire du politique, the common is defined through the old problem of the relation between public and private. As Negri states, following arguments that are as old as Marx’s writing, capitalist appropriation is always private while its form, that of contractual law, is public, defined by the state. Capital is thus neither public nor private, it is what Marx refers to as a “social power.” The liminal position of capital only increases as it appropriates not only the physical aspects of labor but language, science, and social knowledge, what Marx calls he “general intellect.” The common must thus be thought as the inverse of capital, occupying the same liminal space. It is neither public nor private, collective nor individual, but the ground through which such distinctions are made.

Three things make this argument interesting. One, as it takes as its starting point the contradictions within capital itself. This is a departure from some of Negri’s definitions of the common, which are often excessively celebratory. Secondly, in that Negri writes of the emergence of the common from the transformation of capital, it stresses the fact that Negri’s understanding of the common has little to do with a nostalgia for “the commons” for pre-capitalist relations of shared use. Capital is criticized from the future it makes possible not the past that it destroys. Finally, it draws out one of the strengths of the concept of the common and that is ambiguous or liminal nature. This comes out must strongly in the work of Paolo Virno, for whom the common (or the multitude, a term which is thoroughly intertwined with the meaning of the former), is situated at a point of indistinction between collective and individual; public and private; work and action (to use Arendt’s categories).

This last point is perhaps the most important, the common is not the collective, nor is it any term, such as society that could be understood to stand above or beyond the individual. The idea of the common is inseparable from rethinking these oppositions from the perspective of “the production of subjectivity.” As Negri and Hardt write in Multitude “Subjectivity, in other words, is produced through cooperation and communication and, in turn, this produced subjectivity itself produces new forms of cooperation and communication, which in turn produce new subjectivity, and so forth.” The concept of the common is inseparable from a new thought of subjectivity one that moves beyond the opposition of individual and collective. The very things that individuate us, a manner of thinking, speaking, inhabiting the world, are drawn from the common, and the common does not exist outside these acts of individuation. The common produces subjectivity and subjectivity produces the common. To quote Negri once again, “It follows that subjectivity is not something interior placed before an ‘exterior’ that we define as language; on the contrary, like language it is another mode of common being and nothing more.”

To return to the theme of this series of posts, the communism of Badiou and Negri, this insistence on the intersection of the common and the production of subjectivity is based on very different grounds than the former’s axioms of equality. In Badiou’s case (as well as that of Rancière) it is a matter of communism based on the axiom, or invariant of equality. Equality is an axiom, and a prescription, a here and now insistence, indexed only to the generic equality of thought. While in Negri’s thought (and in post-operaismo) it is a matter of a communism of the common, a communism of the production of the common, in which capital’s subsumption of the capacitites for language, knowledge, and desires, produces a common ensemble of capacities, the conditions for not only he creation of wealth, but also the transformation of society.

There are very different philosophical anthropologies underlying these two concepts. In the first it is the matter of isolating a generic invariant, thought or speech as that which precedes and exceeds the hierarchies and classifications of any social order. While in the second, it is a matter of locating the historical nexus of productive capacities that defines the common. The risk of the first approach, the axiom of equality, is that it overlooks the actual divisions and mutations of thought and speech that are produced through historical structures. While the latter carries with it all of the baggage of any historicism; just look at all of problems and debates surrounding the attempt to identify the present through the concepts of “immaterial labor” and “real subsumption.” The strength of both these perspectives, and the debate that opens up between them, is that they foreground the idea of a different account of the social order and the human subject, against the consensus that locates a self interested individual at the basis of all of history, and any social order.

Posted by unemployed negativity at 11:04 PM