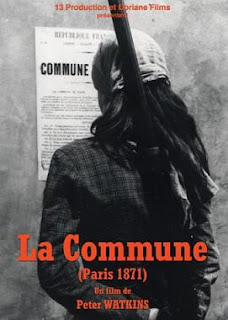 I had heard about this six hour film about the Paris Commune, but for some reason I was under the mistaken impression that it was a film by Chris Marker. I am not sure why I thought that, other than the fact that Chris Marker is one of the few directors who I could imagine making a six hour film about the Paris Commune. Anyway, it certainly was not the sort of film that I would have expected to find at my local video store. Don't get me wrong it is a very good video store, a great one in fact, but even they cannot work miracles. They do not have much Chris Marker, for example, and whenever I ask about Europa '51, they calmly point out that it does not exist in any format.

So, I was pleasantly surprised to stumble across La Commune (de Paris, 1871) at the video store the other day. I was wandering through the video store looking for something to complete my rent one get one free deal on "Thrifty Thursday" (my primary choice was Fay Grim, a total disappointment) when it just sort of jumped out at me. Even as I rented it, I was not sure that I would have the energy to watch a film that long. I found it utterly compeling, however, a real joy.

The film was made with primarily amateur actors, filmed entirely in a large warehouse, minimally redecorated to suggest the alleys and cafés of nineteenth century Paris. I know that those do not sound like selling points, but they are. The movie is made of equal parts documentary verisimilitude and anachronism; the action is punctuated by texts that detail the events of the commune, while at the same time part of the narrative is told by TV Newscasts on the competing networks "Versailles TV" and "Commune TV." Reporters from "Commune TV" debate the role of censorship in the revolution, while the talking heads on "Versailles TV" dismisses the commune as the product of a few foreign agitators. The combination of fact and fiction really pays off in the final hours of the film, as scenes of actors in character debating the actions of the commune and its various committee and decrees are spliced together with scenes of the same actors, now out of character, discussing the meaning of the commune and revolution to day. As the text linked to above, and the documentary included with the film, indicate the making of this film was for many of the people involved a life changing experience. So much so that many of them continued to meet and act in the spirit of the commune. In the end the film convinces you that this is the only way to make a film of the commune. The only way to represent collective action is through collective action.

So, I am curious if anyone has seen this, or any of Peter Watkins other films, or has thoughts.

I haven't seen La Commune, but now I am intrigued. It will have to wait since I stopped my netflix subscription--they must have it, no? But wht was Fay Grim a disappoitment? While it is not consistent with the latest wave of Hal Hartley's, it is unique in its depiction of positionalities and reversal of "bad" characters. There is something interesting about the plot, especially at the end, where the Odyssey of Fay Grim seems as futile as the trajectory of Henry Fool--who is depicted as "The Quiet American" of sorts. The sheer nonsense of the espionnage and counter-terrorism characters also paints the futility of ascribing good intentions to any actors in a "war on terror"--where the agents themselves are the terrorists, while the so-called terorrists are stoic and demure ... What the movie focuses on is on how "secrets" (as carrying informational power) are what this is all about and how the control of "knowledge" is the business of what should be called "terror" but is instead fetishized as "espionnage". I may be completely off--and there is so much more to the movie, as always, but...

Once again you have managed to get more out of a film than I have. My disappointment comes out being such a huge fan of early Hartley, "Surviving Desire," "Trust," "Simple Men," etc. Several weeks ago I watched the short films collected on the DVD with "Surviving Desire," and in my view "Fay Grim" paled in comparison.