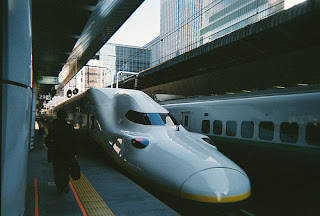 Roland Barthes supposedly wrote “Those who do not reread are doomed to read the same thing over and over again.” I have always liked this quote, even if I never took the trouble to verify that he ever wrote it, or what its exact wording is, for that matter. What I like about this sentence, which was relayed to me at some point, is that it says something about the fundamental inaccuracy of first reads, first impressions, which are nothing more than our initial prejudices and preconceptions. I think that this is true of reading, especially students who excel at finding themselves in everything they read no matter how hostile it is to their neoliberal ideology, but I also think it is true or experience, or at least travel.

I recently returned from Japan, which I visited for the first time. During my trip, which was part academic conference and part tourist excursion, I tried to see Japan, to understand something about the culture and people; you know all of the reasons that we are supposed to travel and see the world. The search took a myriad of random forms: everything from just walking around, to conversations with locals and academics who study Japan, to explorations assisted by those hallowed tomes of brief excursions, Rough Guide and Time Out. However, I felt that my search for some kind of knowledge was thwarted at every turn. Of course I picked up some trivia and bits of knowledge: I now have a working knowledge of the basic geography of Tokyo; some understanding of its subway system; and have some awareness of such cultural peculiarities as the cold mask, love hotel, Shinto, host/hostess club, toilet slippers, Christmas cakes, and the fashions of Tokyo. Most of the impressions that I came with, however, are nothing but confirmations of all of the things that one expects to find in Japan: the people were polite but reserved, the city was crowded and efficient, and so on. Whatever I was looking for, whatever exceeds the pages of a tourist guide, eluded me.

I did learn a few things about myself, however. First of all I should say that with the exception of a few hours listening to language tapes and a few years studying aikido, I know absolutely no Japanese; so I am only able to say things like “please,” “do you speak English?” and “two handed wrist grab.” I have never been more lost, linguistically speaking, than in Japan. In Tokyo this does not matter much; most signs are in English and Japanese, and even the subway announces stops in a polite English accent (like the computer in a sci-fi movie). Outside the city, however, one can get lost real quick, and I found myself playing "memorize the kanji" desperately trying to learn the characters for things like men's bathroom and the town I was trying to find. This language difficulty hit me the hardest when it comes to finding out about the world. Without a laptop, a paper, or a radio station to listen to, I went into serious news withdrawal. Lesson one: I am more of a news junky than I would like to admit. As much as I criticize and even despise "The New York Times" and NPR, I need them like an addict needs whatever substance he or she is addicted to. Second, despite everything I heard about distrust of foreigners, especially in more rural areas, I wanted to believe that the polite and enthusiastic way that I asked "Excuse me do you speak English?" (in Japanese) made me some kind an exception. I truly believed that I was not the obnoxious and ignorant foreigner. So in many ways I am such a fucking American, desperately believing that I am an exception to the rule, and ever so likeable.

It is pretty depressing, but on the plus side: monkeys! I made it Jigokudani YaenKoen (otherwise known as "Monkey Park") to see the famous Snow Monkeys (Japanese Macaques), which, embarrassingly enough, has been something of a lifelong dream. Monkeys running in snow and bathing in hot springs: great fun. My picture is crap, I know, so if you need more monkey action you can check out their very own webcam. Clever monkeys.

Posted by unemployed negativity at 2:29 AM